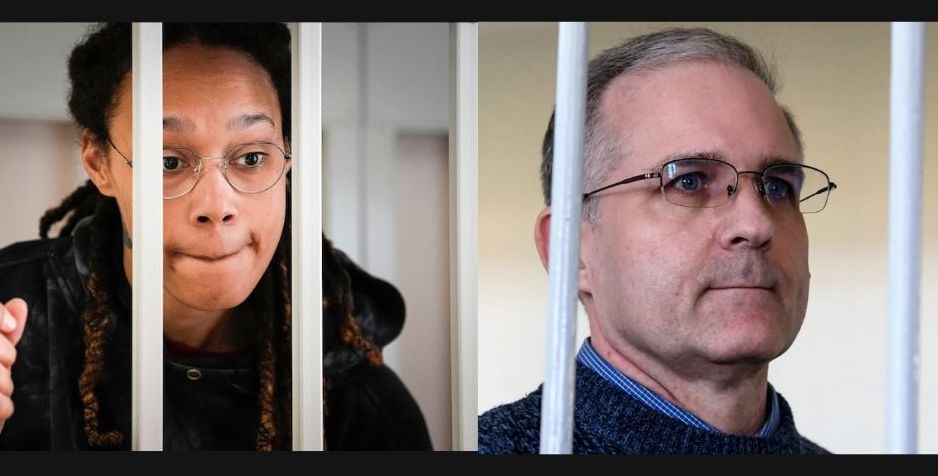 The Biden administration was able to negotiate a trade that freed WNBA all-star Brittney Griner from a Russian prison. However, another imprisoned American, Paul Whelan, could not be released with the same deal, and his family has something to say about it.

According to reports, Griner touched down in her home state of Texas on Friday. The 32-year-old’s long road home started with an arrest at Moscow’s Sheremetyevo International Airport on February 17.

Griner was charged with carrying vape cartridges that contained hashish oil in her luggage which is illegal in Russia. In August, Griner was convicted and sentenced to nine years in prison, one year less than the max for the crime in Russia.

The entire ordeal was “devastating” to her wife Cherelle, family, friends, and fans who advocated for her release from the start. Eventually, the public outcry moved U.S. President Joe Biden’s administration to get involved.

Russian authorities agreed to release Griner if U.S. officials pardoned international arms dealer Viktor Bout (aka “merchant of death”). Bout was serving 25 years in a U.S. prison for terrorism. Pres. Biden reportedly gave his approval for the swap over the past week. The final deal came together 48 hours before Griner’s release.

Despite what Biden described as “painful and intense negotiations” with Russian officials, he was satisfied with the result. At a press conference celebrating Griner’s release, Biden said, “This is a day we’ve worked toward for a long time. We never stopped pushing for her release.”

On early Thursday morning, Griner, who was dreadlock-free, was taken to Abu Dubai for a prisoner exchange. From there, she was headed back to Texas to reunite with Cherelle and other loved ones.

“We sincerely thank you all for the kind words, thoughts and prayers – including Paul and the Whelan family who have been generous with their support for Brittney and our family during what we know is a heartbreaking time.”

This same deal, meanwhile, could not be reached for fellow imprisoned American Paul Whelan.

Why was American prisoner Paul Whelan left in Russian prison?

Whelan was arrested in Moscow in December 2018. The corporate security expert claims that a “friend” planted a flash drive containing classified information in his pocket and framed him. As a result, the Michigan native was arrested and charged with espionage.

Since being convicted in 2020, Whelan has been serving out a 16-year sentence. Although the U.S. officials classify him as “wrongfully detained,” Russian authorities are not convinced.

During a White House press conference, Pres. Biden expressed that the goal was to bring two Americans home – Griner and Whelan. However, Russia had other plans.

“This was not a choice of which American to bring home,” he said. “Sadly, for totally illegitimate reasons, Russia is treating Paul’s case differently than Britney’s.”

Echoing the failed attempt to bring Whelan back to the U.S., White House press secretary Karine Jean-Pierre said, “It was either Brittney or no one at all. We’re not going to apologize for that.”

What does Whelan’s family think about Griner’s Release?

Though his brother was not released, David Whelan supported the administration’s decision: “The Biden Administration made the right decision to bring Ms. Griner home and to make the deal that was possible, rather than waiting for one that wasn’t going to happen.”

He added, “It is so important to me that it is clear that we do not begrudge Ms. Griner her freedom. As I have often remarked, Brittney’s and Paul’s cases were never really intertwined. It has always been a strong possibility that one might be freed without the other.”

Even though negotiations did not work out for Whelan, Pres. Biden remains dedicated to his future release saying, “we won’t give up” on getting him home. Griner’s wife Cherelle also expressed her desire to help Whelan make it back home.

During a White House press conference, she said, “BG’s [Brittney Griner] not here to say this but I will gladly speak on her behalf and say that BG and I will remain committed to the work of getting every American home, including Paul [Whelan], whose family is in our hearts today as we celebrate BG being home.”

What’s next for Griner?

KENS5 reports that Griner will undergo an extensive medical evaluation at Brooke Army Medical Center, which is located on base. In addition to electrolyte imbalances, doctors at UT Health San Antonio will check for infections and anemia. A medical professional will also assess any injuries she may have suffered. There is no word on whether she will pay for the WNBA again.