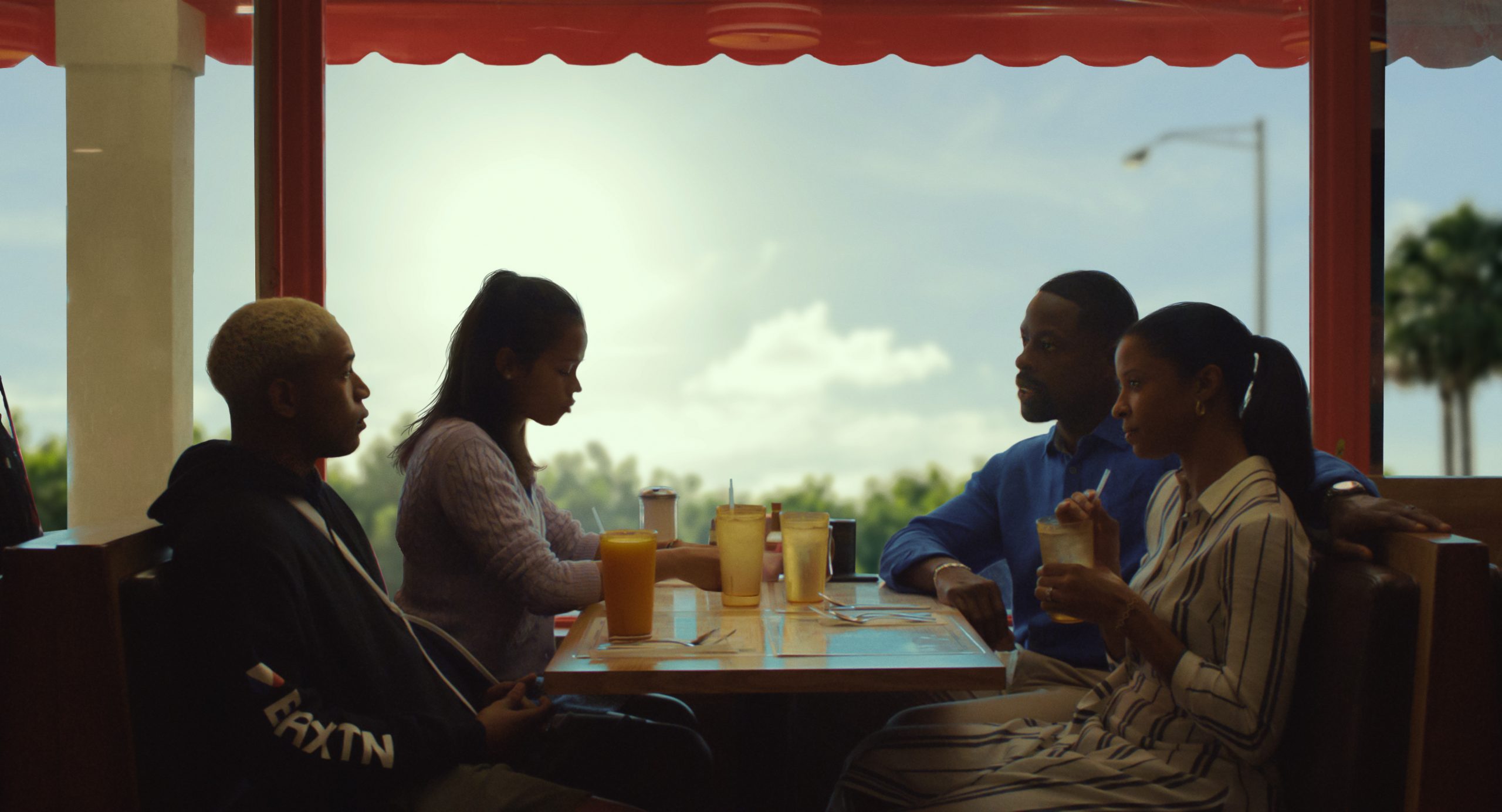 Waves is a different kind of drama than we are used to seeing for a Black family. Although it is written and directed by Trey Edward Shults, who is white, Waves intersects the struggles of upward mobility and class with echoes of race. Not only does it feel authentic for this family, but it’s often raw and vulnerable, a lot of times painfully so. Centered largely around 17-year-old Tyler who is a handsome, wrestling star played powerfully by rising star Kelvin Harrison, Jr. and his family, which includes his younger sister Emily (Taylor Russell), demanding father Ronald brought to life by Sterling K. Brown and loving stepmother Catharine (Hamilton star and Tony winner Renée Goldsberry), the central drama revolves around Tyler and his relationship with his father.

Driven out of love and fear for what the world has in store for Black boys in general, Brown’s Ronald pushes Tyler to succeed, a lot of times beyond his limits. The result is disastrous as Tyler turns inward and shuts down emotionally. As the story unfolds, he spirals. He pushes his body well beyond its capabilities, resulting in tremendous damage that he ignores. Over time his toxic relationship with his father leads him to a codependent and toxic relationship with his girlfriend Alexis (Alexa Demie who plays Maddy Perez on Euphoria).

For Harrison, Jr. (who, along with his award-worthy portrayal of Tyler, has also given strong performances in the films Luce, Monsters and Men and It Comes at Night as well as the TV show Godfather of Harlem), his acting career is taking off at an important moment of time. “I’ve been very privileged and very blessed to be able to come into the industry at a time where we really want to touch upon what’s been going on with black boys,” he told a crowd at Atlanta’s SCADShow during a promotional screening for the film in October.

“It’s just a different world and guys, we’re exploring masculinity, we’re exploring so many different ideas so I was excited to kind of break those boundaries of those boxes that people try to put us in and show the vulnerabilities and complexities of who we are and the intelligence that we bring,” he continued.

In a world where we are inundated with images of Black men being killed by police especially, Ronald’s paranoia is understandable. On top of that, Ronald is well-aware of the double standards placed on Black men and is determined to do all he can for his son to succeed against the odds.

“When you do have these young black boys, you have to work extra hard not to make decisions based in fear,” shared Brown, who has two young sons. “You have fears. You have these concerns. You want to see them return home safely. But you got to try to take a deep breath and make sure that you don’t let fear govern everything that you do.

“Love is the guiding force, but you’re also dealing with a man who lost his first wife to a drug overdose, who had to raise his children on his own for a period of time until he found Catharine and now they have a family, but he knows how fragile family can be. He’s already lost his center and so he’s terrified to lose this boy.”

Lost in the shuffle of this dynamic is Emily, the younger sibling. “She’s kind of like the lost child in the family or that kind of archetype that, on one hand, your parents think ‘I don’t have to pay as much attention to this child because she’s going to be okay,’” Russell explained. “But, because of that, you kind of fall into the shadows a little bit and kind of have to do it on your own and it’s like a blessing and a curse, because you’re not seen but you have the opportunity to see yourself I guess. And that’s an interesting challenge I think when you’re a teenager.”

Waves is in theaters now.

TV’s Niles Fitch Shares What Made Him Nearly Tear Up