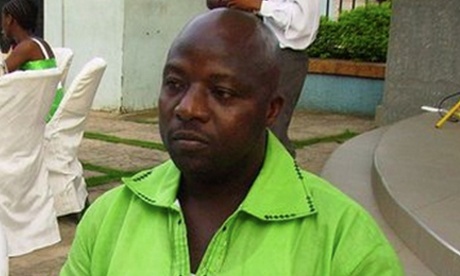 Thomas Eric Duncan, the first person ever diagnosed with Ebola in the United States, died Wednesday morning, according to the hospital in Dallas that had been treating him.

Duncan’s death came eight days after his diagnosis, which set off a panicked search for anyone who may have had contact with him and sparked new fears over how ready hospitals and government agencies are for any additional Ebola cases in the country. He died at 7:51 a.m., Texas Health Presbyterian Hospital said.

“He fought courageously in this battle,” the hospital said in a statement. “Our professionals, the doctors and nurses in the unit, as well as the entire Texas Health Presbyterian Hospital Dallas community, are also grieving his passing. We have offered the family our support and condolences at this difficult time.”

The Duncan family said in a statement that they are devastated by the news of his death, particularly given that he had recently been receiving experimental treatments. They also alluded to the fact that Duncan’s entire treatment came after considerable delays that remain unexplained.

A 2011 photo of Thomas Eric Duncan at a wedding in Ghana. (Courtesy of Wilmot Chayee/via AP)

“We had high hopes that Thomas would survive this scourge and we were optimistic that…delayed hospital protocols would help Thomas survive,” the family said. “We are hopeful that remedies here and and in parts of the world will be taken for those who have become inflicted with this horrible disease.”

Duncan had first sought treatment on Sept. 25, five days after he arrived in Dallas. But for reasons that still remain unclear nearly two weeks later, he was released by the hospital, despite telling them that he had traveled from Liberia and that he had a fever and some abdominal pain.

It is unclear why he was released. The health-care system that runs Texas Health Presbyterian initially said that a nurse had not shared Duncan’s travel history with the entire medical team, releasing a statement saying that his travel history was not visible to both the doctor and the nurse in the hospital’s electronic medical records. The hospital reversed course late Friday night, saying that the travel history was visible to both the doctor and the nurse, but it still has not explained how the mistake was made.

Dallas County Judge Clay Jenkins and a family pastor told Louise Troh, Duncan’s fiancee, about the man’s death on Wednesday morning. George Mason, Troh’s pastor, said that the news came as a shock to Troh and Duncan’s family because they did not think his death was “imminent.”

“She expressed all the what if’s: What if they had taken him right away, and what if they had been able to get the treatment to him earlier,” Mason said at a news conference on Wednesday

Troh was last able to speak with Duncan by phone on Friday, before his condition deteriorated, Mason said.

Like Troh, other relatives were grief-stricken in the wake of Duncan’s death. Mawhen Jallah, one of Troh’s daughters, sobbed during a phone call Wednesday. “I am so sad for Eric,” she said. ​Youngor Jallah, Troh’s other daughter, could be heard weeping in the background during a different phone call on Wednesday morning.

Family members in Dallas were able to see Duncan on Monday at the hospital via a laptop camera in his hospital room. He was on dialysis and a respirator, according to health officials. Saymendy Lloyd, a family spokeswoman, had said that the family was told that Duncan’s liver was improving and his fever was dropping.

Duncan has been in isolation since he was brought back to the hospital in an ambulance on Sept. 28. However, this was more than two days after Duncan first sought treatment. Some of those close to Duncan said they felt he was not properly treated because he was not American.

“He is a Liberian man,” Massa Lloyd, a close friend of Troh, said Wednesday. “The family feels he wasn’t getting the right treatment because he was an African man. They feel America is fighting only for the white man, not the black man.”

The loss was described as particularly painful because of the delay in Duncan’s treatment, which allowed him to interact with other people while symptomatic and prevented him from getting care sooner.

“It’s devastating,” Princess Duo, 32, a longtime friend of Troh’s and her family. “It’s not just the fact that he’s dead. But it’s just the way in which it happened. That’s what hurts the most.”

Duncan was one of a handful of other Ebola patients who have received experimental drugs during the course of the outbreak. Two U.S. missionaries infected this summer while working in West Africa were given doses of another unapproved drug, known as ZMapp, but the limited supplies of that drug were soon exhausted. An experimental medicine from a Canadian company, Tekmira, was given to another American doctor who was flown to Nebraska from West Africa for treatment.

The fifth American to contract Ebola in West Africa arrived in the United States for treatment on Monday as the first patient diagnosed with the deadly virus on U.S. soil fought for his life at a Dallas hospital, officials said.

A private plane carrying Ashoka Mukpo, a freelance cameraman for NBC News who contracted Ebola in Liberia, landed in Omaha en route to the Nebraska Medical Center, NBC reported. The plane was met by an ambulance manned by workers in yellow protective suits, NBC video showed.

Dr. Thomas Frieden, director of the U.S. Centers for Disease Control and Prevention (CDC), said on Monday said his agency would work “very closely” with the Nebraska hospital, which treated another Ebola patient in recent weeks.

“We’ll also make sure that doctors and nurses, the whole team taking care of him, does that in a way that doesn’t put them at risk by providing them with support,” Frieden said, speaking on NBC’s “Today” program.

The Nebraska hospital had treated and released Dr. Rick Sacra, an American missionary who contracted Ebola in Liberia, last month. Sacra was admitted to UMass Memorial Medical Center in Worcester, Massachusetts, on Saturday for a likely respiratory infection but tested negative for Ebola, hospital officials said on Sunday. He was being removed from isolation.

Duncan became ill after arriving in Texas from Liberia two weeks ago, heightening concerns that the worst Ebola epidemic on record could spread from West Africa, where it began in March.

Frieden, who was slated to brief President Barack Obama later on Monday, said health officials were closely monitoring 10 people who had direct contact with Duncan and are considered at greatest risk. So far none has shown any symptoms, he added.

Another 38 people who potentially had contact with Duncan are also being tracked, he said. Ebola, which can cause fever, vomiting and diarrhea, spreads through contact with bodily fluids such as blood or saliva.

The U.S. cases come as death toll from the deadly epidemic rises. It has killed more than 3,400 people since it began in West Africa in March and has now begun spreading faster, infecting almost 7,500 people so far.

Frieden emphasized on Monday the importance of rehydration in treating Ebola patients, especially given the lack of available doses of the experimental drug ZMapp, produced by San Diego-based Mapp Biopharmaceutical.

“We don’t know if ZMapp works, but there’s no more of it now. The company’s working hard to make a few more doses, but it’s hard to make. It takes a long time,” he told NBC.

A second experimental drug, made by Canada’s Tekmira Pharmaceuticals Corp, “can be quite difficult for patients to take,” he said, adding that the doctor and the patient’s family would decide whether to use the drug.

On Sunday, Frieden told CNN that the CDC was not aware of any such drugs being used for Duncan, who remains in critical condition Texas Health Presbyterian Hospital in Dallas.

The Texas case highlighted problems that U.S. public health officials are trying to address: The hospital that examined him initially did not recognize the deadly disease and sent him home with antibiotics, only to have him return two days later in an ambulance.

U.S. health officials and the White House have expressed confidence the disease will not spread widely within the United States, and U.S. officials are scaling up their response in West Africa, where Ebola presents an enormous challenge.

Anthony Fauci, director of the National Institute of Allergy and Infectious Diseases, has said suspending flights to and from affected countries or imposing a visa ban on travelers from those areas should not be done and on Monday said officials continue to look at airport screening.

“All options are going to be looked at,” he told CNN. “The discussion is: Is that extra, added layer of screening going to be worth the resources that are put into doing it?”

But the virus’s 21-day maximum window for symptoms to appear makes it difficult, he said, adding that “to bring someone to an airport and keep them there for 21 days and make sure they get exposed to nobody and then let them on the plane? That would be absolutely impossible.”