Tupac and 8 Rappers Who Brought Politics to Hip-Hop 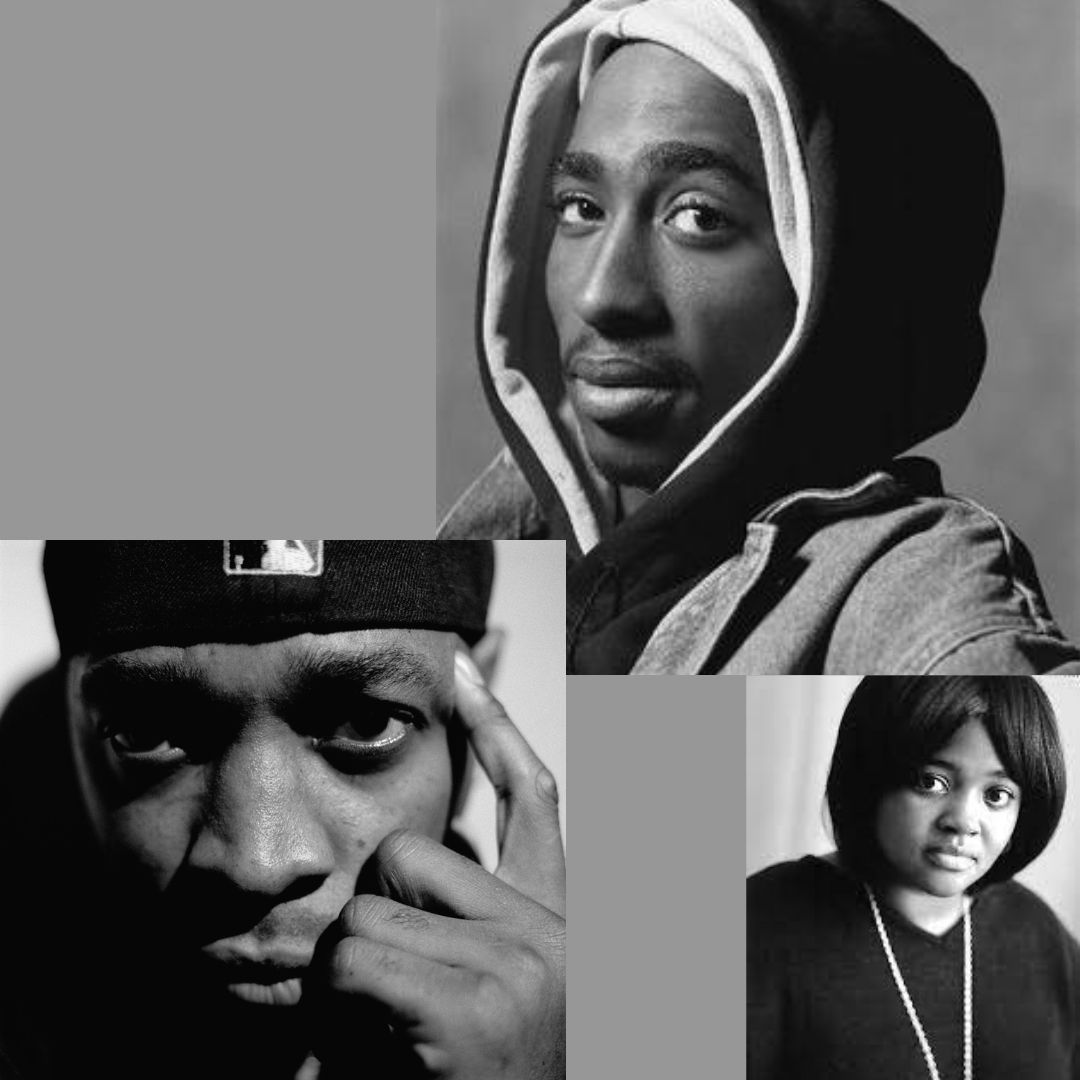 Legendary rappers like Tupac Shakur and Sister Souljah have fused hip-hop culture and politics through music, messaging and even candidacy to empower Black youth for nearly 50 years.

Hip-Hop is a cultural movement made up of various elements including rapping, DJing, and graffiti art that grew from a block party in the Bronx, N.Y., on August 11, 1973. From the beginning, even when circumstances were unfavorable, hip-hop and politics have always intersected.

From 1977-1989 New York City mayor Ed Koch made the “War on Graffiti,” a primary area of focus. Early in his term, he put dogs and razor wire around subway yards to dissuade graffiti artists, stating “If I had my way, I wouldn’t put in dogs, but wolves.” In 1983, this political animus towards hip-hop led to the death of artist Michael Stewart at the hands of Public Transit Police Officers.

Stewart’s murder sparked protests and demands for justice. The six officers were eventually acquitted, and Michael Stewart’s family was compensated $1.7 million for his death. Spike Lee paid tribute to Stewart in his classic film “Do the Right Thing” with the death of Radio Raheem. And the now iconic graffiti artist Jean-Michel Basquiat depicted Stewart’s death in a piece titled “Defacement (The Death of Michael Stewart)”.

With the 2024 Presidential Election and the 50th anniversary of the 1973 block party on the horizon, Upscale is highlighting eight rappers who have influenced America’s political landscape by running for office, mobilizing communities, offering political education and through music.

Political mobilization is defined as activities designed to motivate large groups of participants to express themselves, take specific political action, and accomplish identified political aims. Mobilization is a foundational mark of hip-hop culture, yet few artists have wielded the mobilization power of Tupac Shakur.

Born into a family of revolutionaries, his mother Afeni Shakur and father Billy Garland were leaders in the Black Panther Party. His step-father Mutulu Shakur was a member of the Black Liberation Army, and has been a political prisoner for 35 years. On November 10, 2022 the United States Parole Commission granted Mutulu Shakur release on parole effective December 16, 2022.

Tupac Shakur launched his rap career in 1989 at the age of 18, and quickly moved from Digital Underground roadie, to featured artist on the single “Same Song”, to releasing his critically acclaimed debut “2Pacalypse Now“. Throughout his career, until his murder in 1996, Shakur used his platform to motivate the masses to express themselves for larger political aims.

One of the greatest illustrations of this is the fiery speech he delivered at the Indiana Black Expo during the summer of 1993. It was during this speech that he challenged the Black community to unite against white supremacy by educating and guiding the youth. Through the T.H.U.G.L.I.F.E. (The Hate U Give Little Infants F***** Everyone) code of conduct, Shakur sought to make our communities safer by mobilizing Black men across the country involved in street gangs. Even after his death, the Tupac Amaru Shakur Foundation and the documentary “Resurrection” are guideposts that continue mobilizing communities today.

Another rapper who brought political mobilization to hip-hop was Sister Souljah. A Bronx, New York native, early in life, Souljah recognized the value of learning African history. As a teenager she was a legislative intern in the House of Representatives. While a college student at Rutgers, she traveled widely spending time in Paris, Russia, Spain, and Portugal among others. But it was Souljah’s trip to apartheid-era South Africa that sparked her successful mobilization of Rutgers’ students in 1985. Her leadership led to the university divesting $3.6 million in financial holdings, and the state of New Jersey divesting $1billion of its financial holdings in South Africa.

After graduating from Rutgers and serving as a national political organizing leader for several years, Sister Souljah became a full member of the rap group Public Enemy. In 1992 she released her only album “360 Degrees of Power”. During that same year, presidential candidate Bill Clinton publicly criticized statements Souljah made about the LA Riots, which gave his campaign a needed boost. This led to the coining of the phrase “a Sister Souljah moment” to describe a politician’s public rejection of controversial views thought to be associated with their own party.

Political education is the formal and nonformal teaching and learning process of developing civic competencies. During hip-hop’s golden age 1986-1993, artists such as KRS-One, Rakim, Queen Latifah, and Public Enemy used their songs, videos, and even fashion as vehicles for civic engagement. In 1986 the song “A.F.R.I.CA.” by Statsasonic became a conduit of political education, as the lyrics amplified liberation movements happening in countries throughout the continent of Africa. Today, unlike the golden era, rappers are more widely accepted within mainstream politics, allowing political education to occur in more spaces. Atlanta rapper Killer Mike is an example of this.

Killer Mike was raised in Atlanta by his grandparents. They were civically engaged and active in the community, so political education was part of his upbringing. By age 14, school mate and future Atlanta City Councilor Kwanza Hall invited Mike to join Black Teens for Advancement, an anti-violence organization started by Hall. After high school, Mike attended Morehouse College for a year, before eventually connecting with Big Boi from Outkast. In 2000, Mike was featured on Outkast’s album “Stankonia” and in 2002 he earned a Grammy for his verse on the song “The Whole World”. Over the next 10 years, Mike released five albums, and opened his first barbershop in partnership with his wife Shana.

In 2015, Mike ran for the Georgia House of Representatives as a write in candidate to raise awareness about the importance of special elections. During the same year, he endorsed Senator Bernie Sanders’ 2016 Presidential Campaign, attending rallies and interviews with him. In the years since, Mike has continued using contemporary moments to provide political education in real time through traditional and social media. During the 2022 Georgia Senate Runoff Election, Mike interviewed Democratic Candidate Senator Raphael Warnock at his southside SWAG Shop location, to be aired on PBS.

Though not reflected in her music, Cardi B is a rapper who has contributed to the political education of hip-hop culture. In 2017, she spoke out in solidarity with Colin Kaepernick and his protest of police violence. And during the 2020 election cycle, she used Instagram and Twitter to influence her followers, even going live with Senator Bernie Sanders. In 2022, during her episode on the Netflix original “My Next Guest Needs No Introduction with David Letterman,” Cardi talked about her lifelong love of politics and desire for everyday people to recognize the power of their voice. She stated, “I don’t really put a lot of political things in my music, but I use the f*** out of my platform.”

While mobilization and political education have influenced hip-hop culture, it is rap, the music element of the culture, that is the most accessible to creators and consumers. Rap music is one of the most popular genres globally, and it has been utilized in various ways as a political tool. During the golden age, in response to the violence within hip-hop and the larger Black community, rapper KRS-One founded the rap artist collective Stop the Violence Movement. With D-Nice on production, the collective released the song “Self-Destruction” in 1989, raising over $100,000 for the National Urban League.

Thirty years after this transformative moment, two independent artists, Chika and YelloPain, are carrying on tradition.

Born in Montgomery, AL, Chika gained widespread attention after going viral on Instagram the day after the 2016 Presidential Election. Two years later she went viral again following the release of “A Letter to Kanye Omari West”, a song set to Ye’s own “Jesus Walks” beat. In the song Chika questions his support of Donald Trump and endorsement of Candace Owens. She again used rap as a political tool in 2019, with the release of the song “Richey v. Alabama” which addressed the recently passed Alabama abortion bill. Chika performed the song on Jimmy Kimmel Live, at the invitation of guest host Lena Waithe.

During the 2020 election cycle, Dayton, OH rapper YelloPain released the song “My Vote Don’t Count” in support of his cousin Desiree Tims who was running for Congress. The song and video explain the practical elements of electoral politics and went viral, creating teachable moments for adults and children alike.

In 2011, Che “Rhymefest” Smith a rapper and Grammy-winning songwriter, ran for alderman of Chicago’s 20th ward. Unlike rappers Uncle Luke and Wyclef Jean before him, Smith’s standing in the community and history of civic engagement made him a strong political contender. His desire to empower those in his community was at the heart of his campaign.

In the end, Smith forced a runoff election, but the incumbent won by just 300 votes. The outcome of the election motivated Smith to continue advocating for his community and utilizing hip-hop as a tool for political education.

And in this era of politics, hip-hop has the potential to be that and so much more.