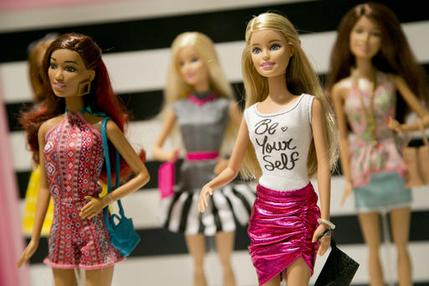 Barbie’s got a brand new bod.

Mattel, the maker of the iconic plastic doll, said it will begin selling Barbie with three new bodies – curvy, tall, and petite. The doll will also be available in seven skin tones, 22 eye colors and 24 hairstyles.

The El Segundo, California, toy company will also continue to sell the original Barbie. The new options come after years of criticism that Barbie had created unrealistic expectations for girls.

The new cover of Time magazine, which first reported the changes, touches on topic with the headline, “Now can we stop talking about my body?”

The doll has changed in some ways already. New skin tones and looks were added last year. And Barbie’s foot was movable for the first time, allowing her to kick her heels off and wear flats.

Mattel has been searching for ways to recharges sales of Barbie, which fell 4 percent in the most recent quarter as ‘want lists’ from girls increasingly include iPads and other things.

The new body types were in the works for the past two years, said Mattel spokeswoman Michelle Chidoni.

Whether kids will pick up the new dolls remains to be seen, though Chidoni said previous changes were “positively received.”

Mattel would not provide sales figures, but some marketing experts say more will have to be done to return Barbie to her former glory.

“The look of the dolls is great,” said Marc Rosenberg, a marketing consultant in Chicago that has worked in the toy industry for 25 years. But in order to connect with kids, the new dolls need to be added to Barbie YouTube videos, apps and shows, said Rosenberg.

Dolls with the new body are available for preorder at shop.mattel.com, and will ship in February. They will start to show up on U.S. store shelves in March and roll in the rest of the world after that, Mattel Inc. said.

© 2016 The Associated Press. All rights reserved. This material may not be published, broadcast, rewritten or redistributed. Learn more about our Privacy Policy and Terms of Use.