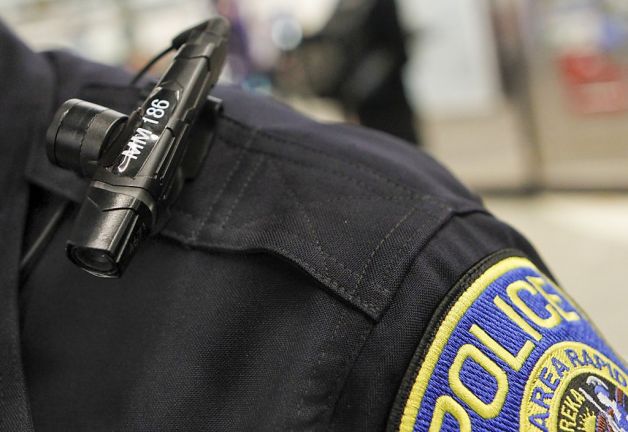 A year ago, the notion that police officers across the country would wear body cameras seemed novel, with only a few dozen departments, most of them small, willing to give it a try. Within the past few months, big cities such as Washington, Los Angeles and New York cautiously began pilot programs.

But after the police shooting in Ferguson, Mo., and the debate it raised over accountability and trust, there is no longer a question of whether such cameras will become standard police equipment.

“The body camera is here to stay,” said Anne T. McKenna, a civil litigator in Baltimore and an expert on electronic surveillance and privacy law.

President Obama gave the issue a significant push Monday when he proposed reimbursing communities half the cost of buying cameras and storing video — a plan that would require Congress to authorize $75­ million over three years to help purchase 50,000 recording devices. Studies indicate complaints against officers drop when incidents are recorded, although there is not enough data yet to make conclusive claims.

The mass introduction of the small cameras — which run from a few hundred dollars to $1,000 each — raise complicated questions about privacy, cost and what will become of countless hours of video.

Policing experts who support officers wearing cameras are worried about moving too fast, without clear rules about when officers should turn cameras on and off, how to store the massive data generated daily and how long to keep the footage. Authorities say technology has surged ahead of state privacy laws and question whether there has been enough thought about whether the videos should be made public.

“There is so much to grapple with,” said McKenna, who also teaches privacy law at Pennsylvania State University. The lure is that cameras will improve trust, for both the public and the police, who generally believe videos will most often back their perception of events.

McKenna noted the vastly different recollections of witnesses in Ferguson about whether Michael Brown, the unarmed 18-year-old killed by police officer Darren Wilson, was charging or surrendering when Wilson fired the fatal shots.

“If we had a body camera in that situation, think how different it would be now,” McKenna said. “This debate over what the officer said happened and whether the man had his hands up, we wouldn’t be talking about it.”

But some authorities worry that after a police shooting or other confrontation, residents will expect to see the video almost immediately, like an instant replay in football. “The public and everyone believes that in the wake of Ferguson, if that happened in a city with body cameras, that the video would be released to the public,” D.C. Police Chief Cathy L. Lanier said. “That is not the way it works.”

Lanier said videos would generally be withheld from public view until trial or the end of an investigation, which can take years. But she said knowing a video exists should help ease tensions. “Body cameras will capture the truth,” the chief said.

Lindsay Miller, a senior researcher with the Police Executive Research Forum who co-authored a report on body cameras, urges that departments implement “broad public disclosure” rules. “The public is going to expect it,” she said.

Some of the nation’s largest police departments are trying cameras out, and more are expected to join them. The New York Police Department announced in the fall that it would outfit 60 officers with cameras, in part because of a federal judge’s order to curb stop-and-frisk tactics.

D.C. police began a pilot program in September. In three months, 165 officers around the District have recorded tens of thousands — possibly hundreds of thousands — of hours of video. Lanier said she may end the six-month pilot ahead of schedule and start implementing a camera program across the 4,000-member department.

D.C. police issued an 18-page “special order” that is publicly available on the Internet, which spells out in detail how and when officers should hit the record button. It includes virtually all interactions with the public. Many departments carve out exceptions for interviewing witnesses and informants and the casual banter with the public that is widely encouraged as part of community policing. Some officials worry the cameras may discourage people from giving officers tips or information.

D.C. police will keep a recordings for 90 days unless it is needed for court.

The Police Executive Research Forum, which advises police agencies across the country on best practices, found that 63 of 254 departments surveyed used body cameras, but nearly one-third of those had no written policies.

“If the cameras are just slapped on police officers” without guidance, they won’t achieve the goal of “increasing community trust in police,” said Jay Stanley, a policy analyst at the American Civil Liberties Union, which supports body cameras.

Another nearly universal concern among police leaders is what happens when an officer forgets to record or there is a technical glitch during a volatile moment. “It’s not the tape that you have that causes the problem, it’s the tape you don’t have that causes the problem,” said Miller, the research associate at the Police Executive Research Forum.

And now that D.C. police have had some body cameras running for three months, a new issue has emerged — the question of public access.

The District recently denied the Washington-based Reporters Committee for Freedom of the Press a public-records request for body-camera videos worn by all officers on a single day. The city argued that it does not have enough staff, money, time and technology to redact or blur ­images on videos that police say would violate people’s privacy rights.

The journalism group is appealing, arguing that the concerns are inflated and not a legal reason to withhold a government record. The group calls it hypocritical for police to implement a program to be more accountable to the public and then deny the public access. One city, Seattle, is threatening to abandon its body-camera program, saying complying with public records requests would gobble up its budget and ­resources.

But so far, police agencies that use body cameras report positive results. James R. Brooks, deputy police chief in Laurel, Md., said use of force has gone down about 30 percent since the department began using therecording ­devices two years ago. While complaints have not seen a dramatic drop, he said, they are now adjudicated far more quickly.

Lorie Fridell, a criminology professor at the University of South Florida, said research has shown that departments with cameras see complaints and use of force go down. But, she said, “we really haven’t had enough studies documenting the positives and the negatives of adoption.”

As for the balance between privacy and transparency, she said that “there are not right or wrong answers yet. I think the police profession is still struggling with this.” But, Fridell said, policies that “reduce officer discretion” are the best practice: “The officers can’t pick and choose when to turn them on and when to turn them off.”