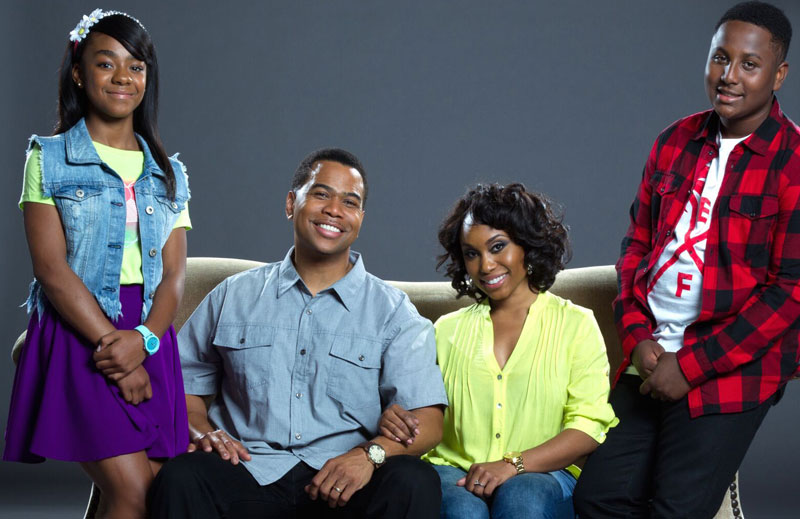 When Omar Gooding and Angell Conwell come together to play opposite of each other you can’t help but notice the instant chemistry and authenticity that they each have. Spawning a 15-year friendship, acting relationship (Baby Boy), and a four-year romantic relationship, these two are gearing up for the third season of Bounce TV’s hit show, Family Time.

Family Time, which follows the Stallworth family and their new beginnings after winning the lottery and relocating, shows that family isn’t perfect but they are always here for you to weather the storm. Created by Bentley Kyle Evans (Martin, The Jamie Foxx Show), we learn how high school sweethearts Tony (Omar Gooding) and Lisa (Angell Conwell) can make it through anything while battling to fulfill their own personal lives and keeping up with two mischievous kids, Devin and Ebony.

Samantha Denäe (SD): How did you get approached for ‘Family Time’?

Angell Conwell (AC): Basically for me it was through word of mouth and then I ended up going to a producer session with Bentley and Stacey Evans Morgan [The Evans family] and I read for another character for the show and Bentley, who is the executive producer and creator of the show, saw me as Lisa, so basically that’s how it happened for me.

Omar Gooding (OG): Well first I met Bentley on another show called Love That Girl and then he told me about a series he wanted to develop called Family Time and like Angel, I read on Friday and we started shooting on Saturday.

Angell Conwell: Ok not that fast but it did happen pretty quickly. It felt like everything happened all in one week.

How is the dynamic between your characters similar and different in ‘Family Time’ versus ‘Baby Boy”?

OG: (laughs) Well we were a lot younger in Baby Boy – that was about 15 years ago now.

OG: But I mean we were in a relationship then and we didn’t have kids. Now we’re grown.

AC: And you know in Baby Boy it was a lot more intense. It was kind of more on the dramatic side I would say, but now it’s situation comedy so it’s more lighthearted I would say.

How is the chemistry between you two as actors and playing roles where you’re married and parents and in a family?

OG: It works out great, I mean we’ve always gotten along and we stayed good friends throughout the 15 years of knowing each other, so it was very important that we were able to land this role opposite of each other.

AC: Right and I feel like we’ve always had a playful banter and I think it translates on camera which is always a good thing.

What is your definition of family time in your personal lives?

OG: Food, lots of food – home-cooked food and a lot of laughs. It’s pretty simple to me. When you get a chance to get together with the entire family – I know Angel’s situation is a little different than mine because her family is out of town.

OG: I mean, mines feel like they’re out of town but anytime we get a chance to hang out together and laugh, it’s good.

AC: I think anytime you’re able to let your guard down and just relax and be yourself and not have to worry so much about the outside world I think that’s what family time is. Family time can even be time with your friends. I feel like it’s whoever you have the closest vibe with and whoever makes you feel like you’re at home.

Any upcoming projects aside from the show?

AC: Same for me. I’ve been working and have been fortunate to be involved in a couple of good things, but it’s interesting you’ll film something and you think it’s going to come out at a certain time and then it comes out later but the best thing to do is to stay in touch via social media.

Alright, so let’s get into some personal questions. What are you guys most afraid of?

AC: That’s an interesting one. Actually, I hate to piggy back off of Omar’s answer but I would say the same thing – failure, that’s a pretty intense, honest one right there.

If you weren’t an actor, you would be?

AC: Um, something involving children. Probably like a child therapist or something of that nature.

OG: Probably sports. I never had the chance to play because I was always so busy. I wanted to play football. I tried out for the team when I was in high school but the coach told me that I had to be there everyday but I couldn’t because I always had an audition or had to be on set. I wanted to be a tight end. That’s what I wanted to play. I wanted to hit and catch those short passes you know and bust them heads open.

Name one thing that you love about yourself?

OG: Sense of humor. I’m able to laugh through good and bad times. It helps when you’re upset about your team losing to just laugh it off (laughs) but I like to make people laugh.

AC: Ah, that’s interesting. I feel like the ability to put others first at times. I guess generosity. I think I can be a generous person even when it’s not easy for me to be or convenient, I’d say that.

Name one thing that you would change about yourself?

AC: Well that’s interesting to have the same answer for both questions because I would change that but I do always wish I was a little bit more carefree. I wish I could lift a little bit of the burden off my back at times and just live a little bit more in the moment instead of thinking so far ahead or so far behind.

OG: That’s a tough one. I think I would change my metabolism so I wouldn’t have to workout so much. My brothers have a real quick metabolism it’s like they burn the food while they’re chewing it! The rest of us we have to work a little harder at it.

This may take a little bit of thought, but who are you?

OG: Uh, tired…no, no, no. I’m someone who sticks it through and does it his way. When it’s all said and done I want them to say he chose good work, he did good work and hopefully someone you can look up to when you look at my body of work and my overall my work ethic. We really try hard to put out our best work. We try to put out the best product.

What do want fans to take away from ‘Family Time’?

OG: It’s genuine, it’s funny, you know? I just want them to tune in most of all and give us their honest opinion and feedback and let us know what we can do to help with programming, if at all. It’s different nowadays, most people are into reality shows and moving away from sitcoms and we really want to revive sitcoms like what I used to grow up with and watch and enjoy. We stay current. We’re hip and edgy. Just tune in.

AC: I think one thing is that we’re a family but we’re not a perfect family. Everything isn’t perfect and I think I want people to take away that nobody is perfect and it’s ok to work through your issues with the ones that you love and sometimes it’s easier that way.

Catch the season 3 premiere of Family Time on October 6 at 9/8C only on Bounce TV – I promise you will fall in love with the Stallworth’s playful wit and loving family. Also, follow Omar Gooding and Angell Conwell on all thing social media.

FROM THE THRILL OF SAFARI TO SEASIDE GETAWAYS, KENYA HAS SOMETHING FOR EVERYONE