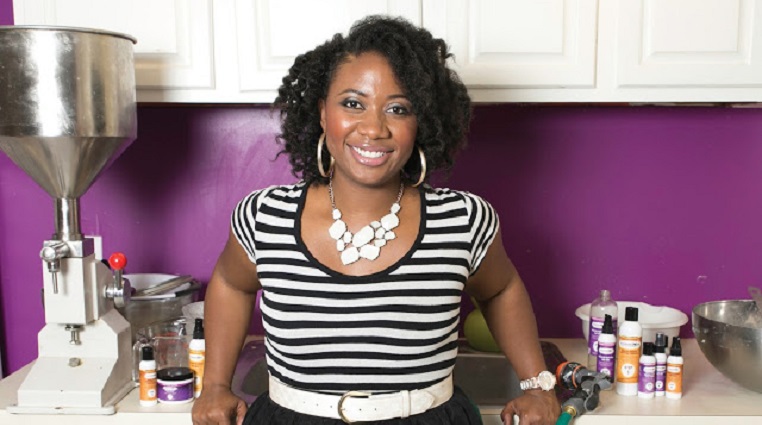 Gwen Jimmere was 30 days away from her divorce being final when she was laid off from her job. She had to pay the bulk of the attorney fees in the separation, leaving the Detroit, Michigan mom with $32 in her bank account. Her son Caiden was two-years-old.

When she was pregnant with Caiden, she started creating her own hair products, sparked by Chris Rock’s film “Good Hair”. It was specifically the scene where a soda can placed in relaxer breaks down. She instantly decided that she would stop using hair relaxers, so she went to the store to find alternate products that worked, but couldn’t find any.

Five months later, she emerged from her kitchen with products that worked, and a process that cut her hair routine down to 30 minutes.

After being laid off, instead of searching for another job, Jimmere decided to start selling the handmade hair products, currently known as Naturalicious.

She turned her basement into a production studio, where she mixed, bottled, packaged and shipped every order herself. Next, she approached a Whole Foods that was opening near her about carrying her items in their store, with the attitude that the worse that they could say was no.

They accepted her offer, and four years later, Naturalicious is sold in 2,500 locations worldwide, select Whole Food stores, and ships over 3,000 orders a month!

She perfected the “Hello Gorgeous Hair Care System”, which does the work of 13 products in three simple steps. It is the only sulfate, paraben, mineral oil, petroleum, gluten and cruelty-free line of products.

As the CEO and Founder of Naturalicious, she made history as the first African-American woman to hold a patent for a natural hair care product.

Jimmere is a winner of the Black Enterprise Elevator Pitch Competition, was named one of the 25 Most Powerful Women; and in 2016, was a Root 100 Award honoree as one of the 100 Most Influential African Americans in the U.S.

She turned a difficult moment of her life into a series of blessings and sweet moments. Caiden, who is now six, even works with her as CCO (Chief Candy Curator), and hand picks and packs a piece of candy for each customer’s order.

Jimmere donates her company’s bestselling beauty products to organizations focused on helping women in transition, and partners with the nonprofit organization, Services to Enhance Potential (STEP), to offer jobs to men and women with special needs at the Naturalicious production studio.

The hair-care entrepreneur is showing us all what it looks like to rise above life’s challenges and help others to rise above theirs. May Jimmere continue to do great things, make history and inspire the world!