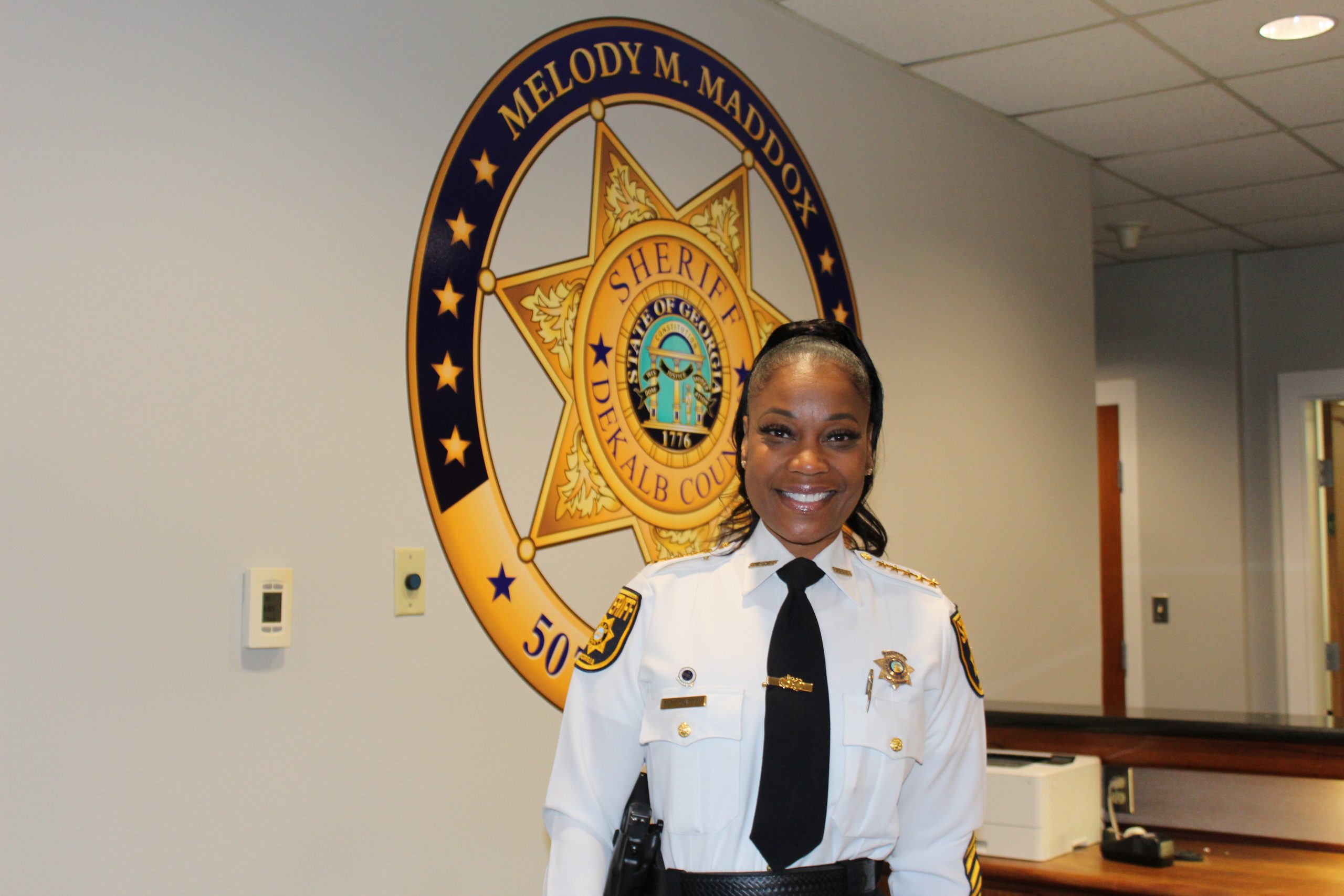 Sheriff Melody Maddox’s rise from teen mother to first-elected female sheriff of DeKalb County, Georgia is a rare story of faith and determination.

Born in Atlanta, Georgia, Maddox grew up with her grandparents while her parents traveled with the military. Once her mother returned from the Air Force, she and her brother moved back and forth with her between Atlanta and Detroit, Michigan. As a young girl, Maddox did not like the instability of moving and opted to stay in Atlanta with family.

She was several months pregnant when she graduated from Joseph E. Brown High School in Atlanta. Her decision to enter the law enforcement field came as a result of a challenge, not a choice. In 1988, her daughter’s uncle, an Atlanta Police Officer, challenged her saying she couldn’t get into the Atlanta Police Department.

“I’m the kind of person that one should not challenge because you’re not going to win,” Maddox said.

He challenged her, and she got in the police force. Maddox maintains, “I didn’t want to be a police officer; I wanted to be a flight attendant for Delta.”

Once employed with the Atlanta Police Department, she found that it wasn’t bad. However, she really wanted to go to college. Fascinated by the show “A Different World,” she envisioned herself in college. But in the back of her mind, she didn’t think she could do it as a single mother, as her daughter was 4 years old.

One morning she woke up feeling stressed and said to herself, “I’ve got to make this right. I’ve got to do this for my daughter.” She had awakened to a commercial for Morris Brown College. As a child she went to Morris Brown College parades and admired the Bubbling Brown Sugar majorette squad and longed to be a majorette. On that morning, with tears in her eyes and only $5.00 she decided, “You can eat or put gas in your car and go to Morris Brown and try to register.” Maddox chose to put the $5.00 in her gas tank and go register for college.

After enrolling in college, she recalls, “Driving home the gas tank in my car was empty, and I was starving. But I wasn’t hungry because I was excited. I just kept saying to myself, “I’m really going to college!”

While attending college, advisors encouraged her to try out for the Bubbling Brown Sugar majorettes and to run for Miss Alpha Phi Alpha Fraternity. At the age of 24, the reluctant, non-traditional student competed and succeeded. Maddox graduated in 1995 with a Bachelor of Science in Sociology.

She attributes her great faith to her grandmother who instilled it in her. She maintains, “My faith is very strong, and I make no apologies for it because I know who brought me through, and I’m grateful for it.”

Maddox also believes she owes her all to Morris Brown because being a student there changed her life. “As with any historically black college and university (HBCU), we were a family.”

Sacrifices that Led to Her Win as Sheriff

Maddox served as assistant police chief until she stepped down in 2014 to run for sheriff. She didn’t win and found herself out of a job and out of funds from running for office.

Often low on gas and food without a job, she still never stopped campaigning. The police chief at Georgia Piedmont College offered her a part-time position, which ultimately became full-time again. She then eventually became chief of police upon his retirement.

Sheriff Maddox maintains that she didn’t run for sheriff to be the first anything but to serve her community. She had run in four elections before Sheriff Jeffrey Mann promoted her to chief deputy when he retired in December 2019. In the November 2020 election, she won 83.79 percent of the votes.

As sheriff, Maddox oversees the care, custody and control of those awaiting trial or serving a short-term sentences in jail. She supervises sheriff deputies who endeavor to serve misdemeanor and felony warrants.

Outside of her job as Sheriff,  the 56-year-old says she mostly enjoys spending time with her grandkids and loved ones. Her daughter and grandchildren are her pride and joy, and she wants to leave a legacy for them.

3 People reacted on this