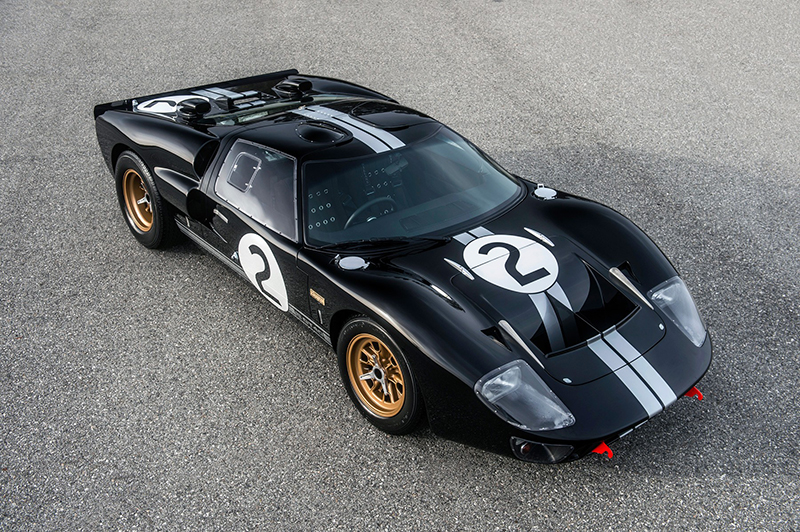 Honoring the Ford GT40’s 1966 Le Mans success, Shelby American will be building a limited run of 20 continuation models. The original car is a legend in its own right, the direct result of Henry Ford II’s desire to beat Ferrari at an endurance race. Responsible for bringing Ford to the world stage in performance and for teaching Enzo Ferrari the desired lesson at Le Mans, it is the only American car to have made the top 10 most expensive cars.

Shelby’s continuation GT40 will be based on the Mark II model and will honor the car’s dominance at Le Mans in 1966 where Ford achieved an unprecedented first, second and third-place finish. Interestingly, Bonhams is offering a rather significant 1966 model car that fits right into this narrative

“Carroll Shelby’s involvement in Ford’s Le Mans program is one of the best-known chapters in our racing history,” said Joe Conway, Co-CEO of Carroll Shelby International and CEO of Shelby American. “Carroll Shelby shared Henry Ford II’s desire to defeat the house of Enzo on the international stage to earn American automakers worldwide respect. The successful partnership between Shelby and Ford continues and can be seen in every vehicle we build today.” Well, that is a slightly more romantic version of the Ford-Ferrari battle, which was largely about two men putting their businesses in service of their egos.

Whatever version you prefer of history, the actual anniversary car aims to be as true to the original as possible. Shelby claims that more than two thirds of the components it will use are interchangeable with those on the 1966 original. Returning to those interchangeable parts, that means that while aluminum and composite are lighter and often stronger, the car will get a steel monocoque chassis and fully independent suspension. It will also have the same twin 10-gallon fuel tank set-up. And seeing as those tanks will be supplying a Ford FE 427 V8, owners hitting the open road had better select a route with plenty of gas stations. Yes, the GT40 is notoriously thirsty.

Inside, the cabin is also true to the original with Smith-style gauges, riveted racing seats with harnesses and very little in the way of headroom for taller drivers, unless it’s specified with the Gurney Bubble (a bubble put into the roof of the car so that larger drivers could fit as the original GT40 was called that because it was 40 inches tall). The only new addition is air conditioning plus the choice of right- or left-hand drive.

The car will cost $169,995 as a rolling chassis before personalization and options.