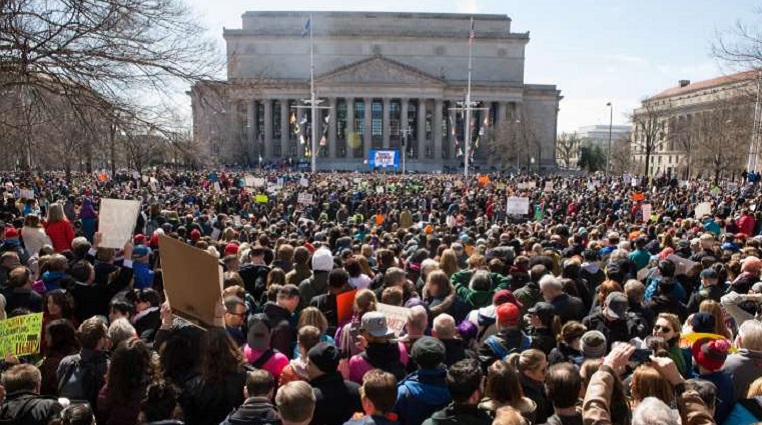 Hundreds of March For Our Lives rallies took place across the country and around the world Saturday as people called for action on gun violence.

The rallies included hundreds of thousands of protesters and speeches from activists and survivors of shootings, including survivors of the Parkland, Fla. shooting David Hogg and Emma González.

The speeches, from Parkland students and others around the country, called on law makers to take action on gun control.

Here are some of the best speeches from the March For Our Lives:

“We are going to make this the voting issue. We are going to take this to every election, to every state and every city. When politicians send their thoughts and prayers with no action, we say, ‘No more.’ And to those politicians supported by the NRA, that allow the continued slaughter of our children and our future, I say get your resumes ready,” Hogg said.

Naomi Wadler, at just 11, took the stage to address gun violence against African American women and girls that is under-reported.

“I am here today to acknowledge and represent the African-American girls whose stories don’t make the front page of every national newspaper. These stories don’t lead on the evening news,” Wadler said at the Washington D.C. March for Our Lives rally.

“In a little over six minutes, 17 of our friends were taken from us, 15 more were injured, and everyone — absolutely everyone in the Douglas community — was forever altered,” Emma González said during her speech.

González opened her speech by addressing the Parkland shooting before making her most impactful statement of the speech by remaining silent. She then did not speak while she remained on stage for just over four minutes before a timer went off.

“Since the time that I came out here, it has been six minutes and 20 seconds,” she said after remaining silent. “The shooter has ceased shooting and will soon abandon his rifle, blend in with the students as they escape, and walk free for an hour before arrest. Fight for your lives before it’s someone else’s job.”

“My grandfather had a dream that his four little children will not be judged by the color of the skin, but the content of their character. I have a dream that enough is enough. And that this should be a gun-free world, period,” Yolanda Renee King, 9, standing alongside Parkland shooting survivor Jaclyn Corin, referencing her grandfather Martin Luther King’s famous “I Have a Dream” speech.

King made a surprise appearance at the Washington D.C. March For Our Lives Rally.

Alex King and D’Angelo McDade, both students from North Lawndale College Prep in Chicago and members of the student non-violence group the Peace Warriors, walked out on stage with duct tape over their mouths. King and McDade had met with Parkland students in Florida last month as part of an outreach to groups that have not benefited from the attention of wall-to-wall news coverage that the shooting at Marjory Stoneman Douglas had.

He added, “As I stand here before you, I stand as D’Angelo McDade, an 18-year-old from the West Side of Chicago. I, too, am a victim, a survivor and a victor of gun violence. I come from a place where minorities are controlled by both violence and poverty… but today we say ‘No more!’ ”

Cameron Kasky, who also attends Marjory Stoneman Douglas High School and survived the Parkland shooting, spoke in Washington D.C. Kaksy read aloud the names of victims of the shooting, wishing one of the Nicholas Dworet a happy birthday. Dworet, who would have turned 18 next month, was killed in the shooting.

“My generation — having spent our entire lives seeing mass shooting after mass shooting — has learned that our voices are powerful and our votes matter. We must educate ourselves and start conversations that keep our country moving forward and we will. We hereby promise to fix the broken system we’ve been forced into and create a better world for the generations to come. Don’t worry, we’ve got this,” Kasky said.

Five Cool Cities for Millennials to Live in 2018

'Black Panther' Hits $1 Billion Mark In Worldwide Box Office Numbers ... But We Knew That Would Happen!