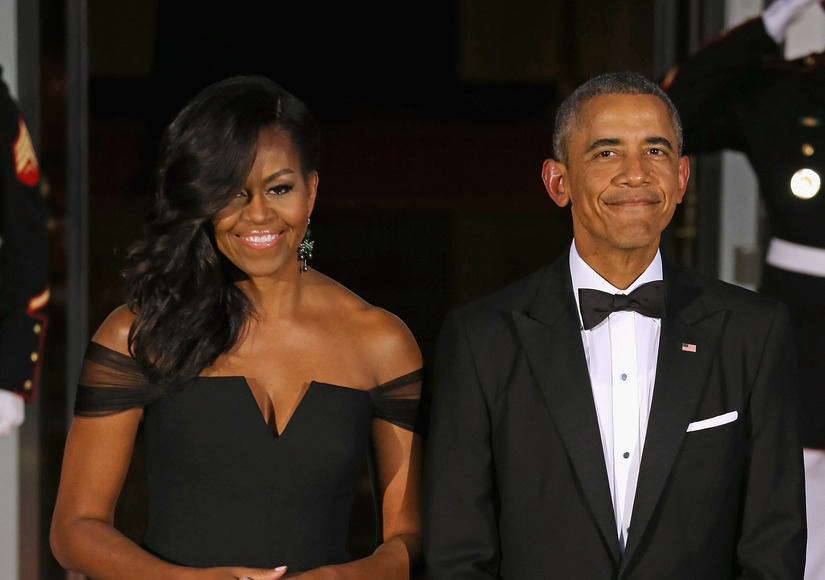 Less than a month ago, we were oohing and aweing how thoroughly FLOTUS Michelle Obama slayed in that dazzling gold Atelier Versace gown Donatella Versace herself designed for the last state dinner (this one in honor of Italy) she and hubby President Obama would host. More than a few of us may have had issues with former secretary of state Hillary Clinton but, even her staunchest detractors, in this moment when Michelle Obama commanded all the cameras, doubted she could lose to Celebrity Apprentice reality star Donald Trump who had not one stitch of governmental experience.

Yet Tuesday, November 8 the unthinkable truly did happen. After polls closed and the results started pouring in, the math looked off. Not only was Hillary Clinton not handedly beating Donald Trump, she was losing. And badly. In the wee hours of November 9, now dubbed “11/9,” even she had to concede that Donald Trump had indeed won the election on his way to becoming the 45th President of the United States.

A lot of Black America went into a panic. “I truly don’t know what to do. Everything is ruined,” tweeted Gabourey Sidibe of Empire and Precious fame. “Malcolm knew it then!!!! It’s truly #USorELSE #USorELSE #USorELSE,” T.I. observed. “Help” was all Kirk Franklin could muster. “I’m so afraid of what is about to happen,” India.Arie vulnerably admitted.

What happened to our beautiful eight years? They may not have been perfect and were sure not to be the same under a President Hillary Clinton, but they were still ours. We found comfort in seeing Black faces like Common, John Legend, Kendrick Lamar, LeBron James and more regularly rotate in and out of the White House. If all else failed, “My President is Black,” as Jeezy and Nas rhymed, always lifted us up. Whether he was brushing his shoulders off a la Jay-Z or FLOTUS was hitting us with that “And Still I Rise” Maya Angelou prophesy, we knew, even in the worst of times, like the police executions of Mike Brown, “I Can’t Breathe” Eric Garner or “he’s a registered gun owner” Philando Castile, that we had tangible hope of a better America that had never truly done right by us.

After eight years of Obama, the first Black President our nation had ever known, what does Donald Trump, who openly rode with Giuliani, the man who made “Stop and Frisk,” where countless Blacks and Latinos caught cases, real in New York City, during his campaign intend for us? What is we’se gonna do?

“It’s not the end of the world,” Rickey Smiley, the man behind popular morning radio’s The Rickey Smiley Show and TV One’s hit reality series, Rickey Smiley For Real, told Upscale. “It’s not like George W. Bush is back in office because those are real gangsters. George W. Bush, Dick Cheney, Condoleezza Rice, Donald Rumsfeld and Colin Powell should be in jail right now for war crimes. We had the worst economy. We were in two wars, one of them was an unjust war.”

“Everybody who voted for Donald Trump is not a racist,” Smiley, who swayed towards Hillary Clinton, says, and even sees parallels in Trump’s win to that of Obama’s first win. “Donald Trump came with the same swag that Barack Obama came with in 2008 and he came as an outsider,” he explains. “America rejected Hillary Clinton and they also rejected John McCain because they were part of the Washington establishment and they even rejected Jeb Bush in the primaries when he ran.”

For rapper/producer/actor David Banner, whose latest album is The God Box, Trump’s win may be a gift to Black America. “The excuse that America is post-racial and that racism doesn’t exist,” he told Upscale. “I think the mask has been ripped off of America’s face and it will force Black people to choose a side and I am very happy about that because I honestly think if Hillary Clinton had been elected, that mask would have stayed on and Black people would have had a false sense of hope.”

New York-based activist Tamika D. Mallory, a former national executive director of Rev. Al Sharpton’s National Action Network who has been on the front lines batting mass incarceration and the New York Police Department’s notorious “Stop and Frisk” policy, also sees Donald Trump’s election as a call to action of historic proportions. “In a lot of ways, we are now stepping up to our Bull Connor moment, if you will, where we are about to face people who have exhibited clear disdain and vile hatred for Black and Brown people in this country,” she explains to Upscale.

For her, “the potential of Rudy Giuliani taking a position as the highest cop in this country [as possible attorney general, the position once held by Eric Holder and now Loretta Lynch], knowing that he comes from being the top cop in New York City where he was one of the most divisive, racist and uncompromising leaders of the police department” doesn’t comfort her.

To deal with what is sure to come, Smiley says Black America has to be proactive. “Black people need to start investing in Black banks,” he says. David Banner echoes much of this and says “We have close to 1.2 trillion dollars that are spent yearly, why is a very small percentage only spent in the Black community and with Black people?”

Cooperative economics is not enough for either Banner, Mallory or Smiley, however. “We need to take politics more seriously and start voting during the midterm elections and local elections,” Smiley insists. “We have to put just as much focus and energy into those elections as we did for presidential elections.”

Mallory believes that if we knuckle down for 2018, we can “force our issues to the table” of a Trump White House. “I think the Republicans gave us a blueprint,” she says. “Even though they didn’t have the presidency, they controlled the House and the Senate and so, this way anytime any criminal justice reform package or any of the things that we needed to get done came up, they blocked it. So that same process is going to have to be a part of our organizing strategy as we move towards 2018 for the midterm elections. We are going to have to fight like hell to maintain the ones we have and to be able to gain more.”

To do that, Mallory says “we’ll have to unify like we’ve never unified before to fight back. This is not going to be a cakewalk.”

But Smiley is already encouraged. “The good news is a lot of judges were elected and a lot of people in urban areas like Atlanta and Louisville, Kentucky and Birmingham and Raleigh, North Carolina put a lot of Black people in powerful positions to make changes on the local level, which is absolutely great.”

All agree that leaning on each other is the only way Black America is going to make it through a Trump presidency. And take comfort in knowing that, while the dream has indeed been interrupted, it has not been completely destroyed. But also know that the time for action is now. “We’re going to have to show up and show out in 2018 and then in every other election thereafter,” Mallory says.

I truly don’t know what to do. Everything is ruined.

I’m so afraid of what is about to happen.

DATING SCENE: 10 Dating Apps Just in Time for the Holidays