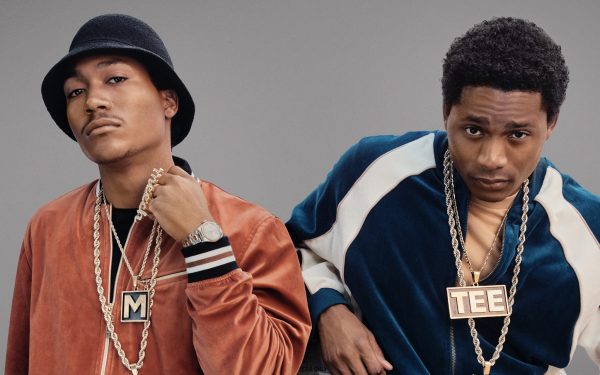 Stars Lil Meech and Da’Vinchi talk working with Tasha Smith and why BMF’s story is an important one to tell.

Undoubtedly, one of the most anticipated shows of 2021 is BMF (Black Mafia Family), the story of the notorious drug trafficking brothers Terry “Southwest T” Flenory and Demetrius “Big Meech” Flenory. Before they were sentenced to 30 years in prison in 2005, the brothers made more than $270 million. They employed over 100 people and had operations across the U.S., including in Los Angeles and Atlanta. And, they had affiliations with rappers like Fabolous, Jeezy and 50 Cent through their front company, Black Mafia Entertainment.

Created by 50 Cent (Curtis Jackson), who is making a run for the busiest man in television, BMF goes beyond the traditional money, drugs and power themes prevalent in many ’80s cocaine narratives. Instead, the show focuses on the conditions that influenced the brothers to make the decisions that would change their lives.

The series casts its gaze firmly on the place the brothers called home—the streets of Detroit. The show allows its audience to draw their own conclusions about the choices the brothers made in their quest for success, survival and manhood. Star Abraham D. Juste, better known as Da’Vinchi, plays Southwest T. He says the series offers an intimate glimpse into the lives of Meech and Southwest T—revealing a side that hasn’t been shown in the numerous documentaries about them.

“It’s a beautiful story about family, love and loyalty,” he explains. “It’s being told through them being kids. And it shows how they got into the game. Oftentimes when people see the ending of something, they fail to realize how it started. Someone said, ‘poverty is the mother of all crime.’ When you realize the circumstances, this is the reason why they ended up where they did.” Big Meech’s role is played by his real-life son, Lil Meech. “Portraying my father is a huge opportunity. So of course, there was a lot of pressure. But I was ready for the challenge,” Lil Meech says. “He definitely provided advice. And I really appreciate him for everything.”

Both Da’Vinchi and Lil Meech say they connected strongly to their roles. “It’s just like my life,” adds Da’Vinchi, who made his TV debut with a recurring role as Cash on Freeform’s hit series, Grown-ish. “My oldest brother gave me drugs to sell in school when I was in, like, fifth grade, probably like 11 or 12. So, it’s just a lot of weird similarities.

Thankfully, my father pulled me out, and I moved down to Florida with him. It changed my life.” He says that although he was still getting into a little bit of trouble in Florida, that came to an end pretty quickly. “I was deathly afraid of my father,” he laughs. “I was more afraid of him than the cops.”

He discovered his acting talent while enrolled in college. After a push from his professor, he began to take acting more seriously, eventually making his way back up to New York. Upon his return, he focused on making music while he also studied acting under his mentor.

He also worked at Jay-Z’s mother, Gloria Carter’s, restaurant, where he was eventually discovered. Not long afterward, he moved to L.A. and landed his role on Grown-ish. Now, Da’Vinchi is excited about his biggest role to date. He prepped for it by listening to ’80s gangster rap and speaking with Southwest T, who was released from prison in 2020 due to the pandemic and is now on house arrest.

“I watched a lot of documentaries on them. Honestly, I just tapped back into my childhood,” he says. “It wasn’t difficult because I come from that world. But I carry myself in such a way that people don’t know that I come from that. In this society, people judge a book by its cover. And if you look a certain way, people are like, ‘Oh my God, he’s so polished! He could never play that.’ I just know how to carry myself well. But I come from that sh-t. I come from poverty. I come from seeing crack needles on the floor.”

As for Lil Meech, he’s grateful for the opportunity to portray his father, who is still serving his sentence in an Oregon prison. “The whole experience has just been a dream come true,” he says. “How many people get the opportunity to portray their father on TV? We’ve had so much support with the show. And it’s such an intriguing story. So I think because of those two factors, it will be successful.”

Unsurprisingly, Da’Vinchi and Lil Meech formed a bond on set. “Working with Da’Vinchi was great. I mean, he is a really talented actor,” Lil Meech says. “Not only did we have great chemistry, but I feel like we were able to really help one another fully become our characters, instead of just playing the role.”

Da’Vinchi, who is heading to Broadway in late October, says they helped each other reach a higher level. “It was dope because oftentimes when you’re telling a true story, it’s seldom that you get to deal with the bloodline who was a part of it, so I was able to ask [Lil Meech] questions to really understand and learn from his uncle and his father,” Da’Vinchi says.

“It was very helpful. And considering this was his first-ever acting job. It was great for us to learn off each other. I was learning about his family, and I’m giving him tips on certain things, and it was a beautiful process of growing together. We formed a good brotherhood.” Actress Tasha Smith (For Better Or Worse, Empire, Power) directed several episodes, including the premier and the finale.

And according to Da’Vinchi, her passion set the precedent for the entire show. “Tasha Smith is an extremely passionate, interesting individual,” he says. “Oftentimes, talented individuals have these strange nuances that are hard to understand. But you see how effective it is at the end. Tasha was like one of those basketball coaches that at the beginning I was like, ‘What the f–k is going on?’ But then it’s just like, ‘oh wow.’ She saw it from a dope perspective. She’s super talented in her way of making the words on the page come to life. But you gotta have thick-ass skin to deal with Ms. Tasha.”

Da’Vinchi hopes that after people watch the series, which will air on Starz, they come away with a better grasp on who Meech and Southwest T really are. And what’s more, an understanding of how environment shapes decisions.

“I just hope [audiences] see these two people were human and that their circumstances caused them to take this route,” he says. “But at the same time, you always have choices. And whatever choice you make, you gotta be man enough to deal with the repercussions that could come with it. I also want them to see that family, loyalty and unity can really take you extremely far, no matter what you decide to do.”

Lil Meech agrees. “Even though the story is controversial, my father and BMF are a part of history,” he says. “If you take the vision and innovation he had and apply it to something more conventional, then everyone could relate. I think that’s the message here.”