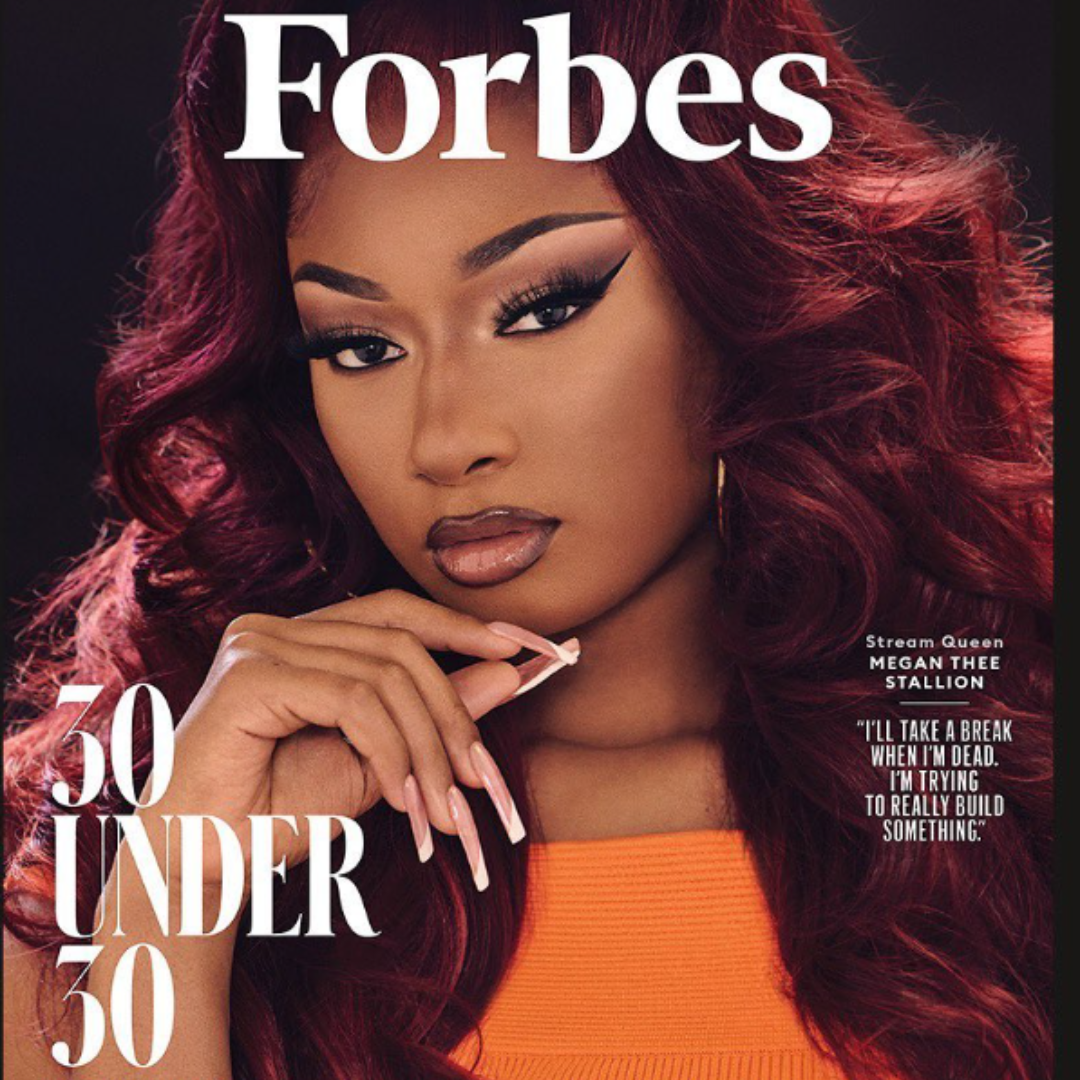 Grammy-winning recording artist Megan Thee Stallion is calling all the right plays when it comes to her career despite the obstacles, including a criminal trial against rapper Tory Lanez for a July 2020 shooting and a October 2022 home break-in. As proof of that, check out Thee Hot Girl Coach’s latest score.

“Forbes” magazine has chosen the Roc Nation artist as the cover girl for their ’30 Under 30′ issue. The esteemed publication recognizes the world’s most successful entrepreneurs under the age of 30 every year.

Megan Thee Stallion took the top spot with $13 million in earnings from ticket sales, merchandise, and endorsements. What makes this honor even more monumental for the 27-year-old? She is the first black woman to attain the coveted spot.

In response to the news, the entertainer (born Megan Pete) stated, “It’s really hard to be the first something in 2022 so aaaahhh!”

She added, “I want to be bigger than my music. I want people to know Megan as everything that she ever wanted to be.”

Aiming to become a multi-hyphenated entertainer in the industry, she’s on track. The “Savage” rapper has played multiple positions this year alone to gain an advantage.

After going platinum in 2020 with her debut album “Good News,” Megan released “Traumazine” this August. It reached number one on iTunes thanks to singles like “Her”, “Plan B”, and “Anxiety”.

Don’t get it twisted, however, the 300 Entertainment artist has not been stuck in a booth the whole time. Megan performed in places like Finland, Germany, and Japan for hotties around the globe. Moreover, she performed at the Wireless Festival in London and Coachella. This summer, she also made a special appearance on “Good Morning America.”

Megan dreams of becoming an actor and producer like Queen Latifah and Ice Cube. In light of this, she is racking up acting credits. She appeared on Disney+’s She Hulk and STARZ’s P-Valley. It seems Megan’s Hollywood journey is just beginning. In December 2021, she signed a first-look deal with Netflix to create and executive produce original programming.

The Texas Southern University alum leveraged her popularity and personality to book gigs on The Tonight Show with Jimmy Fallon and Saturday Night Live. Unfortunately, the latter did not come without a little drama. The day before she was set to set to appear on SNL, her L.A. home was burglarized. Among the items taken from inside the house were jewelry, cash, and electronics valued at $300-$400K, according to reports.

In spite of the incident, she took the reins as host and musical guest on SNL the next day. She became the second female rapper to serve in the dual role.

Earlier in the year, the former Legendary host landed her own Snapchat series, Off the Leash with Megan Thee Stallion. This eight-episode series featured Meg, her celebrity friends, and their fur babies at her Hot Girl ranch in Houston. Her guests included Taraji Henson, Normani, Nicole Ritchie, and Kelly Rowland.

Even though she enjoys securing the bag, she’s more than willing to share it. In honor of her late parents, Holly Thomas and Joseph Pete Jr., she founded the Pete and Thomas Foundation. Underserved communities will benefit from the organization’s housing, education, and health resources.

Later in the year, Megan created a mental health assistance platform called Bad B’s Have Bad Days Too. The website offers a directory of mental health professionals and hotlines. There are also specific listings for Black and LGBTQ+ communities. People who really want to hear “it’ll be okay” can find the support they need to “bounce back”.

Additionally, Megan advocates for body positivity and black women. For this reason, Texas Congresswoman Sheila Jackson Lee presented Megan with a Certificate of Congressional Recognition in September for her efforts.

Even though Megan has achieved plenty, she is determined to keep winning. She told Forbes, “I cannot slow down right now.” I’ll take a break when I’m dead. I’m trying to really build something. When I start sitting, I feel like I’m not doing enough or I’m giving somebody else the opportunity to pass me.”

In her ongoing legal battle, prosecutors have added a new charge against Lanez: felony for discharging a firearm with gross negligence.