Is It Time to Cancel Kanye West? 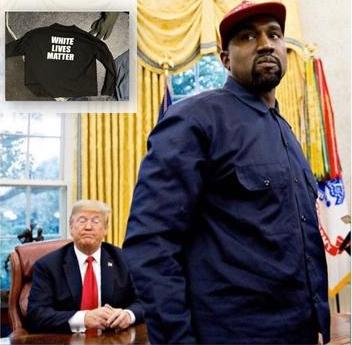 After Kanye West’s latest controversy promoting a White Lives Matters shirt he designed at his Paris Fashion Week show, some in the black community are saying it’s time to cancel West.

WE AS A PEOPLE ALL SHOULD CUT @kanyewest LOOSE!! Frfr and let him live his foolishly BestWhiteLife #BootLicker #WeDontWantYourKind #DisloyalAF ONCE YOU LEAVE BLACK AINT NO COMING BACK!! #YaHeard he cares nothing about his people!! Yes #Kanye your ancestors were slaves too. https://t.co/Fq2XDrnB9l

The shirt featured a photo of Pope John Paul II on the front with the words “Seguiremos tu ejemplo” (“We will follow your example”) and the phrase “White Lives Matters” prominently displayed on the back. West, or Ye, showed off the shirt along with right-wing commentator Candace Owens during the Oct. 3rd fashion show.

While many public figures have rebuffed West’s statement, including media pundits, Fox News and its conservative following is literally loving (liking on Twitter) every mention of support for “white lives.”

West has now doubled-down in defending of his controversial shirt. In a recent Twitter post, he wrote: “Here’s my latest response when people ask me why I made a tee that says white lives matter … THEY DO.”

The Anti-Defamation League calls the phrase a “hate slogan,” citing its use by white supremacist groups, including Ku Klux Klan groups, in response to the Black Lives Matter movement in 2015.

Jaden Smith admitted he “had to dip” out of West’s controversial Yeezy Season 9 show after seeing the shirts. Will Smith’s youngest son then posted a series of related tweets, stating that “Black Lives Matter” and “Follow Your Own Morals Instead Of People.”

“I Don’t Care Who’s It Is If I Don’t Feel The Message I’m Out,” he wrote. The 24-year-old aspiring rapper got further support from West’s ex-wife sister, model Kendall Jenner liked the posts.

During an interview with The Breakfast Club, media mogul Sean “Diddy” Combs described West as a “super free thinker” and said the rapper’s message is often “misconstrued.” He subsequently clarified his statements in a video post by vehemently rejecting the WLM shirt and any notion that this phrase is relevant.

“I am not about to be addressing every last thing that’s going on in the world on the internet but the thing I do have to address is this ‘White Lives Matter’ t-shirt,” Diddy said via his Instagram account on Wednesday. “I’ve always been there and I will always support my brother Kanye as a freethinker, but the ‘white lives matter’ t-shirt, I don’t rock with it. You know what I’m saying? I’m not with it.”

Meanwhile, some have said West, like Dave Chappelle, is “uncancelable” and publicly support him, including Tampa Bay Buccaneers wide receiver Antonio Brown. Others claim to see the hypocrisy in trying to cancel West while other public figures have committed much greater offenses without pushback or vice versa.

Only #Ye aka #Kanye. @RecordingAcad Claimed to cancel him and yet can’t do without him 🐐 #GrammyAwards2022 pic.twitter.com/JN3EVegG8h

Do you want to know what stupid looks like?

People want to cancel #kanye for having a different opinion, yet those same people will not cancel any artist/athlete that beat the shit out of his girlfriend/wife.

In an interview with Tucker Carlson of Fox News on Thursday, West explained that being threatened doesn’t scare him because allegedly he had already faced death threats from being a former President Donald Trump supporter. He said, “My so-called friends/handlers around me told me like said that if I like Trump, my career would be over. That my life would be over. They said stuff like people get killed for wearing a [MAGA] hat like that. They threatened my life.”

So, only time will tell if West will, indeed, face any kind of lasting public resistance, namely in he black community, because, as he said, all the things people have tried, “they don’t work.”