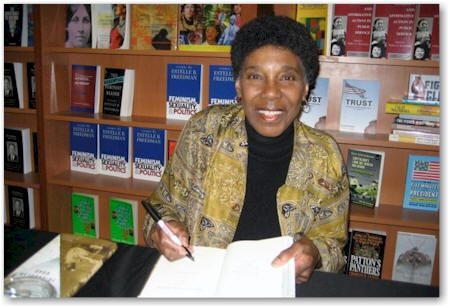 World-renowned Author Paule Marshall opened the literary doors for some of our favorite authors.

Decades before the Toni Morrisons’ and Terry McMillans’ of our generation, there was Brooklyn-born author and professor Paule Marshall.

The New York University Helen Gould Sheppard Chair of Literature and Culture has penned novels that has struck a unique chord with our community. Her natural gift for words, meshed with her passion for her Barbadian ancestry, has helped her to create a number of time-approved classics, from 1983’s Praisesong for the Widow to 2009’s memoir Triangular Road.

While the now-retired 86-year- old Marshall, who Langston Hughes once chose to tour with him, has five internationally known novels and two collections of short stories under her belt, she admits that when she first began to write, she did not seek success.

“It wasn’t a conscious act. It was feelings, really. I wanted to comment on the world where I grew up-on the people from South and West Indies who lived in Bedford-Stuyvesant Brooklyn,” says Marshall, whose Brown Girl, Brownstone (1959) later cemented her place as a forerunner in the world of African American Literature.

“I was always a reader; but when I become a realreader, there was a library in my community, which was always open, that opened such a world for me. One of the great impacts for me as a writer and reader was when I came upon an entire book of poetry by Paul Laurence Dunbar, and I saw that this peot was black like myself. That gave me the courage-and almost- permission-to try my hand at writiong.” explains Marshall. “His bravery, in a sense, to become a writier in the Deep South, at that time inspired me. The Macon Street branch was the beginning for me as a writer and began my story of who I have become today.”

ON YOUR WAY TO FINANCIAL FREEDOM: 'BE REALISTIC ABOUT YOUR BUDGET'