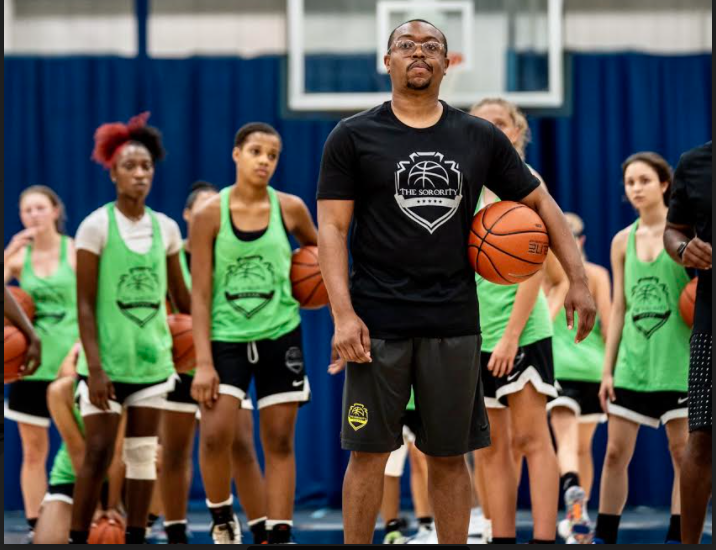 Gregory Jones II is the founder of G2 Hoops, LLC, the training ground for basketball players eyeing professional sports careers. His highly sought after Midwest-based basketball clinic, The Sorority Basketball Camp, has a roster of players who have won state championships and signed NCAA D1 scholarships.

“TSBC is one of the best camps in the world for girls who want to take their game to the next level,” he avers. “Every year I have college coaches that’ll contact me asking, ‘Who’s coming to camp?'”

One of his biggest girl athletes to date is  5 ft. 6 in. and 145 pound point guard, WNBA champ Dana Evans, who was named Associated Press First Team All-American. She hails from Jones’ hometown of Gary, Indiana.

G2 Hoops’ training is not limited to female athletes, males get their turn as well. Under Jones’ tutelage Ehab Amin, who finished the 2012 FIBA World Cup as one of the top five players, joined the “prestigious” Nike Global Challenge. Playing for Pan Africa, Amin was the first-ever North African and Egyptian in the international tournament.

In a prior interview a former athlete himself, Jones shares, “A conversation with my mother sparked my interest to work in sports. I want to help others navigate through the sports world. Most kids don’t have the right guidance and/or parents don’t know much about the business of sports.”

Here, Jones shares how he relies on his faith, talks working with Evans and coping with the loss of a young rising star.

Did you play professional basketball?

I did play professionally in Mexico. I decided I wanted to help others so I stopped playing.

What were your professional dreams before your injury?

I think my professional dreams were like every kid that grows up in a city like Gary, Indiana.

When did you discover your faith?

I grew up in church. I was baptized at an early age. I can remember being baptized and after church, my parents took my little brother and I to a fun center to play miniature golf and drive go carts.

How does your faith inform your decisions?

My faith has always been a part of me. I pray and ask God to guide and order my steps. Then, I do what I have to do. My confidence comes directly from my faith.

You train Dana Evans, the hot rookie for WNBA champions Chicago Sky. What was that experience like, i.e., how long did you train her? What was the regimen?

I’ve worked with Dana for a couple years. The first time we worked together in the gym she was in high school. Now, it’s transitioned into me being her manager/marketing rep. All her non-player contracts I work on with her. The experience with Dana and seeing her grow from a teenager to a young adult has been great.

When your client Karim Sameh Azab passed away, how did you channel your faith to deal with the sudden loss?

Karim passing away was surreal. We had no clue that he had Stage 4 Leukemia. I was there when the doctor told him the news. Seeing his face while the doctor was talking…that image is burnt into my mind forever. My faith allowed me to talk to Karim everyday and motivate him. I still have text messages in my phone that I look at when I think about him.

If there was one thing you could change about sports, what would it be?

Let kids be kids. I think parents have become overly invested and want it more than kids.

What are you currently reading?

The 1619 Project by Nikole Hannah-Jones

What books do you suggest to read?

To Kill a Mockingbird

The Catcher in the Rye