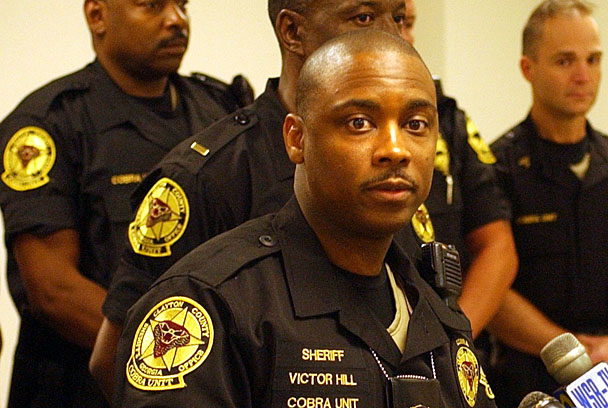 Ending days of speculation, Clayton County Sheriff Victor Hill was arrested Wednesday for his role in a shooting that critically wounded a woman inside a model home.

But Hill again kept mum, declining to talk to Gwinnett County police about what happened Sunday night inside a Lawrenceville-area model home. At 5 p.m. Wednesday, an arrest warrant was issued for Hill and his attorney was contacted, Cpl. Deon Washington said.

“Sheriff Victor Hill was afforded the opportunity to provide a statement about the incident but he declined to comment,” Washington said in an emailed statement late Wednesday.

Hill, 50, of Rex, surrendered and was charged with reckless conduct, a misdemeanor, and booked into the Gwinnett County jail at 7:48 p.m., booking records showed. At 8:38 p.m., Hill was released from jail after posting $2,950 bond and was seen leaving the jail in a black SUV.

The arrest comes three days after Hill allegedly shot Gwenevere McCord, 43, of Jonesboro, who was working Sunday night as a Paran Realty agent. Hill and McCord were the only two people inside the 3,800-square-foot home on Britt Trail Drive when when McCord was shot in the abdomen. Hill called 911 to report the shooting, but refused to cooperate with officers called to the home Sunday night.

After leaving behind his clothes and guns, Hill was allowed to leave the shooting scene. But Gwinnett District Attorney Danny Porter has said the incident remained under investigation, and that the sheriff’s statements in his 911 call contradicted evidence gathered at the scene. Porter declined to comment on Hill’s arrest Wednesday night.

“By consciously disregarding a substantial and unjustifiable risk, to wit: Practicing police tactics while in a model home open to the public with a loaded firearm, which would cause the harm of said person…” the warrant states.

McCord, who remains in critical condition at Gwinnett Medical Center, was unable to tell investigators what happened inside the home. But her father defended Hill, calling the shooting a “freak accident.”

For more information on this story visit ajc.com