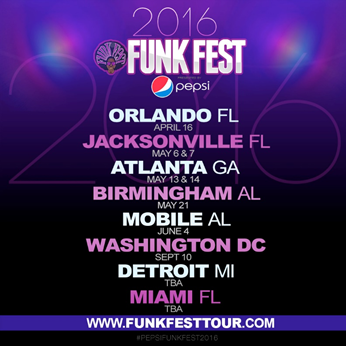 Funk Fest, in partnership with Pepsi, announces the official 2016 artist lineup for the highly anticipated music tour set to kick-off in Orlando on April 16.

For over 20 years, Funk Fest producer Variety Entertainment Productions (VEP) has curated concerts that feature some of the best Hip Hop, R&B, and Soul artists from the past three decades to create a unique music experience for fans in Southeastern cities.  The 2015 Tour visited nine cities, entertained over 100,000 people, donated $50,000 to scholarships and community causes and facilitated the reunions of popular performers like Floetry and Uncle Luke & the 2 Live Crew. The 2016 Tour will be just as exciting, and will include inaugural concerts in Detroit and Washington, DC, among many other new additions.

“Each year we aim to exceed consumer expectations, so we are excited about the artists we have slated for each market, and the fun additions partners like Pepsi and AT&T have planned to enhance the concert experience,” said Leo Bennett, CEO, Variety Entertainment Productions. “This is also our first year venturing to Washington, DC and Detroit, and the positive response from fans in our new cities and those we’ve visited before has started our 2016 tour season off on a high note.”

Community involvement is extremely important to Funk Fest, so Variety Entertainment launched its new Funk Fest Community Champions Program in 2015, which honors civic and community leaders for their commitment to enhancing their local areas. The program will continue in 2016 with the selection of recipients in each city, along with the presentation of $5,000 in scholarships to deserving students with support from Festival partners Pepsi and Charlotte-based non-profit Lifting As We Climb (LAWC).

“Education is one of our programmatic focuses, and our parntership  with Funk Fest and Pepsi allowed us to positively impact the lives of promising students,” said Stacey Stone Bennett, Executive Director of Lifting As We Climb. “We want to continue to be part of the success recipe for young people who are community-minded and driven, and look forward to selecting the 2016 scholarship recipients in conjunction with our valued partners.”