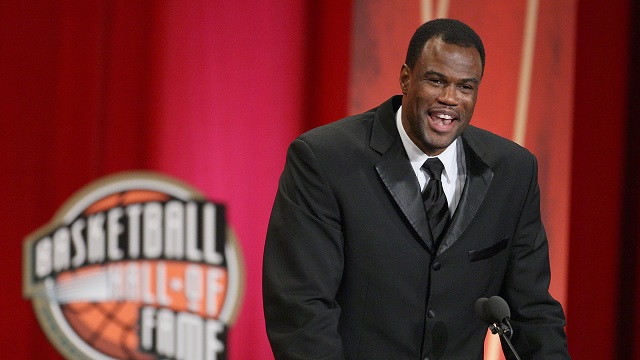 Not only is NBA Hall of Famer David Robinson an officer and a gentleman, but he is also a 7’1″ giant of philanthropy.

He is one of those awesome people that hardly anyone talks about. Everyone knows Michael Jordan, Kobe Bryant, Magic Johnson and Dr.J., but who is mentioning a humble guy who was the 1987 NBA draft first overall pick, played 14 seasons in the NBA for the Spurs, scored 71 points in a single game, was League MVP, Rookie of the Year and 10-time All Star? He also won two NBA championships, was 1994 season scoring leader, was inducted into the NBA Hall of Fame along with Michael Jordan and John Stockton, and received a score of 1320 on his SAT. However, all those accomplishments pale in comparison to what Robinson has done with his passion for charity.

Robinson, born August 6, 1965 in Key West, Florida, followed his father’s path by enrolling at the U.S. Naval Academy. He went on to have a stellar basketball career after being a late boomer. He says that his heart is in teaching and serving. “I’m a community-minded guy. All of my business is born out of my desire to change communities.” So in 1991, he visited a group of fifth graders in Texas and challenged the 94 students to finish high school. He promised that he would give each of them a $2,000 scholarship if they finished. In 1998, when 50 of them graduated, he rewarded each of them with an $8,000 scholarship. Robinson has donated millions to educate the disadvantaged. He also contributes to feeding the hungry. His giving has become so recognized that the NBA has named its outstanding community service award the ‘David Robinson Plaque’. He currently serves as a board member of the United States Naval Academy Foundation and Centerplate, one of the nation’s leading food service providers. He is co-founder of the Admiral Center, started in 2008 as an initiative for helping channel the resources of celebrities to create sustainable social change. His Admiral Capital Group manages more than $250 million in real estate assests, 10% of whose profits he uses to help the common good.

He is a hero and role model on and off the court. Sports seem to have been just a platform for Robinson’s own personal ministry. He deserves a national salute.

WHEN TO BUY ORGANIC PRODUCE VS. CONVENTIONAL