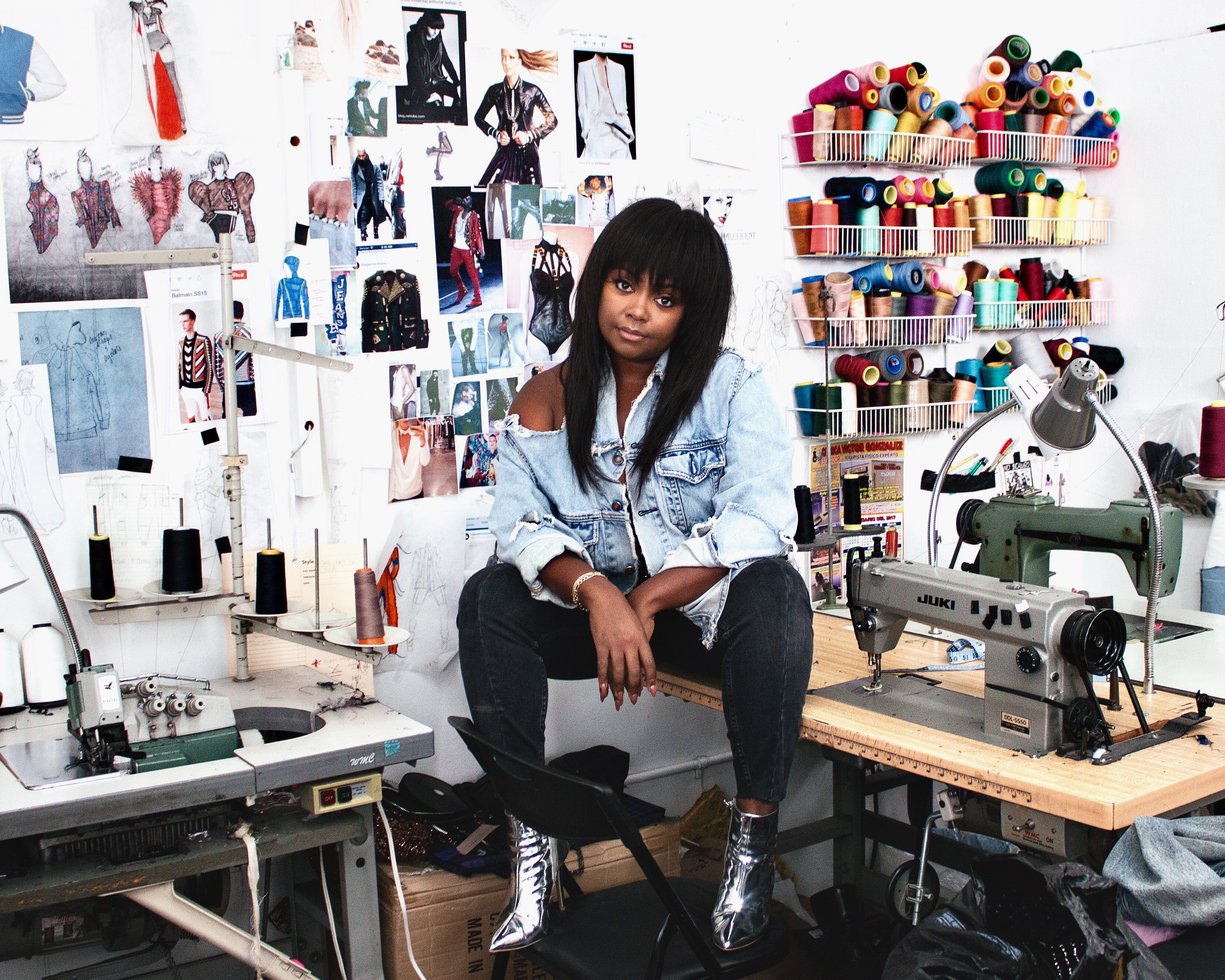 “Another big moment where I pulled inspiration from was during the time I got the call from Beyonce. A bubble jacket was needed for the finale of the “FORMATION” tour.”

Being Confident and Comfortable is the MOTTO…you only live once YOLO! Teaming up Tampax and Always Radiant Collection, Radiant Dance Off Competition, celebrity designer, Brea Stinson broke it down to Upscale Magazine on what it means to be confident and comfortable. From start to finish of this interview process, Brea has been a inspirational. Every story she spoke, sketched a picture in my head what it is like to be celebrity designer. Just because she is an upscale designer does not mean she does not relate to the everyday woman. Read on to get every stitch of this interview… Everyone has a humble beginning, where did your love of designing start?

It came organically. My Mother was the type to have InStyle and Vogue in my household from as far as I can remember. She would tear out the pages and literally locate the pieces that she wanted to buy from these editorials. My Father had worked in retail; he was the type to lay his clothes out the night before. Fashion was a big part of my household growing up as you can see.

My parents gave me the freedom to create. Not only did I remix my clothes, I made clothes for my Barbies
too. In grade school I had a side hustle.

I charged people five to twenty dollars to draw cartoon sketches, adding rhinestone & cool sayings on the pants legs during… Another Bad Creation… Bell Biv DeVoe era. Being an assistant started my humble professional career. I would have to do alterations and seamstress work on set when I first got into styling. That was humbling. You get into in the business and learn all the different factors of it. You learn every step of the way. Those humble beginnings taught me a lot.

As a Clark Atlanta University Alumna, has graduating from an HBCU (Historically Black Colleges University) help jump start your career?

I would not have worked in Fashion if I had not attended an HBCU, Clark Atlanta specifically. Being a Business Major, I had taken fashion classes at my elective courses. It was a rigorous merchandising course.

One of the assignments was to create my own business. During that time, I was already designing for my friends and classmates. It was the encouragement to do this assignment that made designing happen for me.

Graphically promoting it was my first choice. I started off with Logo T-Shirts with “ B Star” on it. DJ Drama was one of my classmates, we worked the project together. We would go on the promenade every Market Thursday, I would sell my t-shirts while he sold his mixtapes. We ended up getting an A on the project. DJ Drama and I were able to show that we had a market for our product we were trying to sell.

I was able to network with people after we had graduated. We were becoming influencers in our selected industries. At HBCUs characters are build and relationships formed with these people because you all connect with struggles on a daily basis. Just the network alone of attending an HBCU, you cannot put a price on it. 4 out 5 African American Women, say they avoid wearing certain clothing during their period? Can you attest to that?

When I read that statistics, I was alarmed by it. I did not realized that a large amount of women felt like that. Eighty percent is a fairly large number of women saying that do not wear their favorite things during that time of the month. They feel uncomfortable and fear leakage.

“To wear the white pants or no to wear the white pants” I definitely had those thoughts. What I will say is that Tampax was the brand introduced to me in my house. As a dancer in high school I had those “Ooo, how is this going to work out” moments. Fortunately with this brand, I never had to worry. I always felt secure.

This campaign is about “Wear what you want.” Give your best performance rather you are out on the field or just going to your job; you can be your best self and feel confident. Why was it important to you to partner with Tampax and Always Radiant Collection, #RadiantDanceOff Competition?

As I previously mentioned, this was a brand that I grew up with as young girl. My mom and aunt introduced it to me. It has been a staple product that has never let me down.

As a wardrobe stylist now fashion designer, I now know the importance to give someone something that allows them to be at ease in. Comfort equates to confidence, when you

have confidence you can tackle any task at hand. With Tampax starting this Radiant Campaign, encouraging women to be best woman that she can be while being comfortable is what I believe in.

Is there a challenge to choose between creativity and functionality of a costume or is there common ground?

The most difficult part in designing a costume is never the creativity. I always has wealth of creative ideas. The challenge as a designer is to keep my integrity and execute those great ideas. At times the functionality can be challenging.

When you get into the function of a garment, take in consideration what your client is doing. The design has to compliment your customers personality as well as be sensible to what he or she will be doing. I have been designing for a handful of years now.

I understand what my clients and which fabrics to use when creating the look. This has really made the design process much smoother. Who was your first celebrity client? Tell readers the story behind it.

Back in College, A hairstylist friend of mine invited me to create looks for extras on the Lil Jon and Eastside Boyz video set. It was funny, because I had put my blood sweat tears in making those sexy spandex pieces. It was not an ideal first time experience; I was in the realm of celebrities even though I did not actually get to dress them with the champagne and smoke getting on my garments. However, I was super excited getting paid $250.

The time I had drafted the concept for JAY-Z jacket in the “Fade to Black” film that documented his last show for his retirement. This story stands out to me the most because the jacket was to be his last look for his retirement performance.

I had came up with jacket with vintage tattoo art with the slogan “ Death before DisHonor” Why? The statement was reoccurring throughout his record. Illustrating that saying was a edgy twist on typical blazer plus I knew it would be significant to him.

Once I had given the custom to Jay-Z, he loved and wore it. At that very moment I knew I had a pulse on something great, he chose to wear my custom jacket during a pivotal of his career. I started paying attention more to the little creative voice in the back my head, soon after I saw many brands follow suit with similar pieces to my concept. I knew I was onto something bigger.

Where do you pull inspiration from for each client? Give us an example.

I pull my inspiration for everywhere, not from exactly from area. Reiterating one of my statements, you want to get to know your client’s personal style. Once you have that, it is all about elevating that personal style.

Even with the Tampax, Radiant Dance Off Competition, I viewed old footages of the dancers and the history of the costumes. I was marking how the ensembles evolved. Having a designer background in the entertainment industry, I want to give those outfits a little modern twist with edginess and flashiness; yet paying homage to the original looks. With all tumbles and jumps that these young ladies will be doing, I wanted these pieces to be long lasting and memorable. Being part of this dance competition, I want to these girls to look and feel the meaning of this campaign…RADIANT!

Comfortable and Confident is what you want your client to feel. Having the perception that he or she can conquer the world while being comfortable. Another big moment where I pulled inspiration from was during the time I got the call from Beyonce. A bubble jacket was needed for the finale of the “FORMATION” tour. Beyonce’s instructions were “ I kinda want a bubble jacket, looking like a parachute. Just make it either yellow or gold. We’re changing the entire look of the show to gold.”

They literally changed the entire finale show to gold or yellow fit the BeyHive theme. I honestly had one day to make this jacket happen!

I watched old footage of Norma Kamali parachute collection, along with Moncler and Tommy Hilfiger winter bubble jackets that they had done. Making two sketches from both inspirations, keeping Beyonce’s over-the-top stage presence in mind. I had to make sure my fabric choices were spot on.

Utilizing a metallic gold crepe spandex material with a touch black going through it and the texture of quilted fabrics, adding parachute pulling strings; not forgetting to make some cut-outs to show a little skin.

The garment had dimension and was kissing the lights on stage.

I was able to remain true to my design aesthetics that complimented Beyonce’s stage presence.