IT’S A SUNNY SUMMER DAY IN SOUTHERN CALIFORNIA, AND BRANDY NORWOOD IS GLOWING.

She laughs and smiles easily. The sun glints off her smooth, cocoa-colored skin when she tilts her head. The carefree beauty she radiates on days like these goes deeper than her sunny exterior. It’s soul-deep, stemming from the peaceful space she currently occupies. At 42 years old, Brandy is more comfortable with herself than she’s ever been. And it shows. 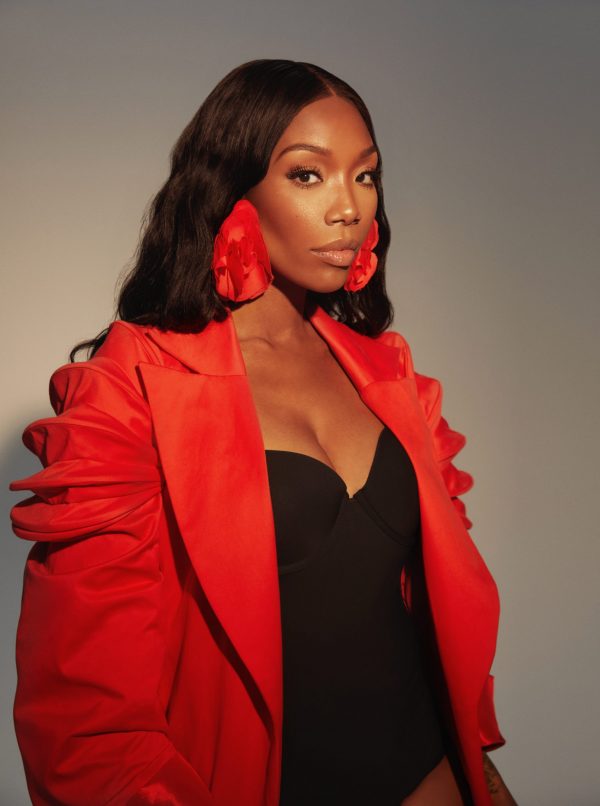 Arriving here wasn’t easy. Brandy has earned her happiness, step by step, as she eventually learned to embrace all the things that were necessary to keep herself healthy—both mentally and physically. As she does every morning, she started her day by journaling. “I definitely had to grow into that spiritual connection and being consistent with it.”

She admits with a small laugh, “I started to journal at a very young age, but it wasn’t consistent. I wanted to do something else other than journal even though that was the most positive thing for me to do.” She chuckles again. “Now, I do it every day. It’s a practice.” In addition to journaling, she begins each day with tea and meditation.“I’m into affirmations,” she adds. “Affirmations help me mentally.” Her self-care routine has become even more important because she’s as busy as ever.

Brandy has made notable appearances on songs including, the gospel-R&B-tinged “Optimistic” from Common, Karriem Riggins and Robert Glasper’s super group, August Greene, as well as on Anderson.Paak’s groovy single “Jet Black” from his acclaimed 2019 album, Ventura. Brandy began prepping for her own release. In summer 2020, she dropped her first album in eight years, B7.  She wrote the entire project and released it on her own label, Brand Nu, Inc, in partnership with eOne.

Next, there was an outpouring of love when her beloved sitcom, Moesha, came to Netflix in August 2020. An appreciation followed when her landmark Disney film, Cinderella, finally arrived on Disney Plus in early 2021. She recorded a new song called “Starting Now” to accompany the film. The Disney Channel’s music special, Disney Princess Remixed – An Ultimate Princess Celebration will feature the song. It also premieres this August. And, she’s starring in a much-anticipated new series on ABC, Queens, later this year.

To say she’s busy would be an understatement. But she’s happy with the work because she has autonomy over her decisions, career and otherwise. So, what does success look like for Brandy these days? “That’s a loaded question,” she laughs. “Success for me is when I can validate myself and validate my own work. And I can be proud of myself and proud of what my work represents and the message I’m trying to portray. Success is when I’ve left nothing out. I’ve given it everything that I have.”

Brandy’s work ethic has never been up for debate. She’s been in the business for decades. She does everything. Even with the bumps and twists she’s experienced, Brandy occupies a unique space. She sets trends and precedents for others to follow. She does this while remaining grounded and relatable to audiences across generations. Put simply, there just aren’t many people who’ve been able to accomplish what she has over the years. There isn’t anyone like her. She arrived on the music scene as a fresh-faced 15-year-old in 1994. She came on the Hollywood scene wearing signature box braids, a cheerful personality and self-titled debut album. It garnered two Grammy nominations. One for Best New Artist and the other for her second single, “Baby.”

Eventually, she had co-signs from musical powerhouses like Whitney Houston and Babyface after her impressive showing on 1995’s smash hit soundtrack, Waiting to Exhale (“Sitting Up In My Room”). Brandy immediately established herself as a star. She broke the mold of what pop stars looked like—brown-skinned with braids.

But it was her voice that instantly set her apart from her peers. Raspy and melodic, soft with airy depth, Brandy’s voice has been her calling card for years. While people recognized her talent on her debut album, it was her three-album run between 1998 and 2004 that established her vocally—Never Say Never (1998), Full Moon (2002) and Afrodisiac (2004). When you ask nearly any contemporary R&B singer where they learned harmony and melody—from Rihanna to Melanie Fiona to Frank Ocean (she was one of the first artists to work with him early in his career) to H.E.R. and Ariana Grande—Brandy’s name will come up. She’s a legend in that respect, and the harmonies and vocal stacks on Full Moon, in particular, have been studied and dissected by R&B, soul and pop singers alike.

“Brandy is definitely the top influence to all female artists,” R&B star Jazmine Sullivan proclaimed in a 2014 interview. “She just can sang.”

Brandy smiles, her eyes widening slightly when the scope of her influence is mentioned. She’s heard it before, but she’s still humbled when her “vocal bible” status is mentioned. She says, with a small shake of her head, “I never would’ve thought that I’d be considered the ‘vocal bible.’ I just knew at the time I wanted to be something different. I wanted to find my sound. I felt like I was in a place with this amazing group of people—Rodney Jerkins, LaShawn Daniels—where I felt like I could find this new sound, this new wave of how I wanted to express myself.”

This cover story is condensed and edited for this format. To read Brandy Norwood’s full original story CLICK HERE to purchase the new DIGITAL issue for a SPECIAL PRICE OF $1.99