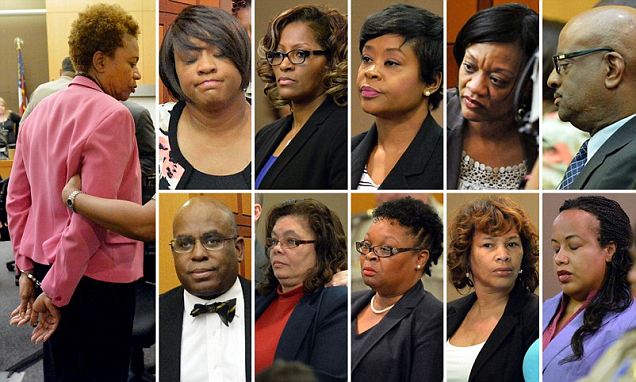 An Atlanta jury last week convicted 11 teachers of racketeering in a standardized test-cheating scandal. Yes, prosecutors used a law previously employed against mobsters against the educators, who were part of a group of 35 indicted in 2013 in the scheme. That included the now-deceased Atlanta schools superintendent, Beverly Hall. You can read here about how and why the cheating scheme occurred in Atlanta. The following post looks at something broader: how the scandal fits into a story about the consequences of bad policy-making. When people cheat to escape a corrupt accountability system, who is to blame?

This was written by scholar Richard Rothstein, a research associate at theEconomic Policy Institute, a non-profit created in 1986 to broaden the discussion about economic policy to include the interests of low- and middle-income workers. He is also senior fellow of the Chief Justice Earl Warren Institute on Law and Social Policy at the University of California (Berkeley) School of Law, and he is the author of books including  “Grading Education: Getting Accountability Right,  and “Class and Schools: Using Social, Economic and Educational Reform to Close the Black-White Achievement Gap.” He was a national education writer for The New York Times as well. This appeared on the EPI website and I am republishing it with permission.

Eleven Atlanta educators, convicted and imprisoned, have taken the fall for systematic cheating on standardized tests in American education. Such cheating is widespread, as is similar corruption in any institution—whether health care, criminal justice, the Veterans Administration, or others—where top policymakers try to manage their institutions with simple quantitative measures that distort the institution’s goals. This corruption is especially inevitable when out-of-touch policymakers set impossible-to-achieve goals and expect that success will nonetheless follow if only underlings are held accountable for measurable results.

There was little doubt, even before the jury’s decision, that Atlanta teachers and administrators had changed answers on student test booklets to increase scores. There was also little doubt that Atlanta’s late superintendent, Beverly Hall, was partly responsible because she had, as a state investigation revealed, “created a culture of fear, intimidation and retaliation” that had permitted “cheating—at all levels—to go unchecked for years.”

What the trial did not explore was whether Dr. Hall herself was reacting to a culture of fear, intimidation, and retaliation that her board, state education officials, and the Bush and Obama administrations had created. Just as her principals’ jobs were in jeopardy if test scores didn’t rise, her tenure, too, was dependent on ever rising test scores.

Holding educators accountable for student test results makes sense if the tests are reasonable reflections of teacher performance. But if they are not, and if educators are being held accountable for meeting standards that are impossible to achieve, then the only way to meet fanciful goals imposed from above—according to federal law, that all children will make adequate yearly progress towards full proficiency in 2014—is to cheat, using illegal or barely legal devices. It is not surprising that educators do just that.

And demanding that all students be proficient, by any date, was an impossible and incoherent demand. No Child Left Behind required that states make their proficiency standards “challenging.” But no goal can simultaneously be challenging to and achievable by all students across the entire achievement distribution. A standard can either be a minimal standard, which presents no challenge to typical and advanced students, or it can be a challenging standard, which is unachievable by most below-average students. Some states ignored the “challenging” requirement and lowered their standards so most students could pass a meaningless test. Others succumbed to hectoring by Secretary of Education Arne Duncan and his colleagues in the Bush and Obama administrations to raise their standards, essentially guaranteeing the cheating scandals that followed. Now, with tests coming online that are aligned with the tougher “Common Core” standards, along with new demands that educators jobs are at risk if all students don’t achieve proficiency, we can be sure that Atlanta’s cheating scandal will not be the last.

Certainly, educators can refuse to cheat, and take the fall for unavoidable failure in other ways: they can see their schools closed, their colleagues fired, their students’ confidence and love of learning destroyed. That would have been the legal thing to do, but not necessarily the ethical thing to do. As one indicted teacher told the judge before the trial, “I truly believed that I was helping these children stay in school just one more year,” something from which they would have benefited far more than being drilled incessantly on test-taking strategies so they could pass tests legally.

Attempting to protect children from curricular corruption by changing test answers may have been an option chosen by many teachers in Atlanta. A curious aspect of the Atlanta scandal is that while cheating on Georgia’s standardized tests was widespread, Atlanta’s performance on a federal sampled test, for which there are no sanctions for alleged failure and on which cheating is extremely difficult, improved at least as rapidly, and in several comparisons more rapidly and more consistently, than performance in other large urban districts for which data are available—with the possible exception of Los Angeles, where impressive gains were similar to those in Atlanta. The gains characterized not only the Atlanta district as a whole, but its most disadvantaged (African American and low-income) students. Could this be because many Atlanta teachers foreswore test-specific instructional distortion and concentrated on delivering quality instruction, while protecting themselves from sanctions by cheating? We can’t know, but it is a possibility.

Our use of tests as the chief way to measure school and teacher performance has corrupted schools everywhere. Because schools have been held accountable only for math and reading test scores, classroom time has diminished for other critically important subjects like social studies and civics, science, physical education, and character development. In many places, drills and test preparation have displaced instruction. Elsewhere, teachers and administrators have studied prior tests to make educated guesses about the specific question types that are likely to appear on the next test; teachers can then practice these question types with their students, while ignoring other types that are just as important in the curriculum.

Some districts tend to suspend low-scoring students for alleged disciplinary infractions just before testing day. In many places, principals convene meetings of teachers early in the school year to review prior year test results in order to identify students whose past performance has been just below the passing point; then, teachers can concentrate instruction on these students while devoting less attention to students who are already above the passing point or who are too far below it to be able to improve the passing rate. This strategy is known as “data-driven instruction” and is highly praised by education policymakers. Because it causes less harm to students, the cheating done by Atlanta teachers may be more ethical than the more commonplace forms of corruption.

Test-cheating scandals are widespread. Cheating in Baltimore, Houston, Philadelphia, and elsewhere did not result in high-profile trials, but has been well-documented. In Washington, DC, former Chancellor Michelle Rhee got great credit for improving student performance. She gave large bonuses to principals whose test score improvements were substantial—and implausible. An investigation found a statistically improbable rate of “wrong-to-right” erasures and corrections on district tests. Rhee, too, created a culture of fear, intimidation and retaliation.

What is most puzzling is that top policymakers, from the president and secretary of education on down, continue to believe that schools can be improved by holding educators accountable for achieving quantifiable progress towards overly simplified and sometimes absurd goals. In 1994, Congress passed a law saying that the United States would be “first in the world in math and science by 2000.” When passing a law proved inadequate, Congress adopted No Child Left Behind, with its demand that all students be proficient by 2014. When it became apparent that testing and punishment for low scores could not accomplish this, the Obama administration attempted to substitute an even more unrealistic goal—getting all students “college and career ready” by 2020. The federal government doesn’t have a monopoly on such foolishness. Governor Rick Scott of Florida has just promised that his state will have the highest graduation rate in the nation by the end of his current term. It becomes not only foolish, but dangerous, when policymakers take such goals seriously, hold educators accountable for meeting them, and then label those who do not as failures.

For years, the overwhelming evidence from other fields has been that accountability by simple quantitative measures does more harm than good, and too often results in corruption or illegal cheating. And it continues to accumulate.

Obamacare is implementing pay systems for doctors and hospitals that reward them for the health of their patients, for example, by increasing payments to hospitals whose patients, within a month of being discharged, have a low rate of follow-up hospitalization. In practice, however, the reward system simply penalizes a hospital for taking low-income patients because, as a report commissioned by the administration itself concluded, “readmissions are difficult to avoid in patients who can’t afford post-discharge medications, have no social support to help with recovery at home, have no way to get to follow-up doctor appointments or are homeless.”

Medicare has adopted a rating system for nursing homes, designed to reward good homes and punish bad ones by directing patients to those of the highest (“five star”) quality. The system includes indicators like staffing levels and quality—how many patients develop bedsores, for example. Both legal corruption and fraudulent cheating has resulted. Nursing homes add staff before scheduled inspections, and reduce staff once the inspectors leave. That’s legal. They also self-report inaccurate quality information. That’s fraudulent. There have been no show trials, however, of nursing home staff, and no nurses have been led off before the cameras in handcuffs because they purposely failed to report bedsores.

On Tuesday, Chicago voters will decide whether to re-elect Mayor Rahm Emanuel, who has boasted about the miraculous drop in crime during his first term. The drop in crime statistics, however, was achieved at least in part by police administrators who classified more serious crimes as lesser crimes, or as no crimes at all. There have been no show trials either of Chicago police administrators who cheated on their crime reports.

The most widely reported recent instance of this corruption was the Veterans Administration’s requirement that its staff schedule appointments within 14 days of a veteran’s request for one. That it was impossible to meet this standard because there were insufficient doctors to see patients within that time frame did not influence the VA to change its standard. So, systematically, nationwide, intake staff cheated, for example by reporting that patients had only called for an appointment 14 days before they received one, not the months that may have transpired. Many staff members also lied to federal investigators looking into the cheating; lying to investigators is a crime for which Atlanta educators were convicted, VA employees have not been similarly prosecuted. Instead of being put on trial, supervisors who permitted such practices have been allowed to resign.

There is another respect in which the VA scandal differed from the one in the Atlanta school district. VA supervisors permitted to resign did not take the fall for those ultimately responsible for enforcing the corruption-inducing standard. Last May, Secretary of Veterans Affairs Eric Shinseki, who had ordered that appointments be scheduled within 14 days, himself resigned because of the scandal. I offer no opinion about whether similar accountability would be appropriate in the Department of Education.