In case you didn’t know, the film Chocolate City, directed by Jean-Claude La Marre and starring Robert Ri’chard, Vivica A. Fox, Tyson Beckford, Michael Jai White, Darrin Dewitt Henson, Tyson Beckford, DeRay Davis, Ginuwine and more, is finally out. Although it is playing in select theaters in ten cities and metro areas, which are listed below, it’s also available in the comfort of your own home via Video on Demand. 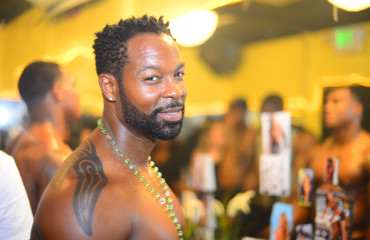 Darrin Dewitt Henson, perhaps still best known as Lem, Bird’s husband, from Soul Food, says that working on this film about struggling college student Michael, played by Robert Ri’Chard, who finds a unique way to make ends meet, was a positive experience. “We were just like a group of brothers together having fun on a project. It was great,” says Henson who plays aging Afrocentric exotic dancer Magnus in the film. “While we were on set, it was this healthy camaraderie.”

To promote the film, Tyson Beckford, who is known as Adrian “Rude Boy”, the club’s top dancer  in the film until Ri’Chard’s Michael comes along to steal his thunder, recently imitated art as a featured performer for Chippendales in Las Vegas. “They wanted me to do the Chippendales thing a little earlier in the year,” admits the pioneering male supermodel who has an extremely diverse female fan base, “but I held out to the point that it was going to be good for us when we released Chocolate City.”

For Henson, who started out as a dancer and did choreography for Chocolate City, playing an exotic dancer wasn’t as easy as one would assume. “I had never done anything like that before so it was a little nerve-wracking for me to just go out and just be close to naked on the stage,” admits Henson. “It was scary but then it turned empowering when the music comes on and the women that were in the audience, you know everybody screaming and waving their dollars; it turned from fear to empowerment. It was a really interesting transition for me.” 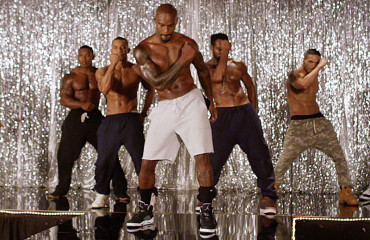 But, interestingly, Ri’Chard, who is perhaps best known as Arnez, boyfriend to Kyla Pratt’s Breanna on the sitcom One on One and, more recently, Derek on Meet the Browns, didn’t feel that kind of pressure despite playing the Michael a.k.a. “Sexy Chocolate” lead. “For my character, he’s an amateur so I got to walk the amateur route,” explains Ri’Chard. “For me, it was probably a little easier because I didn’t have to be on because my character was going through what I was going through at the same time.”

The men, especially Henson, do agree that the film, despite descriptions as “the Black Magic Mike” is exposing something we have rarely seen on film. “I think this is the first time that we get to see a not so sugar-coated perspective on what the dance life is like  . . . and we get to see it with African American males,” expounds Henson.

“Magic Mike is a completely different film and Chocolate City literally stands on its own,” continues Henson. “It’s a film about the subculture of dancing and the coming of age about this one guy who takes a chance and wins.”

Ri’Chard, however, keeps what’s most important in the forefront. “I think every woman loves men, chocolate and coffee, and we got all of it,” he promises. “I think people are going to entertained.”

KENYA MOORE ON HER ROCKY RELATIONSHIPS: 'I NEVER CHOOSE THE GUY WHO WANTS ME'