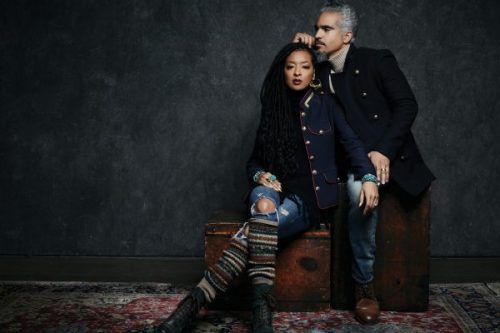 “People are so over the negative imagery put out there about black people,” says Jennia, an actress who’s had recurring roles on NBC, CW, ABC, BET and Centric. “I’m sick of it, and my mission has always been to do projects that highlight us. If it brings us down, I’m not interested. I’ll turn stuff down, because if it’s not about elevating us, I don’t even want it.”

And that’s the primary mission of their series, which airs on Revolt TV. Previously, The Anatomy of…series highlights black mothers, black fathers and most recently, black love. Now, Sol and Jennia turn their eyes to another major cornerstone of culture: black art.

In the series, they examine the work of brilliant local black artists, taking viewers through their journey from the creative process to selling their work and ultimately their impact on the overall culture.

But it isn’t only the artists and their work that’s explored. Sol, a 17-year industry vet and two-time Emmy Award-nominee, says the aim is to shine a light on the culture of collecting art as well.

“It’s a topic that we’ve been interested in and have been researching and exploring,” he explains. “We’ve been talking to gallery artists and owners and finding that our people are missing opportunities as collectors and investors. The value of our art is highly coveted, globally. The value is increasing while we’re living. We’ve found artists who were worth $3,000 to $4,000 five years ago, and now their work is going for $75,000.”

In the process of their research, however, they uncover some ugly truths. “I was talking to one artist who said we’re getting redlined. A gallery owner will tell the customer that a piece is already spoken for so that they can sell it to their friends or people who they know instead. We found out that it’s almost like real estate.”

Those kinds of discoveries are what make the six-part Anatomy series such a rich and valuable resource in the documentation of black culture. The couple stresses the importance of black people controlling their own narratives. “If we don’t control the narrative, we don’t control the impression that’s left on the culture,” Sol says.

“In school, we’re taught our history from our oppressor. It’s imperative that we tell stories that reflect who we really are. We’re loving people who love to laugh, have a good time, we love education, we love furthering ourselves, so it’s important for us to see those images to give us something to aspire to.”

And, both Jennia and Sol are uniquely qualified in that realm. They’re not only partners in life and business but are truly, as Jennia says, “best friends.”

“We almost share a brain,” Jennia laughs, explaining why working side by side with Sol is so great. “I’m very right brain, and he’s very left brain. I’m ideas all day long and he’s like, ‘Okay, that works, or that’s too expensive, or hell no to that.’ To be honest, there’s an art to being on the business side, and he’s an amazing producer.”

So, even when the lights are turned out and they’re climbing into bed, it’s not uncommon for them to toss ideas around.

Sol agrees, though his assessment of why they work together so well is a bit simpler (and sweeter): “I get to look at her all day.”

Following the segment on black art, the couple is focusing on another important aspect of black culture and life: fashion. The Anatomy of Fashion is set to arrive sometime later this year. In the end, as Sol says, the goal is to preserve and uplift the culture.

“That is our purpose,” Sol says, “to uplift the culture, to elevate us as a culture and to show the truth of how multifaceted we are as a people.” –Jacinta Howard