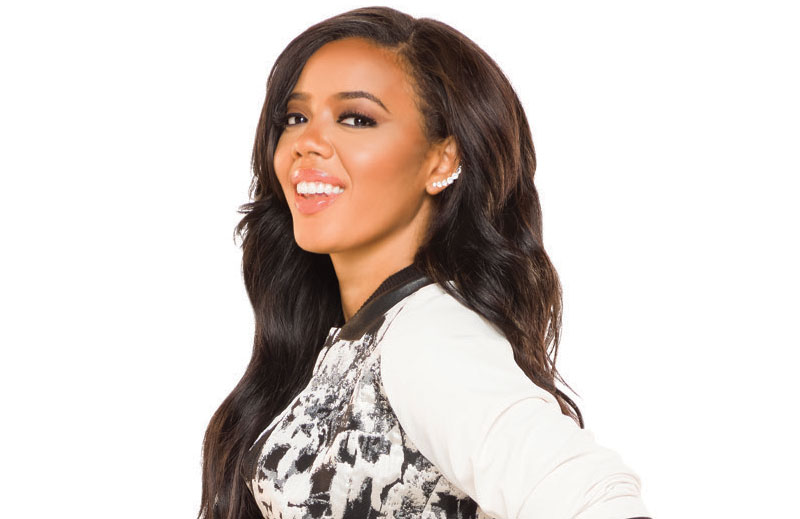 Angela Simmons has definitely grown up since her adolescent days on the hit MTV series Run’s House. But since the show’s ending back in 2009, Simmons has been hard at work developing her brands and performing philanthropic work both domestically and internationally in Haiti. And this January, viewers will get to know the now 28-year-old reality star in a whole new light on WE tv’s new series Growing Up Hip Hop.

With a star-studded cast of hip-hop decedents, including Romeo Miller, Damon “Boogie” Dash, Kristina DeBarge, Egypt Criss and TJ Mizell, cameras follow the cast around as they build their own legacies outside of their parents’ extraordinary musical successes. And while the majority of the crew is following in their parents’ footsteps by pursing careers in the music industry, Simmons knew that fashion was her calling from an early age. “What’s crazy is I can remember being about nine years old and deciding that I love art and I love fashion,” she shared with upscale. Later she added, “I would just sketch all the time, and even have the hat to match. I remember there being the moment where I was like, this is what I’m going to do and it’s something I can make a living out of, something that I love.”

This season on Growing Up Hip Hop, from photo shoots, fashion shows, conference calls and meetings, viewers get a glimpse at Simmons’ day-to-day life as she gets ready to launch her faux fur line Foofi & Bella, which goes on sale December 2016, as well as her lifestyle website AngelaIAm.com, with some dramatic twists and turns along the way.

However, while the fashion designer definitely has her hands full with work, she always puts her health, both physically and mentally, first. “The first thing I do in the morning is to, number one, meditate,” she said. “For me, I try to tie my healthy lifestyle into my daily work. If I’m not fit, then my work’s not going right.”

Outside reality TV and her fashion career, Simmons loves to take time out to help children in need. Along with her GIRLTALK program with the Boys and Girls Club, the daughter of legendary hip-hop artist Rev Run has made frequent trips to Haiti this past year, volunteering with local children. “I found a piece of me there. Just wanting to go and help the children, figuring out how I can build an orphanage there,” she shared. “But also, Haiti is just refreshing, like you would not believe. It’s an incredible place with lots of culture and there’s some incredible people there.” Catch Angela Simmons as she makes her second reality TV debut on Thursday January 7 at 10:00 pm EST, 9:00 pm CST.

BRING WARMTH AND FRESHNESS TO YOUR WINTER BREAKFAST