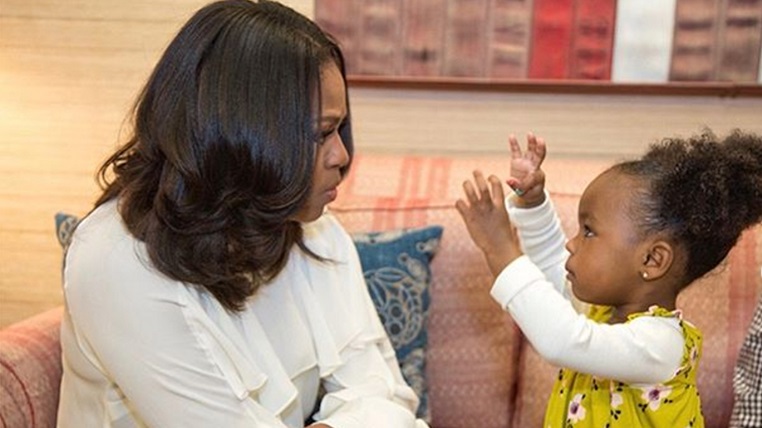 A number of outlets, including BuzzFeed and CNN, picked up Parker’s photo over the weekend. Parker told BuzzFeed’s AM to DM on Monday that she wanted to meet the former first lady and tell her “she’s a queen.”

Obama posted a video of Parker dancing with her to Taylor Swift’s “Shake It Off” in a tweet and on Instagram on Tuesday.

“Parker, I’m so glad I had the chance to meet you today (and for the dance party)!” Obama wrote on Instagram. “Keep on dreaming big for yourself … and maybe one day I’ll proudly look up at a portrait of you!”

Parker, I’m so glad I had the chance to meet you today (and for the dance party)! Keep on dreaming big for yourself…and maybe one day I’ll proudly look up at a portrait of you!

Parker’s reaction to artist Amy Sherald’s rendering of Obama highlights the importance of representation for young children of color. Sherald also shared Parker’s image on her Instagram account and recalled that she was inspired to become an artist after seeing black people represented in paintings.

“I don’t remember a lot about my childhood, but I do have a few emotional memories etched into my mind forever and seeing that painting of a man that looked like he could be my father stopped me dead in my tracks,” Sherald wrote.

During the portrait unveiling ceremony, Obama said she was “thinking about all of the young people, particularly girls and girls of color, who in years ahead will come to this place and they will look up and they will see an image of someone who looks like them hanging on the wall.”