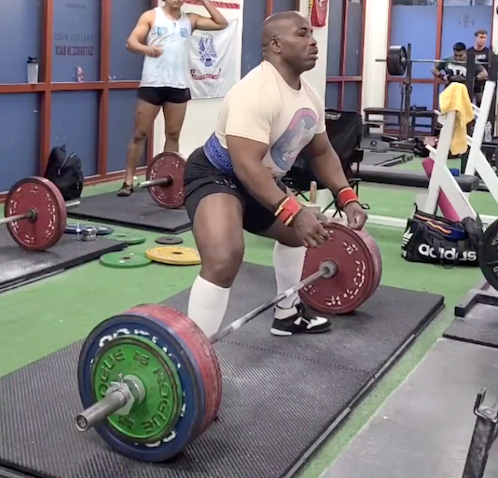 Sixty-three-year-old David Ricks began powerlifting in 1980 and is still competing nationally and breaking records after 40 years.

The Barberton, Ohio, native started competing in powerlifting competitions in 1980 while attending the U.S. Naval Academy. He and his siblings learned strong work ethics from their mother and father, a retired registered nurse and postal worker.

Ricks, a 1981 graduate of the U.S. Naval Academy, was introduced to powerlifting in his senior year. He initially started competing in small local meets. By February of that year, he qualified for the collegiate nationals. Ricks initially thought of powerlifting as a hobby and had no idea that he would be competing for more than 40 years.

When he graduated, he was simply using powerlifting as a way to stay in shape. Between 1983 and 1985, while stationed in Hawaii and working out at powerlifting gyms, he became more interested in competing in local contests. By 1988, while attending the Naval Post-Graduate School in Monterrey, Calif., he shifted from competing locally to nationally. It was then that he found himself competing against the best of the best.

He trains for 10-to-12-weeks to prepare for a powerlifting competition. Ricks states that it is important to strength train in a power gym, where you have people around you to spot you while you lift.

Having hurt himself before while lifting, he does not lift heavy weight without the support of people around him. He is a natural athlete, which means he does not use steroids or other performance enhancing drugs. As such, he points out that you also must be aware of your body’s limitations.

Per Ricks, there is a difference between a person who uses steroids and a person who who does not use steroids. “If you are not on steroids, your body must have recovery time. Whereas someone on steroids does not know when to stop lifting,” says Ricks.

His nutritional intake includes a balanced diet typically of oatmeal and/or two boiled eggs for breakfast, a light lunch and dinner that may include chicken or fish, and a light snack. He drinks lots of water and stays away from sugar, especially while training.

When training for major competitions, he adds dietary supplements. These supplements usually consist of whey protein, creatine, a multivitamin, Omega 3 (for heart health), B-Complex (for energy), C-Complex (for recovery), and turmeric and glucosamine (for joint recovery). He also goes to a sports chiropractor to keep his body in alignment and soaks in warm water with Epsom salt.

By day, the retired naval officer is the County Engineer for Boca Raton County, Fla. As a mature strength trainer, Ricks respects balance in his life.

The Master Powerlifter and International Powerlifting Federation member has a long and impressive record of accomplishments:

He also coaches strength trainers and powerlifters of all ages. He believes the key to success is as much mental as it is physical.  “You have to believe,” he says. “If you think you can’t lift the weight, you’ve already lost half the battle.”

He would like to compete once more in the Open Championships, seeking to break the the record again. He also plans to qualify again in February 2023 for the national competition in the U.S. Virgin Islands. Once he qualifies, he will be in training to compete in June 2023 in the Open World Championships.

Ricks and his wife Julia of 40 years have a son Justin, 35, who resides in Atlanta.

3 People reacted on this