’50 Years of Hip-Hop Fashion’ Panel Examines Then and Now 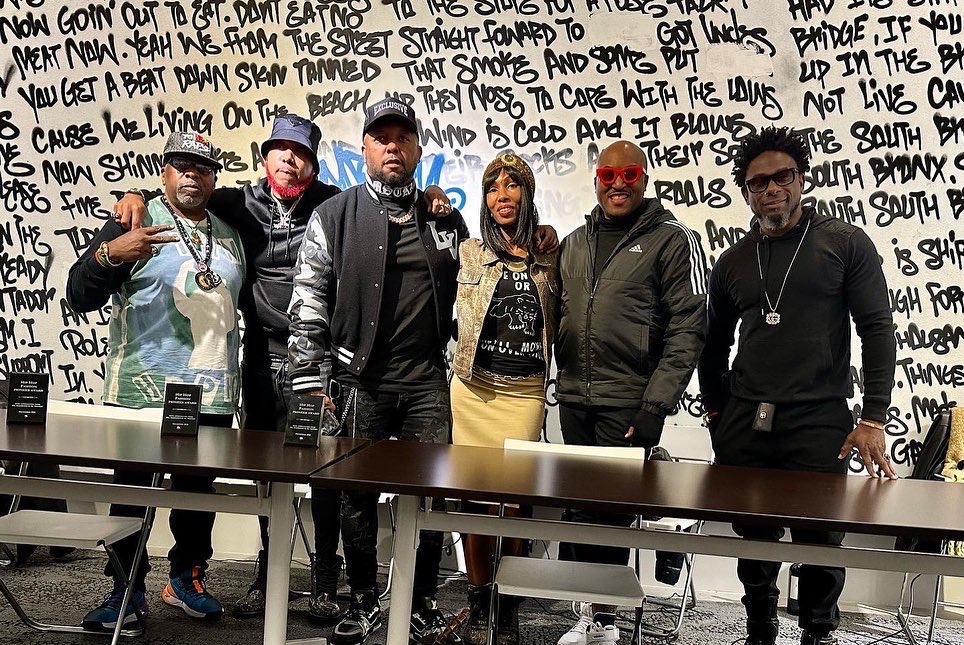 Hip-hop has been propelled across the world as a specific music genre for the last 50 years, but it all started with image. In the world of hip-hop, image is expressed through fashion.

In Atlanta, Ga., this very discussion and celebration of urban creativity and individualism occurred during the “50 Years of Hip-Hop Fashion” event at the Museum of Design Atlanta (MoDA) Museum on Tuesday, December 13, 2022, from 6-8 p.m.

A collaboration between “Upscale” magazine and Sustainable Fashion Week Atlanta, the event was co-organized by “Upscale” fashion editor Dr. Courtney A. Hammonds and society & culture writer Dr. Adia Winfrey. In alignment with MoDA’s exhibition “Close to the Edge: The Birth of Hip-Hop Architecture,” the intimate event was the perfect backdrop to discuss hip-hop fashion.

Hammonds attended a panel discussion about hip-hop culture in France at ATLSFW and saw synergies with Upscale. “This is how the event came to be,” states Tanjuria Willis, founder of Sustainable Fashion Week Atlanta.

Kicking off the panel discussion, Hammonds described his initial exposure to the international hip-hop scene, when he saw graffiti on the Berlin Wall as a child. He described fashion as how people “show up” in a room, reflecting not only their personal taste but inner person.

“If you can walk in a room, and still be insecure, that’s a problem,” he said. “Allow your inner man to have a wardrobe change.”

Later, during the panel discussion, the moderator, Horton, posed the following question: “In the last several years, there has been a rise in rap lyrics about committing crimes, how can fashion positively influence that?”

Tavares reminded attendees of KRS One’s famous words: “Rap is something you do, but hip hop is something you live.” He wanted to express the distinction so the audience understood they were there to discuss hip-hop, not rap.

Hip-hop fashion makes it clear that creativity is not limited to a particular social class. Poverty does not halt creativity. On the contrary, it amplifies it as expressed in hip-hop fashion.

Willis said, “Southern culture and hip-hop culture have many parallels, such as information sharing through the music, telling the story, and how clothing tells the story of who they are and where they are from. . their identity, as well as their individuality.”

As panelists discussed that phase of corporate takeover, other conversations emerged. Another significant issue was the use of hip-hop fashion and its correlation to destructive messages in the genre. Some felt that the genre had deviated from its original purpose.

“I don’t think hip hop has served as a healer to my life and/or the African-American community at large in recent years. The original healing effect has been buried under what seems to be degradation of black women and hyperviolence in the black community,” remarked Horton.

The outlook of all the panelists were united in that hip hop fashion is a restoration of dignity. The attire re-claimed the dignity of African American youth living in the inner city along with Latinos and other minorities.

Atlanta has a particular style in the hip hop fashion scene, according to native Atlantan and founder of Wisdom Fashion House, Latif Rashad. He said at the event, “. . . The Southern elements in fashion and hip-hop are unapologetic and very individual.”

He explained, “Growing up in Atlanta, I deeply feel that its fashion has an element of status. In certain communities, you will see trends become widely painted on everybody as a form of communication that says, ‘I’m up.'”

While being part of the fashion scene as an eyewear designer, Rashad also addressed particular areas in Atlanta that depict the unique taste the city brings to hip-hop fashion culture. “In other pockets, you will find an unapologetic artsy style, which I believe to be influenced by Andre 3000, usually seen in places like Little Five Points, Ponce, or Peter’s Street. My favorite version of Atlanta fashion can be found in places like the High, MODA, or the Atlanta Contemporary. I call it ‘High Street,’ a combination of high fashion and streetwear.”

The four original pillars of hip-hop are rapping/MCing, break-dancing, DJing, and graffiti art. What has started in Atlanta, will continue as a 7-city tour where Hammonds and other esteemed panelists will highlight a fifth pillar of hip-hop culture: Fashion.

The MoDA exhibition will be on display until January 29, 2023.