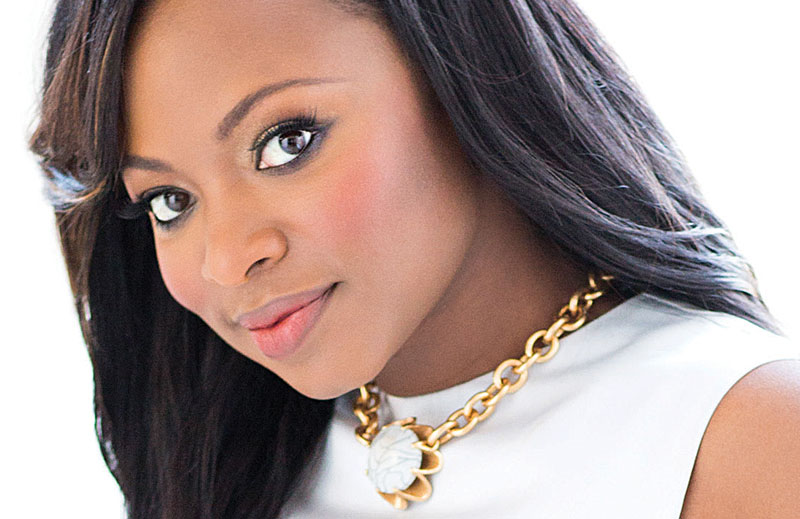 It takes a pretty (yes, looks included) talented woman to be able to go from an R&B girl group to playing Lil’ Kim and a Playboy bunny while nabbing roles in the movie Fame and TV series The Client List as well as on Broadway in between. Enter Naturi Naughton and check each of those off of her list.

She’s been there, done it and is now gearing up for her first leading television role as Tasha opposite Omari Hardwick in 50 Cent’s hit Starz series, Power.

“The show runner and 50 Cent told me that they saw my fearlessness and ability to take risks as an actress when I tested for this role,” the 29-year-old says. “I gave it everything and wasn’t afraid. I had no choice and no options to do otherwise.”

Though Naughton’s resume may rival many that are considered to be at the top of their game, the East Orange, New Jersey, native hasn’t always felt it, personally.

“Even with albums, tours and roles here and there, I’ve had moments where I felt like I wasn’t getting enough,” the former singer of the platinum-selling group 3LW admits.

“It’s not easy being an actress in Hollywood, let alone a black actress. I didn’t come from built-in business connects or a well-known family. I made my own way. I’ve had so many ‘not pretty enough’ and ‘not good enough’ days. I’m blessed to have made it through and am looking forward to what I know will be amazing days ahead.”

Power isn’t just the name of her most recent moment of reckoning, but it also seems to be Naughton’s holy grail.

“This role is helping me grow up a bit,” she says. “I get to grow with the character in my personal life and explore the natural vulnerability of a woman, simultaneously.” In the meantime, she hasn’t completely forsaken her first love—music.

“I’m waiting on the right moment to bring new music and I’m happy with the process,” she shares. “I feel like one of the luckiest girls in the world. My dreams have exceeded so many of my expectations. It makes me feel like I’m here for a reason. I’ve had to work for the roles I’ve gotten. Again, all I can call it is a blessing.”

INDULGE IN LEISURE LIVING ON THE ISLANDS OF TURKS AND CAICOS