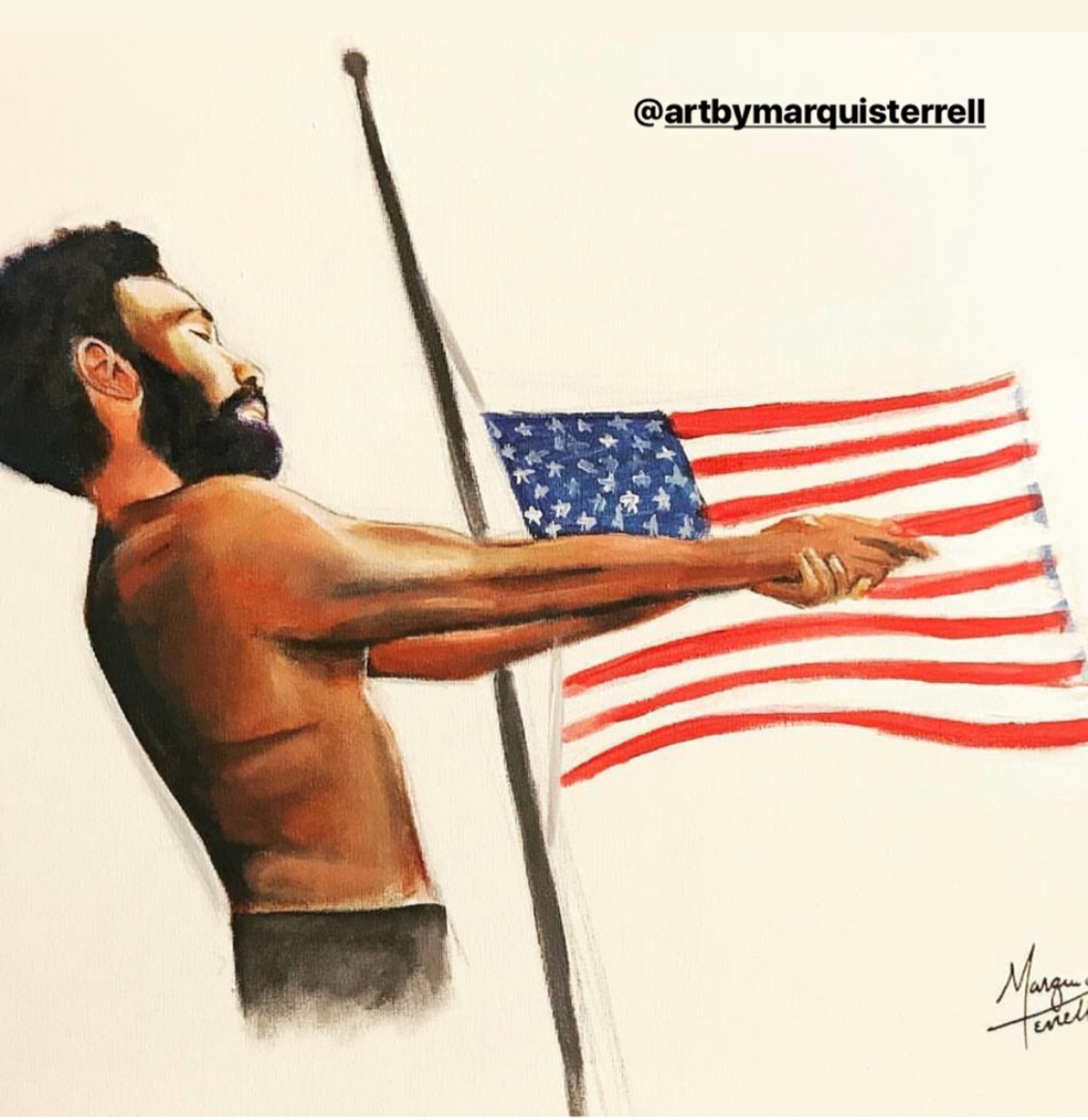 By now, who hasn’t seen Childish Gambino’s, video “This is America”? The video is as shocking as it is filled with true statements about violence in America. Filled with metaphors and imagery, a lot of the messaging has gotten lost along the way. It is important to understand what is going on in the video in order to grasp the full gravity of the song.

First things first, look at Gambino’s outfit. With no shirt, old looking pants and his natural hair, he looks like a slave. The slave imagery is important because it reminds us where we came from in America. Did you catch his pants? It looks like confederate pants. 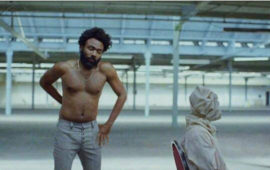 To clear up a misconception, it’s been reported that it is Trayvon Martin’s dad (Tracy) playing the guitar in the video. It isn’t. The guitarist is actually named Calvin the Second. 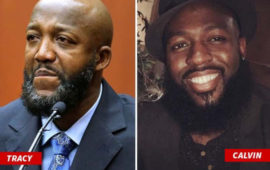 I’ll be honest. It shook me to my core when I thought it was Trayvon’s dad. 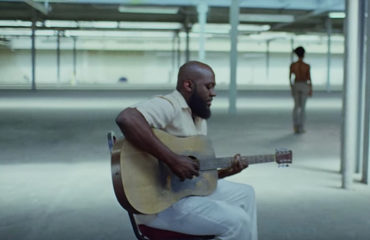 There’s a ton to be said about the NRA and guns in this country. In the most talked about scene in the video, a black man is seen being shot in the head by Gambino. Right after, someone carefully takes the gun away as the man’s body on the ground is hauled away with no regard for his life. The juxtaposition of the gun and how he is hauled away shows us that guns are handled more carefully in America than the lives of black people. And the pose? Even that has meaning. He is imitating a Jim Crow caricature, it’s not some weird pose he came up with. So please, stop with the inaccurate gay jokes and learn your history. 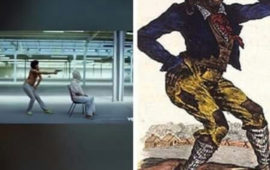 Remember the scene where Gambino takes a gun and murders an all-black choir? It’s a direct reference to the Charleston shooting, obviously. The dancing that takes place afterwards shows the short attention spans Americans have when faced with traumatizing events. It shows we experience shock when we see violence but we become easily distracted by trendy dances and songs. The shock never lasts long. 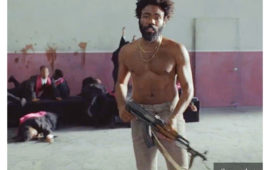 Who didn’t notice the dance moves? They weren’t meant to entertain. The dance moves speak volumes about how easy it is to become distracted by modern trends, despite the violence and otherwise crazy things happening in the background. Rage over what’s going on in the background is either short lived or unnoticed, the dancing is a lot more fun to look at. When Gambino is dancing, it serves as a metaphor about how unaffected rap is by what’s going on in America. With all the violence going on around us, modern rap focuses on money, trapping, sex, and fashion. Maybe Gambino is making a point that we should be using our platform to address violence, the way he is with “This is America”. The days of Biggie and Pac are gone though. Rap is dominated by people born in the late 90’s. This younger generation of black artists are so far removed from the black struggle because they were born into a world very different from their parents and grandparents. It’s also unrealistic to expect artists to mainly focus on violence because it doesn’t sell. 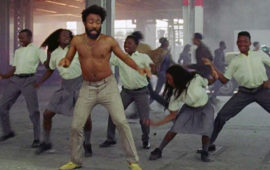 The exaggerated smiles and poses invoke the racial coon caricature of Jim Crow. It seems he is making a statement on black people cooning in order to get ahead and to make money. Modern rap has been accused of being a minstrel show filled with coonery. One of the lyrics “Grandma told me, get your money, black man” stands out because it is what the choir is singing before he kills them with an automatic gun. It begs the question if black people feel the only way to attain wealth is through stereotypical entertainment- singing, rapping, comedy, sport. Like Gambino, I find the question annoying and repetitive. It explains why he shot the choir- he was tired of the question and the message behind it. Gunning down the choir singing this lyric says that he’s tired of the pressure to amass wealth, be performatively black and stay spiritually uplifted in a country that promotes gun violence. It also sends the message that there has been too much of an intermingling between the black church and the root of all evil, money. 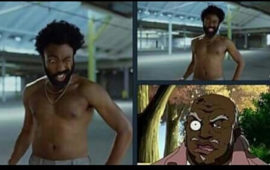 Did you catch Sza in the background? This could mean some new music and a collab from them both. Notice her hair? It is styled like the crown on Lady Liberty. 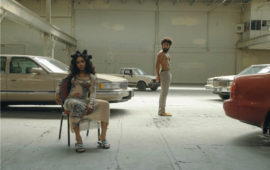 Some other notable catches was the extra with the Supreme money gun making it rain (1:30). In such chaos, why not make it rain? This reminded me of episodes of LHHATL where they are fighting then suddenly someone takes out a bunch of singles to make it rain. It’s pointless. The ad libs are also incredible. Any of the ad libs sound familiar? They should: 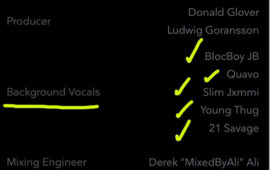 The line “this is a celly/this is a tool” is powerful and has multiple meanings. On one hand, it can be a reference to the recent shooting of Stephon Clark, whose cell phone was mistaken for a tool, or gun. He could be oversimplifying the clear difference between the two since police officers have a hard time distinguishing between cell phones and guns when they are in the hands of black people. On the other hand, it’s hard to miss the kids in the background, with their covered faces and cell phones. Gambino could be playing on words saying that cell phones are now tools because the kids are using their phones to record the world around them. With all the evidence and violence that has been captured, very little is done in terms of justice. He also seems to make a point that when tragedy strikes, people pull out their cell phones instead of actually fixing the problem; it’s easier to record the problem then do something about it. 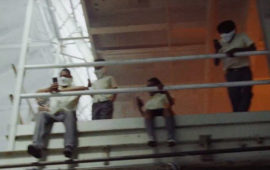 The kids dancing in the video shows that with all the violence around us, black children gravitate to what’s cool and feels good. It is easier to dance and follow Gambino than it is to stop deal with the world around them. After all, they are kids. What more can we expect? Also notice the police running around in the background, adding to the chaos instead of controlling it. Some would say they are dancing around the issues that plague the black community. 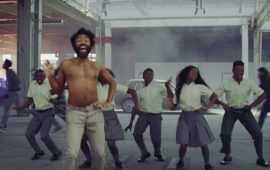 Did you notice the scene where there is a man on a horseback chasing another man? It’s hard to tell if the man is running away from the horse or the chaos. He could be making a statement on homosexuality, or not. The more obvious answer is this is a representation of Death riding a the Pale white horse followed by Hell (the police). Check out Revelations 6:8 KJB for the reference. 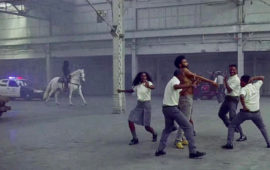 The end of the video shows him dressed as a slave running away from a white mob. Self-explanatory. #GetOut 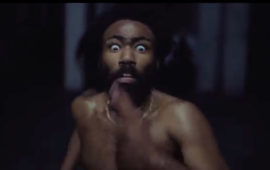 The irony here is the main protagonist in the movie “Get Out” dated a white girl. Childish Gambino, like the main character, also has affection for a white woman, as he has a white wife. Is he trying to make a statement regarding interracial relationships in America? Probably not but the imagery is relevant to his reality. 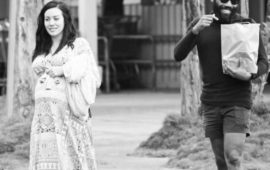 What better way to memorialize this video into pop culture than memes: 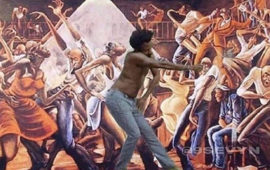 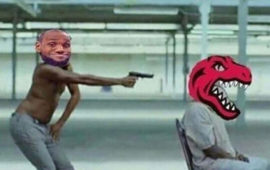