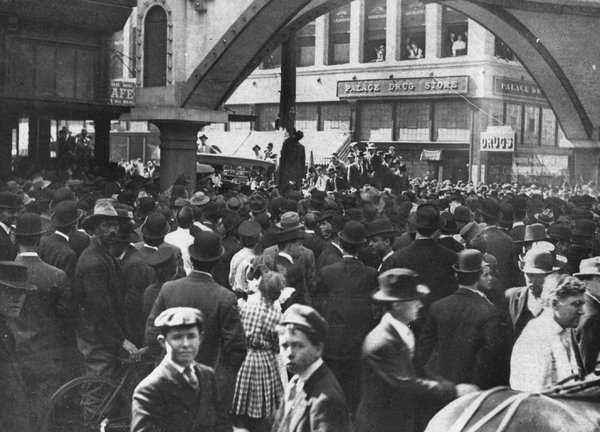 DALLAS — A block from the tourist-swarmed headquarters of the former Texas School Book Depository sits the old county courthouse, now a museum. In 1910, a group of men rushed into the courthouse, threw a rope around the neck of a black man accused of sexually assaulting a 3-year-old white girl, and threw the other end of the rope out a window. A mob outside yanked the man, Allen Brooks, to the ground and strung him up at a ceremonial arch a few blocks down Main Street.

South of the city, past the Trinity River bottoms, a black man named W. R. Taylor was hanged by a mob in 1889. Farther south still is the community of Streetman, where 25-year-old George Gay was hanged from a tree and shot hundreds of times in 1922.

And just beyond that is Kirvin, where three black men, two of them almost certainly innocent, were accused of killing a white woman and, under the gaze of hundreds of soda-drinking spectators, were castrated, stabbed, beaten, tied to a plow and set afire in the spring of 1922.

The killing of Mr. Brooks is noted in the museum. The sites of the other killings, like those of nearly every lynching in the United States, are not marked. Bryan Stevenson believes this should change.

On Tuesday, the organization he founded and runs, the Equal Justice Initiative in Montgomery, Ala., released a report on the history of lynchings in the United States, the result of five years of research and 160 visits to sites around the South. The authors of the report compiled an inventory of 3,959 victims of “racial terror lynchings” in 12 Southern states from 1877 to 1950.

Next comes the process of selecting lynching sites where the organization plans to erect markers and memorials, which will involve significant fund-raising, negotiations with distrustful landowners and, almost undoubtedly, intense controversy.

The process is intended, Mr. Stevenson said, to force people to reckon with the narrative through-line of the country’s vicious racial history, rather than thinking of that history in a short-range, piecemeal way.

“Lynching and the terror era shaped the geography, politics, economics and social characteristics of being black in America during the 20th century,” Mr. Stevenson said, arguing that many participants in the great migration from the South should be thought of as refugees fleeing terrorism rather than people simply seeking work.

The lynching report is part of a longer project Mr. Stevenson began several years ago. One phase involved the erection of historical markers about the extensive slave markets in Montgomery. The city and state governments were not welcoming of the markers, despite the abundance of Civil War and civil rights movement memorials in Montgomery, but Mr. Stevenson is planning to do the same thing elsewhere.

Around the country, there are only a few markers noting the sites of lynchings. In several of those places, like Newnan, Ga., attempts to erect markers were met with local resistance. But in most places, no one has tried to put up a marker.

Efforts to count the number of lynchings in the country go back at least to 1882, when The Chicago Tribune began publishing each January a list of all executions and lynchings in the previous year. The Tuskegee Institute began releasing a list in 1912, and in 1919, the N.A.A.C.P. published what its researchers said was a comprehensive list of lynchings in the previous three decades. In 1995, the sociologists Stewart Tolnay and E. M. Beck researched the existing lists, eliminated errors and duplicates, and compiled what many consider the most accurate inventory to that time.

The report released Tuesday says that the new inventory has 700 names that are not on any of these previous lists, many of which Mr. Stevenson said were discovered during the compilation of the report.

Professor Beck, who teaches at the University of Georgia, has not reviewed the new list. But he pointed out that, with racial violence so extensive and carried out in so many different ways, compilers of lists may differ on what constitutes a lynching; the new list, as opposed to some previous ones, includes one-time massacres of large numbers of African-Americans, such as occurred in Arkansas in 1919 and in Louisiana in 1887.

“If you’re trying to make a point that the amount of racial violence is underestimated, well then, there’s no doubt about it,” Professor Beck said. “What people don’t realize here is just how many there were, and how close. Places they drive by every day.”

Among Professor Beck’s findings were that the number of lynchings did not rise or fall in proportion to the number of state-sanctioned executions, underscoring what Mr. Stevenson said was a crucial point: that these brutal deaths were not about administering popular justice, but terrorizing a community.

But, he continued, even when a major crime was alleged, the refusal to grant a black man a trial — despite the justice system’s near certain outcome — and the public extravagance of a lynching were clearly intended as a message to other African-Americans.

The bloody history of Paris, Tex., about 100 miles northeast of Dallas, is well known if rarely brought up, said Thelma Dangerfield, the treasurer of the local N.A.A.C.P. chapter. Thousands of people came in 1893 to see Henry Smith, a black teenager accused of murder, carried around town on a float, then tortured and burned to death on a scaffold.

Until recently, some longtime residents still remembered when the two Arthur brothers were tied to a flagpole and set on fire at the city fairgrounds in 1920.

“There were two or three blacks who were actually around during that time, but you couldn’t get them to talk about it,” Ms. Dangerfield said.

She helped set up an exhibit in the county historical museum, the only commemoration of the lynchings she knows of in a town with prominent public memorials to the Confederacy. The prospect of a permanent marker had not occurred to her.

“It would be a fight,” she said. “Someone is going to have some resistance to it. But you know, I think it wouldn’t hurt to try it.”

Correction: February 10, 2015
An earlier version of this article misspelled the name of the Texas town where three black men were killed in the spring of 1922. It was Kirvin, not Kirkin.
PREVIOUS