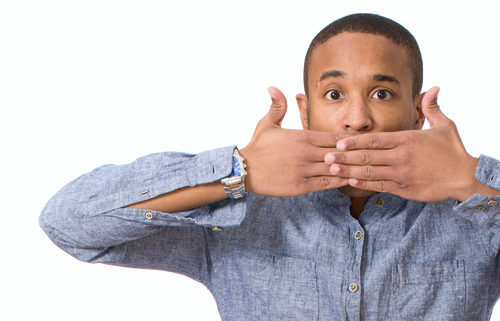 We all have secrets that we prefer to keep…well…secret. When it comes to men, no matter how long you’ve been dating or how long you have known each other, it’s more likely than not that there are a few things he has yet to tell you, and that he may never tell you, unless you really pressure him to talk about it and let you in on it. Here are 14 secrets men keep from women, so be prepared for it.

1. That he had money issues

Men like to be the breadmakers of the family and rarely will you find a guy who will outright tell you that he’s had or is currently going through some money problems. Men can easily feel insecure when their finances aren’t in check and the feeling multiplies when he has to admit it to a woman he likes or loves. Men are supposed to be providers and when a man feels like he’s failing at that, he’s likely to keep it to himself.

2. That he was in a career rut

This goes along with the money problems. Men pride themselves on having a job that brings him a lot of success and a steady flow of income to his bank account. If your man was ever unemployed or if he had a really low paying job, he may not ever tell you about it, as it would make him insecure and he’d more than likely fear that you’d see him as less of a man.

3.That they need women to feel like a man

Okay so men will always feel like men, but when it comes to most men, it can often take a woman to make a man feel like he’s actually a man. Men feel amazing when a woman notices how strong he is or how masculine he is. When a woman doesn’t recognize these values, a man can easily feel insecure. So though most men will keep it a secret, a man needs a woman to add to his self-worth.

4. That he likes to cuddle

Not a lot of men will admit that they like to cuddle. Cuddling is for women; it’s feminine, and he’s only doing it because he knows you like it. But deep down, most men really enjoy cuddling, but they will always keep that a secret. Saying that he likes to cuddle is a big blow to his strong tough manly side. When your man reaches over and pulls you tight, he’s not only doing it for you, he’s doing it for himself as well.

5. That sometimes he just wants sex

Once you’ve been with a guy for a while, sex goes out the window and in comes love making. When there’s so much emotion involved, it’s nice when there is romance to go along with it. So while it’s always enjoyable, for him and you both, to make love for hours, sometimes a man just wants to get things done and over with. Of course, you may not ever hear this escape his lips.

6. That he lies to keep things calm

We’ll call these white lies, but we’ve all told them. Men are notorious for telling white lies, especially when it means keeping the peace and being able to enjoy things as-is. When a man knows what ticks you off or knows what pushes your buttons, he’ll do and say anything to avoid doing so, even if it means telling a little white lie. If you catch him in one, talk it out.

7. That he was looking at another woman

We all have eyes and we’ve all had a case of wandering eyes. Surely you’ve checked out an attractive man you saw walking by so why wouldn’t your man check out a good looking woman? It’s human instinct and it should be allowable for your man to ogle every once in awhile. Of course, a man will never admit to checking out another female, but if you catch him doing it way too often, feel free to speak up about it.

As women, we’re known to be extremely critical of ourselves. We’ve all had those morning when we look in the mirror and wonder where those love handles came from or why our pants aren’t fitting as nicely as before. While most men won’t admit to it, they also have these same fat days. From beer bellies to a lack of muscle definition, men have those bad days as well.

9. That he doesn’t always understand

Women are known to spend time at work or at school thinking about deep topics, especially those concerning their relationships. Once you think about it all you come home and realize that you and your man need to talk, so you talk and he’s nodding his head and saying that he understands. Though he’s nodding and agreeing in a sense, most men really don’t understand but they know that protesting during a talk like this is a cause for even more trouble.

10. What he really thinks of that dress

We’re all guilty of asking our man whether or not this dress or these pants make us look fat, and if you have a wise man, he should have answered with a polite and loving “no.” While your man is telling you that you don’t look fat, and he truly believes that, in his mind he’s honestly thinking that all of your dresses, skirts, and pants look the same to him. The red dress looks just like the black one and those pants look just like your jeans. In the end a man just wants his woman to feel good about herself, but he will always settle for the easy answer.

11. Bad memories from the past

Men are similar to women in the fact that we like to suppress our bad memories, especially those from childhood. If a man had a rough time with a parent, especially his dad, it’s unlikely that he will talk about it fully, and if he does, he’ll only give you the details that he wants to share. Sometimes these memories are best kept in the past.

Not all men will have secret sexual fantasies, but some definitely will. No matter if it’s just super risque or maybe even a little bit embarrassing, there are some fantasies that a man will just keep to himself. However, if you’re curious about your man’s deepest and darkest fantasies, just tell him one of yours. He’ll be inclined to tell you his.

13. That he sometimes wants you to just shut up

Unless a man is extremely bold, rarely will you find one that is willing to tell you that he just wants you to be quiet for a little while. Men are horrible at multitasking so talking to him about a party next month while he’s trying to relax and watch TV is typically a no-go, at least for him. And while he’ll probably be listening somewhat, he’s secretly wanting you to just be quiet and let him unwind in peace.

14. He does go play ball to spend some time away from you

We like to think that our men go out and play ball or go golfing every other weekend because it’s enjoyable and fun. But, though a man will never admit it, the truth is that most men do these activities just to have some time away from you. The absence of you and any part of home life is pretty relaxing for any man and though it seems mean, at the end of the day, your man still loves you; he just wants some him time with the boys.

15 Luxury Destinations to Travel If Money Were No Object