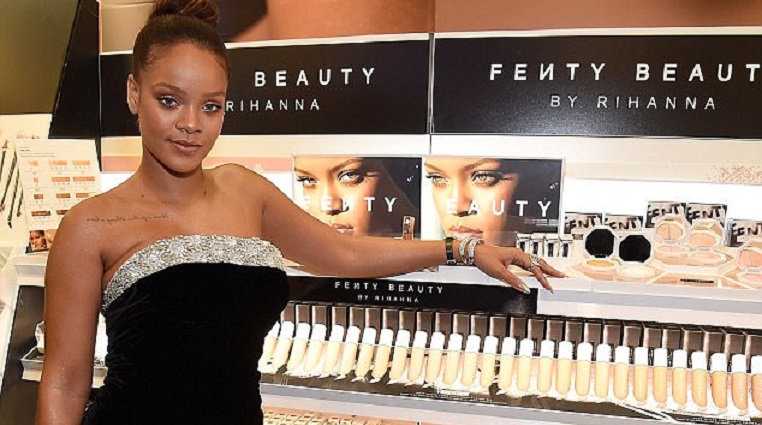 Millennial women and Latinas are fueling a dramatic growth in the cosmetic industry with preferences towards brands that are multiculturally aware. That’s a good sign for RiRi.

The beauty industry can no longer afford to ignore that women come in all colors, and — more importantly — that they are willing to shell out cash for the perfect foundation.

This appears to be at the heart of Rihanna‘s makeup line, Fenty Beauty, which was introduced on Friday, September 8, 2017, and — unlike, say, Kim Kardashian’s new makeup line, which has thrived, in part, on its scarcity — is only available at Sephora.

Rihanna, whose iconic style has landed her partnerships with brands like Dior, Balmain and Puma, created a makeup line with women of color in mind: It has 40 shades of matte foundation, 30 shades of makeup sticks, and 6 highlighter shades.

The debut of her cosmetics line comes at a time when young women (ages 18 through 34) and Latinas account for almost 60 percent of all beauty sales in 2016, according to TABS Analytics, a marketing consultancy.

The beauty market was worth roughly $25 billion last year. Latinas spent roughly $4.3 billion on beauty products last year, and black women spent $2 billion, according to research by Mintel. Of the $2 billion black women consumers spent on beauty, 47% went towards cosmetics.

Rihanna’s Fenty Beauty line arrives at an opportune time: Analysts who track the market for beauty products say that millennials and women of color have been fueling dramatic growth in the industry. Millennial and Latina women are the biggest buyers of cosmetics, and they tend to gravitate toward brands that cater to diverse racial and ethnic groups, according to a 2016 TABS Analytics report.

Latina women represent 24 percent of “heavy buyers” of cosmetics meaning they buy cosmetics 10 or more times a year, according to TABS Analytics.

Asian and black consumers are driving growth across all personal care products, including skin care and fragrance, Anya Cohen, an analyst at the market research firm IBISWorld, told BuzzFeed News. In 2016, Latinos represented 26% of spending on personal care products, Asians made up 26% and blacks made up 23%, compared with 27% of spending by white consumers, Cohen said.

With such high spending among women of color, Cohen said, this could mean that there is a lot of money to be made in selling products that take into account a broad spectrum of skin tones.

“There is a clear demand for these products,” she said, and “It makes it lucrative to be entering this retail sphere at the moment.” (Plus, it presumably helps to be Rihanna.)

Black women don’t use makeup as regularly as their Latina counterparts, Toya Mitchell, an analyst with Mintel who focuses on multicultural research and black consumers, told BuzzFeed News.

When it comes to foundation, black consumers tend to research their options conscientiously, said Mitchell of MIntel.

“Black women are more likely to shop across any type of store — that is a dollar store or a prestige makeup counter — because she wants to make sure she’s buying the right brand,” Mitchell said. “Prestige is very important when it comes to foundation, because she can look at it and try it, and she has an expert to help her find the right skin tone.”

Already, makeup brands like Estée Lauder have expanded their product lines to appeal to women of color. Last year, the company bought Becca — a brand known for its highlighters that are compatible with a range of skin tones — for a reported $200 million. In a separate deal, it also bought Too Faced — a brand popular with young women for its range of playful colors — for $1.45 billion (yes, that’s billion, not millions). It was the largest acquisition in the company’s history.

Shortly after Lupita Nyong’o won an Oscar for her role in “12 Years a Slave” in 2014 she won a deal with Lancôme to expand its range of foundations.

“I think it has to do with the idea that sometimes those groups, both millennials and people with multi-ethnic backgrounds tend to be beauty enthusiasts,” Linda Bolton Weiser, a senior analyst with Davidson Equity Capital Markets, told BuzzFeed News about Estée Lauder’s acquisitions. “They’re willing and interested in trying different beauty products.”

“It’s just really, really cool that her line has so many different shades of brown and dark brown,” she said. “That alone is making me want to go out and support her no matter what. She had us in mind, compared to other brands that just give us three shades.”

The limited options for foundation has put many makeup artists in tough situations where they’re mixing cream foundations with color correctors to get the right shade, Lieszek and other makeup artists said.

“It’s just really, really cool that her line has so many different shades of brown and dark brown,” said one makeup artist. “That alone is making me want to go out and support her no matter what. She had us in mind, compared to other brands that just give us three shades.”

Kay-lani Martinez, a 26-year-old freelance makeup artist based in Orlando, Florida, shared that she once mixed foundation with a contour stick on a young client for prom because it was her only option.

“I could see in her face it was upsetting, especially as such a young girl,” she said. “You’re excited to go to prom, and you’re excited to get your makeup done, and we have to use something that isn’t meant to be put on all of your face, because nothing else works for you.”