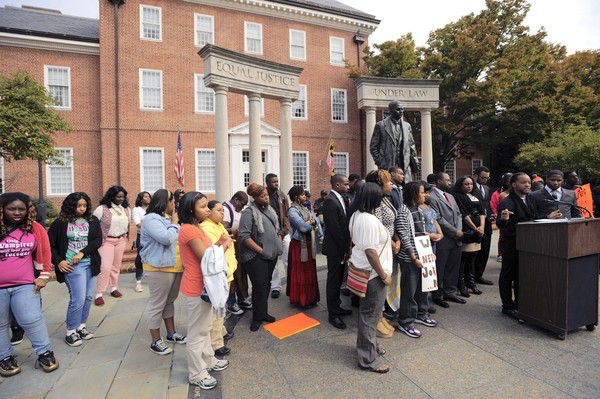 About 40 demonstrators led by the Rev. Jamal H. Bryant blocked traffic for more than an hour on Interstate 395 in Baltimore Tuesday morning — the first of what Bryant said would be “10 biblical plagues” unless state officials scrap plans for a $30 million youth jail.

At the protest, which snarled traffic for miles and created backups that lasted two hours, Bryant demanded that Gov. Larry Hogan reverse funding for the jail and pump $11 million more into the city’s schools.

“State of Maryland, brace yourself, because you’ve got nine more times,” Bryant said. “Nine more times you are going to hear from us.”

The blocking of rush-hour traffic drew criticism from some who suggested it prevented hospital workers from reaching medical centers and patients from getting treatment. Former state Sen. Clarence M. Mitchell IV, the host of a radio talk show on WBAL, said callers were angered by the disruption to their morning commutes.

“This is the height of irresponsibility,” Mitchell said. “I had a person call my show who was part of a surgery team who could not get to the hospital. When you do this, you literally put people’s lives in jeopardy.”

Mitchell said he was concerned that police didn’t arrest any protesters, which he argued would embolden more demonstrators to block major roadways.

“You can’t allow that in a major city,” he said.

Mayor Stephanie Rawlings-Blake has teamed up with Bryant several times in recent months, appointing him to lead a task force that studied police body cameras and to an anti-violence initiative aimed at reducing homicides among African-American men. Even so, on Tuesday she criticized the protest as going too far.

“I understand and respect the right to protest,” Rawlings-Blake said. “When you are putting people at risk by shutting down major thoroughfares, that’s beyond reasonable protest. We were very clear with the protesters this morning that wasn’t going to be tolerated.”

But the mayor said she agrees with the activists’ concerns.

The three-member state panel, which is chaired by Hogan, voted two weeks ago to approve plans for a $30 million, 60-bed jail to house Baltimore teenagers charged as adults. The project, developed during the O’Malley administration, followed years of criticism about the practice of housing young city defendants alongside adults.

For more information on this story visit Baltimore Sun

CIARA IS THE NEW FACE OF ROBERTO CAVALLI