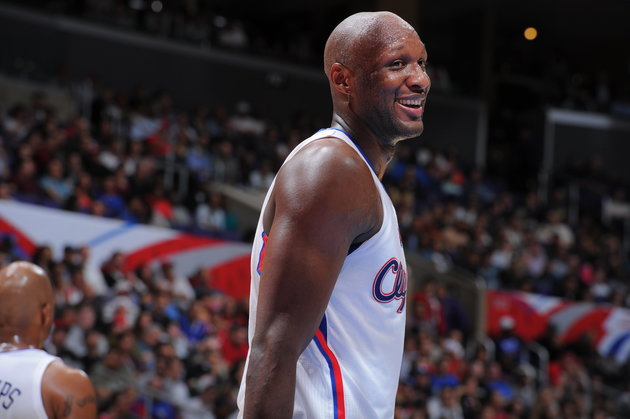 NBA players everywhere are reacting to news that former NBA star Lamar Odom is “fighting for his life” after being hospitalized. Odom was found unconscious in a Nevada brothel on Tuesday afternoon and remains in a coma, according to multiple reports.

PRAYERS all the way UP for my brother Lamar Odom!!!

I can’t help but to be up right now… THINKING about my ex teammate/ friend LO.. On my knees praying…please God let him pull thru.. — DWade (@DwyaneWade) October 14, 2015

Lamar Odom is stronger then most ppl on this planet. His heart is made up of love. He will be fine in time. The lord will use his testimony!

Prayers go out to Lamar Odom, he’s been through a lot, an incredible person, praying for you bro, just fight another battle. #QueensBoys — Charlie Villanueva (@CVBelieve) October 14, 2015

Praying for my bro L.O … Real talk to young for this …

Praying for you LO #luckylefty

Praying for my brother, my teammate LO #classof99

Damn this hurt!! Never wanna see any brother go out like this! Prayers up. Love yourself my young Gods and Goddesses! — Jordan Crawford (@jcraw55) October 14, 2015

Prayers up for Lamar Odom. Hoping he keeps fighting and makes it through! — Eric Gordon (@TheofficialEG10) October 14, 2015

Good morning… My thoughts and prayers go out to Lamar Odom this morning. Everybody needs somebody. — Mike Kidd-Gilchrist (@MKG14) October 14, 2015

Just hearing about LO. Praying that he pulls through. ..hes had a tough life. — Anthony Tolliver (@ATolliver44) October 14, 2015

I’m praying really hard for my bro @RealLamarOdom please God bring him through this! He needs you! I’m praying for him and his family! — Rasual Butler (@RasualButler45) October 14, 2015

Prayers to Lamar Odom. One of the lefties I looked up to growing up! God bless

Man this Lamar Odom news hit me hard.. Can’t sleep. Feels like a family member is fighting for his life. — BoobysWorld.Com (@BooBysWorld1) October 14, 2015

NEW TRAVEL-SIZE BOTTLE OF CHANEL No. 5