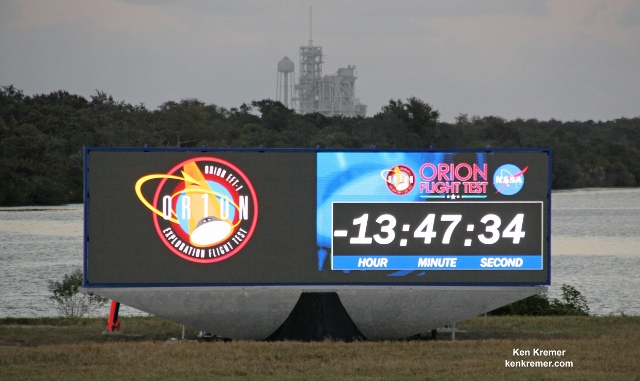 NASA has a new state-of-the-art space capsule on the launch pad and a new high-tech countdown clock to go with it.

The multimedia display was lit up Tuesday and counting down the hours, minutes and seconds until Thursday morning’s liftoff of Orion on an unmanned orbital test flight. It’s the nation’s first new spacecraft intended for true outer-space travel by humans since the Apollo moon program.

What better way to usher in this new era of exploration, NASA reasoned, than with the latest flat-screen gizmo.

So last week, down came the countdown clock that dated back to the Apollo 12 moon shot in 1969 and signaled every space shuttle launch for 30 years. And up went the new display in the same exact spot at the Kennedy Space Center press site that, along with the nearby flag pole, had once earned national historic designation.

The new clock is just as long at 26 feet, but a foot taller at 7 feet.

NASA spokesman George Diller said the old clock, while still working, had become too expensive to fix and maintain. Parts were hard to come by. (It used 349 light bulbs to illuminate the hours, minutes and seconds, the colons and the plus and minus signs.)

“It was just becoming an antique,” Diller said.

The new $280,000 display, similar to those used at sports stadiums, can provide multiple images in addition to the countdown time. “An electronic billboard,” explained Mike Bolger, a NASA ground systems manager.

On Tuesday, the countdown numbers ticked down in the lower right corner — far smaller than on the old familiar clock. But that’s because the left half of the display showed a real-time, close-up image of the Delta IV rocket launch pad. In the upper right corner, the words “Orion Test Flight” showed in red, sandwiched between an Orion emblem and the NASA logo.

NASA took pains to keep the scene basically the same, with the clock and flag pole, according to Diller. Even so, more than a few space-age veterans were sorry to see the old, familiar clock hauled off. Diller tried to be philosophical about the switch: “We won’t have to worry about changing the light bulbs anymore.”

This inaugural Orion — scheduled for a 7:05 a.m. EST send-off — will carry no crew during the 4½-hour test flight and be confined to Earth orbit. But it will aim for a high point of 3,600 miles on the second loop of the planet, setting the spacecraft up for a 20,000-mph, 4,000-degree re-entry. Splashdown will occur in the Pacific, 600 miles southwest of San Diego.

For this launch, a Delta IV rocket will do the heavy lifting.

Future Orions will be launched aboard NASA’s still-in-development Space Launch System, or SLS, intended to carry astronauts to asteroids, Mars and beyond.

One plan calls for an asteroid to be corralled in orbit around the moon, so an Orion crew can explore the rock sometime in the 2020s. Mars expeditions would follow in the 2030s.

NASA is counting on the new countdown clock to be around for all that.

The space center hopes to reassemble and display the old clock at its tourist stop next year.

THE PUSH FOR POLICE OFFICERS TO WEAR BODY CAMERAS