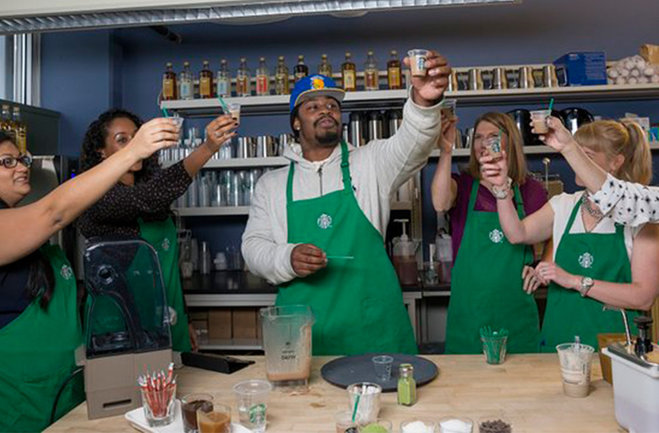 Marshawn Lynch approached the fun challenge of creating a new Starbucks Frappuccino® blended beverage to benefit his foundation with the same decisive action that’s made him one of the NFL’s top running backs.

Lynch, sporting a Starbucks green apron in a test lab deep inside the company’s Seattle headquarters, began mixing Frappuccino flavor combinations that have never been tried before.

As the Seattle Seahawks star sipped a double chocolate Frappuccino with added protein powder and some raspberry drizzle, he flashed a satisfied grin. Lynch was getting closer to the final blend for a new beverage that will take on his nickname – Beast Mode.

“I’d drink this before a workout,” Lynch said. “You could get your buff on with this.”

Though Lynch focused on the task of developing a new Frappuccino beverage, his mind was also on the ultimate goal of helping to empower more inner-city youth in his hometown of Oakland, California and throughout the U.S.

Lynch and Buffalo Bills quarterback Joshua Johnson cofounded the Fam 1st Family Foundation in 2011 to mentor underprivileged youth on the importance of education, literacy and self-esteem. The foundation conducts free summer football camps, hosts talent shows, collects back-to-school supplies and donates food and toys during the holidays to those in need.

Through the foundation, Lynch said he’s been able to see students “who came from so little” get hands-on learning experiences and go on to do well in school and excel in college. Recently, a student who attended the Fam 1st Family Foundation’s architecture summer camp earned a scholarship to a prestigious program.

“It is so important to Josh and me that these kids are able to excel in school and life against all odds,” said Lynch. 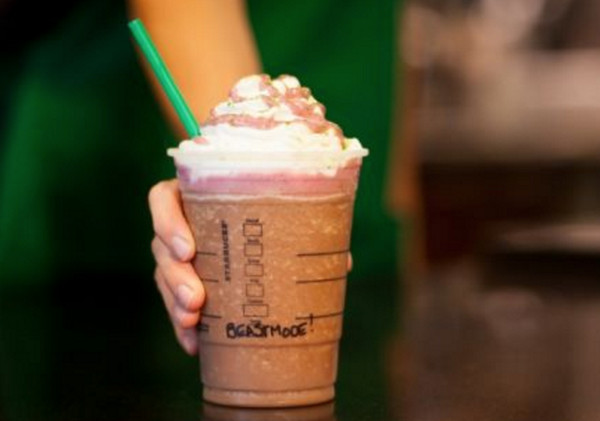 The Perfect Combination of Two Missions

The combination of Lynch and Starbucks is as perfect as the blend of chocolate and mint in the new Beast Mode™ Frappuccino.

Like Lynch, Starbucks is on a mission to support young people with a focus on 16- to 24-year-olds who are not in school and are not employed. There are nearly 6 million people in the U.S. today in that demographic. They’re often called “opportunity youth” because not only are they seeking opportunity, but they represent untapped opportunity for businesses needing new talent. Starbucks has committed to hiring 10,000 Opportunity Youth by 2018.

In addition, Starbucks is working with other like-minded companies to collectively hire 100,000 opportunity youth over the next three years. The 100,000 Opportunities Initiative held its first job fair and forum in Chicago this summer, resulting in more than 800 job offers from 30 companies.  The coalition expects to find work for hundreds more young adults through the next Opportunity Youth Hiring Fair and Forum in Phoenix on October 30.

“When you believe in a young person, you’re opening up a pathway to meaningful employment and lifelong opportunity,” said Blair Taylor, Starbucks chief community officer. “We are thrilled to be working with Marshawn and his foundation as we collectively work towards supporting youth who are not just looking for a second chance, but the opportunity to dream big and win.”

What’s in a Beast Mode Frappuccino?

For every Beast Mode™ Frappuccino® blended beverage sold throughout the football season in Washington and Oakland, Starbucks will donate 24 cents – which coincides with Lynch’s number – to the Fam 1st Family Foundation, up to $100,000. Starbucks will kick off the new collaboration and beverage with a minimum $24,000 contribution to the foundation.

The new blended beverage, as unique as its creator, is a double mocha Frappuccino with a hint of mint and cream and just enough protein powder to unleash your inner Beast Mode. It’s topped with whipped cream, then finished with a purple berry drizzle and a sprinkle of matcha.

“I’m all ‘bout that,” said Lynch, as he signed off on the official recipe.