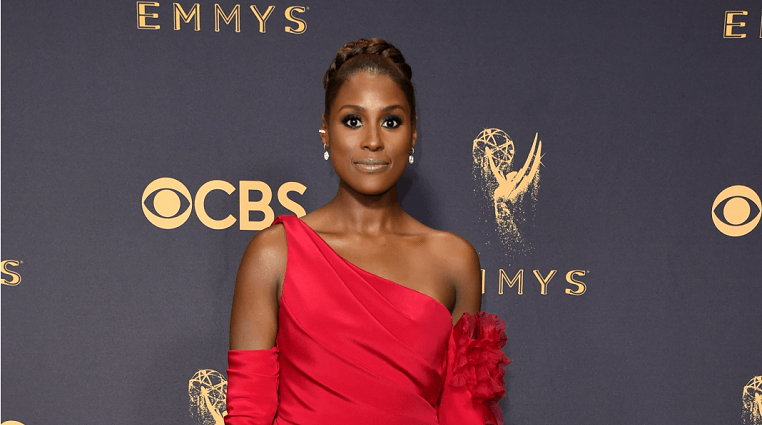 You can always count on Issa Rae for a lot of things — to be relatable, to be funny, to be stunning, and of course, to be awkward. But you can also count on her to keep it real, no matter who is watching or who she’s talking to. Like that time she said in a Hollywood Reporterroundtable that the TV character she most related to growing up was Moesha Mitchell. As she put it, she “was the last person I felt like, ‘That was me,’ and then Black people disappeared from television.”

@issarae how beautiful and sweet are you? Thank you for the love. Congrats on being the gift you are meant to be?

Or also like that time she was asked who she was rooting for at the Emmy’s and promptly said, “I’m rooting for everybody Black.” That happened last night, actually:

Because why lie, right?

While most of us get it because we all do it from home (rooting for and celebrating our own people on awards night that is), unfortunately, quite a few people tripped and fell over their feelings last night and tried to chide the Insecure creator for being “ignorant.”

“Yeah don’t worry about talent or substance but root for color yet be mad about being defined and marginalized bc of skin??” one person said.

“Now what if a white person got up there and said their [sic] rooting for everybody white?!? Smh” said another.

As you can see, a lot of the uproar, if you want to call it that, was quite surface level, and it focused on the backlash there would be if a white person said something similar. It was tired, as usual. And after reading most of the fake outrage, all I could think was, “White folks, not everything is about you. Get some business and stop being so threatened all of the time.”

I couldn’t really get with the commotion because honestly, I’m so tired of people assuming that when a person is pro-Black they’re automatically being anti-White or anti-everybody else. It’s not an affront to anyone else for a Black person to want to see other Black people succeed in an industry that requires initiatives and controversy to push for diversity. We all know the reasons someone like Issa Rae or everyday people like ourselves would root for Black people nominated for telling unique and fresh Black stories. The people who are upset on the other hand, don’t, and should probably do some research and reading into that for some perspective, but we all know that’s not going to happen.

I was proud to see Issa say what we all say and are thinking. It’s great to see Black people recognized for their talents, especially for painting us in a positive, innovative and realistic light. It’s great to see people with brown faces and Black hair (in all forms that people sometimes can’t deal with) stand front and center and accept awards for being true to themselves. And more than anything, it’s just nice to see us continue to open doors, to be the first Black women writers and directors and actors to win, and to encourage the next generation of young Black storytellers to know that they can do the same. When you know where you’ve been and see where your people have been able to go despite all of that, it’s exciting, and yeah, even more of a reason to root for our own.

But for those saying that it would be racist the other way around, you’re on to something. It has been said time and again that since White people are the majority (at the moment) and occupy most spaces, especially in Hollywood, there is no need to do the most to extol them much further. They’re already winning. But it should also be noted that we know what it means to be pro-White and root for White people and things. We’ve seen it for ages. We saw it in Charlottesville did we not? Being pro-White often requires one to be against other people and cultures that they feel are a threat to their own. It requires Tiki torches and reminders that particular groups can’t and won’t replace White people and they are the true Americans. To be pro-White, unfortunately, seems to be in response to the consistent feeling of being threatened or worried that you’re not the end all, be all that you thought you were. So sure, if a person who knows nothing about being marginalized said they were rooting for all the white people, it would be a problem. But just because y’all operate like that with such intentions and feelings doesn’t mean the rest of us do.

For Issa’s part in all of this, she hasn’t put out a statement or given much of a f–k about people’s response to her comments. When you know the important reason you say or do something, you don’t have to explain all that to anybody. But she did directly reply to a woman’s angry rant directed at her in true Issa fashion:

In conclusion, she. Said. What. She. Said. Now get over yourself and respect all the Black Girl Magic and Black Boy Joy – or keep it stepping.

Cigar Lifestyle: The Do's And Don'ts