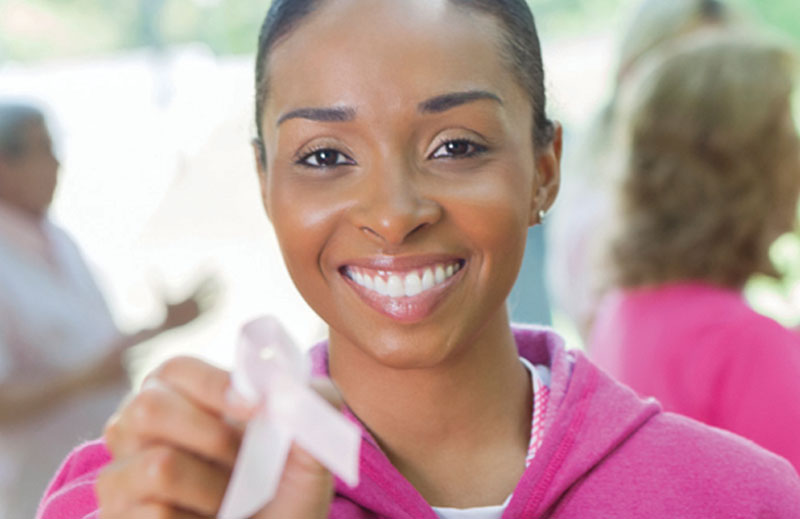 Breast cancer is the second leading cause of cancer deaths among women in the United States, according to the National Center for Chronic Disease Prevention and Health Promotion, and black women are 40 percent more likely to die from it.

There are myriad reasons contributing to that number, but part of the solution is that black women need to be more proactive regarding follow-up care. While black women are reported to undergo routine diagnostic procedures such as mammograms as often as white women (74 percent versus 73 percent every two years, according to the Centers for Disease Control and Prevention [CDC]), they are more often found to have an aggressive and/or advanced cancer diagnosis.

Dr. Kerri Lockhart, 38, a pediatrician at Near North Health Service Corporation in Chicago, understands the sentiment behind those reasons better than most. “I don’t want to know something bad. No one does,” she says. “Especially when it comes to the C word—cancer—no one wants to hear it. But whether or not you get the bad news, the bad news is happening to your body.”

“I was away from home and I remember that I couldn’t sleep. I was lying there and I thought, ‘I haven’t done a breast examine in awhile,’ and I found something.”

Having had a previous history of benign masses, she was not alarmed but did set a doctor’s appointment to check it out. That was the summer of 2010. Her doctor recommended that she follow up with a specialist. After explaining her upcoming residency and the lack of medical insurance, the doctor told her to get it done, but Lockhart says there was no urgency. It didn’t take long for the demands of the job and life to make her forget. In November of 2010, she had a routine appointment with a new physician, who “discovered” the lump again. This time, Lockhart followed up, and after a series of ultrasounds, a mammogram and a biopsy, she was diagnosed.

“I remember sitting there in shock,” she recalls.
“I was with my sister and I just said, ‘I don’t want to die.’”

The reality that illness knows no bounds and does not adhere to racial lines provides little comfort, but there is encouragement in the fact that overall breast cancer mortality rates have steadily decreased since 1989 due to treatment advances, earlier detection through screening and increased awareness. Lockhart says that black women have to take advantage of that by putting themselves and their health first.

“There is a negligence on the part of making us the priority. This black superwoman mentality—we’ll do it all with a smile on our face because we think taking time for ourselves seems self-indulgent, but it’s killing us.”

For Lockhart, it was the support of family and friends and spiritual inspiration that helped her find perspective.

“I see this as a blessing. I mean, if I had to choose, I would not have chosen this, but the way that I’ve been able to be a resource to young women… When I got diagnosed, there wasn’t anyone young, no one black. I felt really alone.”

Lockhart has undergone a lumpectomy, partial mastectomy and radiation treatment and is in remission. She had her last appointment with her oncologist in August 2015, and she will be a five-year survivor in 2016 (after five years in remission, the risk of recurrence dramatically decreases). Her prognosis is good, and she wants black women to make sure that their health is good as well.

“I want to tell black women to really value their health. A lot of [our health problems] are by our own doing,” she says. “I try to teach families (who come into the clinic) to take control of their health. Do something good for yourself every day.”