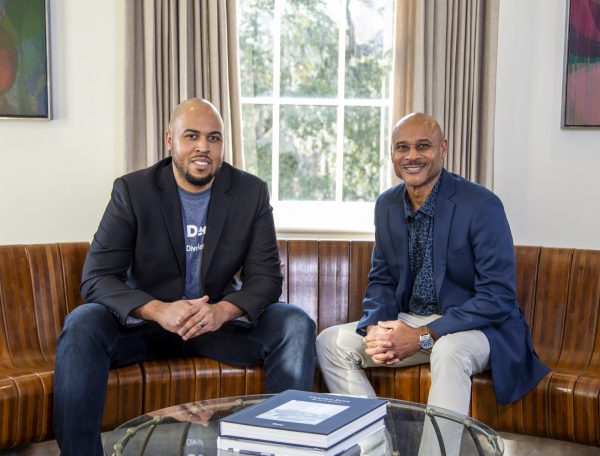 It all started with a New Kids on the Block song.

Deepr co-founder Austin Webster was confused about exactly why he liked the song from the early-90s boy band so much. That took him on a Google search. It led to the discovery that New Jack Swing king Teddy Riley had produced the song. Curious, Webster took his search a step further. Thirty minutes later, after a bit of digging, he made a discovery. The song’s producer is Riley and co-written by Leon Silver of the legendary group The Silvers. He also worked with Riley on several Blackstreet songs. Conundrum solved.

However, the entire 30-minute discovery gave Austin, who has a background in industrial design, a pressing idea. What if that process was streamlined into a simple click of one button? Thus, Deepr was born.

Deepr co-founder Darrell Thompson explains, “We’re kind of like Shazam on steroids. Deepr has a similar audio recognition technology, but, unlike Shazam, we take you deeper.

“We provide the full credits that are available in our database of who wrote the song, who produced it, the featured artists, the background singers. We then allow you to manipulate that,” He finishes, “By clicking on their name, you can get more information on those artists, like bios, and create playlists based upon all the other works the creator has.”

Why Is It Important?

Remember the “Verzuz” battle with Babyface and Teddy Riley? Thompson explains that with Deepr you can pull up every song they’ve written, produced or been involved with. Then you create a playlist.

“And you can do that with any field that we have,” Thompson says. “Everything from who engineered the album. We even have some credits of photographers and art directors who put the artwork together. So we take the music fan on a journey of discovery. And the goal is to help them discover other great artists. We’re trying to make discovering new music fun.”

Thompson, an entertainment lawyer who previously held the position of director of business affairs at Motown Records, says African American involvement in the music tech scene is incredibly important.

“I know the history and influence of urban music,” Webster says. “The current streaming renaissance is because of urban music. If African Americans are not a part of this technological wave of companies that are taking advantage of music, it becomes a situation where we’re being exploited. So we have to be a part of the wave. We want to create situations where we’re appreciated for our contributions.”