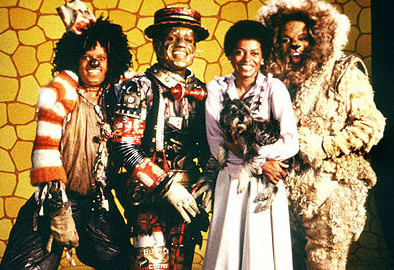 If you haven’t heard the news, NBC is updating The Wiz, the soulful 1978 version of the classic starring Diana Ross as Dorothy, Michael Jackson as the Scarecrow, comedian Nipsey Russell as the Tin Man, Richard Pryor as The Wiz and Lena Horne as Glinda the Good Witch. The musical set to air live December 3 is produced by Craig Zadan and Neil Meron,  the team behind Steel Magnolias starring Queen Latifah, and Cirque du Soleil. Reportedly a Broadway run is intended.

It’s been announced that Kenny Leon, who directed Steel Magnolias, will helm the production but, so far, casting hasn’t been announced. US Weekly has logged its wish list, with Zendaya as Dorothy, Usher as the Scarecrow, Beyoncé as Glinda the Good Witch, Pharrell as the Tin Man, Jesse L. Martin as The Wiz, Titus Burgess from Broadway and Tina Fey’s Netflix breakout hit The Unbreakable Kimmy Schmidt as the Cowardly Lion.

And The Urban Daily has logged theirs, with Beyond the Lights‘s Gugu Mbatha-Raw as Dorothy, Empire‘s Jussie Smollett, Patti LaBelle as Glinda, the Good Witch of the South, Anthony Anderson as the Cowardly Lion, Jennifer Hudson as the Wicked Witch of the West, Taraji P. Henson as Addaperle, Cicely Tyson as Aunt Em, Harry Belafonte as Uncle Henry, Kevin Hart as the Tin Man and Eddie Murphy as The Wiz.