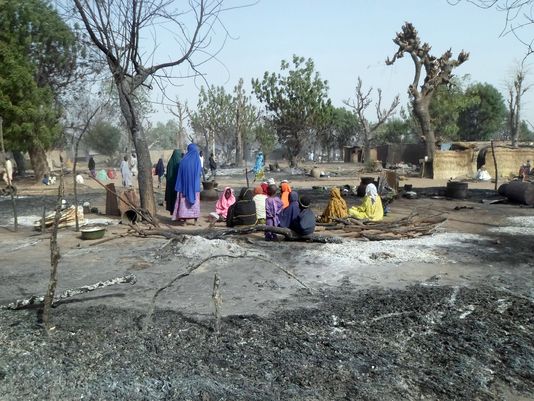 Members of the radical Islamist group Boko Haramapparently burned children alive as part of an attack in Nigeria that killed 86 people, according to reports.

The incident happened Saturday night in the village of Dalori in northeastern Nigeria. Two nearby camps housing 25,000 people who have fled Boko Haram were also attacked.

The Associated Press said it spoke to a survivor who watched Boko Haram extremists firebomb huts and heard the screams of children burning to death. Survivor Alamin Bakura told the AP that several of his family members were killed or wounded in the the attack, which lasted for nearly four hours. It was not clear if Bakura was the survivor who hid in the tree.

A solider at the scene told the AP three female suicide bombers blew themselves up as part of the assault, but there was little information about the sequence of events that led to the deaths of the children and USA TODAY was not able to immediately verify the account.

Mohammed Kanar, the area coordinator of Nigeria’s National Emergency Management Agency, said 86 bodies, many of them charred and riddled with bullets, were collected by Sunday afternoon.

Abba Musa of the country’s State Specialist Hospital in Maiduguri, the largest city in the area, said 62 survivors were being treated for burns.

Nigeria’s Vanguard newspaper reported that the attack came despite claims by the government that Boko Haram militants no longer had the ability to carry out such major attacks, other than through suicide bombings. Nigeria previously said that its military drove the extremists out of towns and villages in the region last year.

For more on this story usatoday